A high-school senior at a private Christian school in Hagerstown, Maryland was kicked off the student council and banned from participating in her graduation ceremony next month because she got pregnant—or, as some critics of the school’s decision say, because she chose to keep the pregnancy rather than abort it before starting to show. Here’s five things you need to know about Maddi Runkles and Heritage Academy:

1. She Has no Prior Disciplinary Record at her School

Many, many people are supporting #MaddiRunkles and we are so grateful for her courage in the midst of difficult circumstances! pic.twitter.com/ohD0QJN79E

As the New York Times initially reported on May 20, Runkles has no prior disciplinary record at Heritage Academy. What she does have is a 4.0 average, a spot on the school soccer team, and a history of serving as president of the student council (though the school has since taken that position away from her).

She also had sex at least once sometime late last year, resulting in her current pregnancy. (Runkles has not identified the father, but said only that he does not attend Heritage, and she does not intend to marry him).

Runkles realized she was pregnant in January. After her pregnancy became obvious, she was suspended from school for two days. The school also considered forcing her to finish her senior year at home, but instead “compromised” by deciding she could finish out the year, but could no longer serve as student council president, nor could she attend her graduation ceremony next month.

2. She Told Her Classmates Before the Principal Could

I sat down w/ Heritage Academy Principal Dave Hobbs, who had this to say abt decision to bar #MaddiRunkles from graduation. @HeraldMailNews pic.twitter.com/8M0QsHjvtN

Runkles told the Times that when she first learned of her pregnancy, she initially tried keeping it a secret, and even toyed with the idea of getting an abortion before anyone knew about it. But she is morally opposed to abortion, and thus decided to keep the pregnancy anyway. She knew that she would face punishment from school authorities “because I did break the school code.”

Heritage principal David Hobbs planned to announce Runkles’ pregnancy to her classmates (this year’s graduating class has only 15 students including Runkles), but Runkles told him she’d rather tell them herself rather than let him do so.

“Some pro-life people are against the killing of unborn babies, but they won’t speak out in support of the girl who chooses to keep her baby,” Runkles said. “Honestly, that makes me feel like maybe the abortion would have been better. Then they would have just forgiven me, rather than deal with this visible consequence.”

3. The School Says She’s Being Punished for Immorality, not her Pregnancy 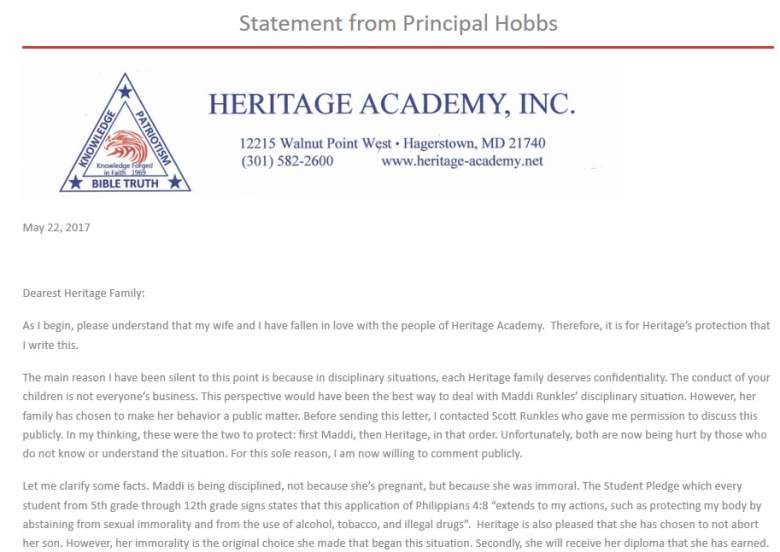 In a May 22 “Statement from Principal Hobbs” posted on the front page of Heritage Academy’s website, David Hobbs wrote “Let me clarify some facts. Maddi is being disciplined, not because she’s pregnant, but because she was immoral. … A wise man told me that discipline is not the absence of love, but the application of love. We love Maddi Runkles. The best way to love her right now is to hold her accountable for her immorality that began this situation.”

Hobbs’ statement points out that all Heritage students in fifth grade and beyond are required to sign a Student Pledge which among other things says that “this application of Philippians 4:8 ‘extends to my actions, such as protecting my body by abstaining from sexual immorality and from the use of alcohol, tobacco, and illegal drugs.'” (Philippians 4:8 says “Finally, brothers and sisters, whatever is true, whatever is noble, whatever is right, whatever is pure, whatever is lovely, whatever is admirable—if anything is excellent or praiseworthy—think about such things,” in the New International Version of the Bible.)

However, some aspects of Hobbs’ statement appear to contradict other information made available about Runkles’ situation. The second paragraph of Hobbs’ public statement starts by saying “The main reason I have been silent to this point is because in disciplinary situations, each Heritage family deserves confidentiality. The conduct of your children is not everyone’s business. This perspective would have been the best way to deal with Maddi Runkles’ disciplinary situation” — in apparent contradiction to the New York Times’ claim that Runkles told her classmates about her pregnancy in order to avoid having Hobbs tell them on her behalf.

Runkles told Breitbart News that the school treated her differently from other students who broke aspects of the Student Pledge. “We sign a student code at the beginning of each school year that we’ll refrain from drugs, alcohol, tobacco, and pre-marital sex, stuff like that. And other kids at my school have been caught drunk, defacing public property, and other things like that, but they’ve never suffered a punishment as severe as mine…. I decided I wanted to confess what I did and ask for forgiveness from my school, but the other kids who had broken other rules – even when they were caught – they still lied about what they had done. It just seems unfair. I tried to make it right, but was still shot down.”

While Hobbs’ statement remains on the Heritage Academy website as of press time, the school’s Facebook page has been taken down.

4. Anti-Abortion Groups Side With Runkles Against the School

Students For Life of America, an anti-abortion group which says its mission is to “Abolish abortion in our lifetime,” responded to Hobbs’ public statement with a statement of its own, posted the next day, which claimed that banning Runkles from her graduation ceremony is notonly unnecessarily punitive, but also downright counterproductive from the perspective of trying to discourage pregnant young women from getting abortions:

Disciplining Maddi is not the issue. Her discipline was decided, communicated, and executed. For the most part, this was done so with care for the family’s privacy and with fair response to the pledge broken (i.e. “abstaining from sexual immorality and from the use of alcohol, tobacco, and illegal drugs”).

However, my primary and continued complaint is that the disciplinary actions of the administration has extended far beyond accountability for the broken pledge regarding premarital sex. That accountability was served justly and humbly in Maddi’s confession, her suspension, and her removal from leadership positions. What was initially a punitive and learning moment has transformed into a public lesson (before this even was announced to the media). By banning Maddi from walking at graduation, the administration and board collectively decided on a disciplinary measure of an obviously public nature.

By banning her and her alone, the administration and board collectively decided to make a public example of one student and has either intentionally or unintentionally communicated to the school community that pregnancy (not simply premarital sex) is a shame and should not be observed within our school community. … From what we’ve learned thus far, no other student in the school’s history has been banned from walking at graduation for failing to abstain “from sexual immorality and from the use of alcohol, tobacco, and illegal drugs.” Maddi is the only student, past or present, banned from walking at graduation.

A Christian blogger for the anti-abortion Live Action News had a similar take after reading Runkles’ story: “It must have been very difficult to stand before your parents and school and admit you were pregnant in your senior year at a Christian high school. But you did it. I carefully read what you said: ‘I told on myself. I asked for forgiveness. I asked for help.’ My heart went out to you. What more could anyone do? Jesus himself said, “Let he who is without sin cast the first stone.” And yet you have been hit with stones. I’m sorry. … While sex outside marriage is considered a sin in the Christian faith, we also recognize something else the Bible makes clear: “If we confess our sins, He is faithful and righteous to forgive us our sins and to cleanse us from all unrighteousness” (I John 1:9). You did that. Before God, you are without sin. Christ has covered this, too.”

5. Her Father Resigned From The School’s Board Over the Matter

How exactly does the men-only school board police boys having sex? They only know she's "immoral" because visibly pregnant. #maddirunkles https://t.co/LrLcOW9zaC

The New York Times reports that Runkles’ father Scott sat on the school’s board when he first lerned his daughter became pregnant (though he recused himself from discussions specifically concerning his daughter).

But the school’s treatment of Maddi made her father angry enough to quit the board — not because she was punished, but over how. “Typically, when somebody breaks a rule, you punish them at the time they break the rule. That way, the punishment is behind them and they’re moving forward with a clean slate,” he told the Times. “With Maddi, her punishment was set four months out. It’s ruined her senior year.”

Another Heritage staffer who apparently sides with Runkles is Jessica Klick, Maddi’s mentor and the school athletic director. The 40-year-old Klick has two sons with her husband, but has also admitted to Heritage Academy students that she had two abortions in her early 20s, saying that her own strict religious upbringing pushed her into that decision—basically, she feared that if she’d carried those pregnancies to term, her parents would have treated her then the way Heritage Academy is treating Maddi Runkles now.

As for Runkles, she plans to attend Bob Jones University, a private Christian college, this fall, and meanwhile is trying to start a chapter of Embrace Grace, an organization which tries encouraging anti-abortion churches to offer practical help to pregnant single women who choose not to abort. Its website says [ellipses lifted from the original] “Most churches advocate life and discourage women from getting abortions, but once a brave and courageous girl chooses life, a lot of times the church then steps away and has nothing to offer her for support at that point. She is then left with nine months of being scared, worried and feeling alone. This is where the Body of Christ can minister …”

Read More
5 Fast Facts, Breaking News
wpDiscuz
21
0
Would love your thoughts, please comment.x
()
x
| Reply
Honor student Maddi Runkles, a senior at a private Christian school in Maryland, has been banned from her graduation ceremony as punishment for getting pregnant—or for not getting an abortion before she started to show.