The operator of several Church of Scientology facilities in Tennessee has charged with multiple felony counts of kidnapping.

Marc Vallieres was arrested in Cannon County and faces two felony counts of facilitation of kidnapping, the Cannon Courier reported.

He reportedly pleaded “by information” in circuit court.

Two other men who have worked at the facility were also arrested and charged for their role in the alleged crimes. They reportedly plead guilty to misdemeanor counts of false imprisonment.

Vallieres had run multiple facilities in Woodbury, about 60 miles southeast of Nashville. His goal at the “treatment centers” was to take in teenagers who struggle with mental issues or drug and alcohol addiction and treat them with his longstanding Scientology-based therapy program.

1. A 9-1-1 Call to Police Led Them to Discovering a Male Locked Inside a Cabin Against His Will 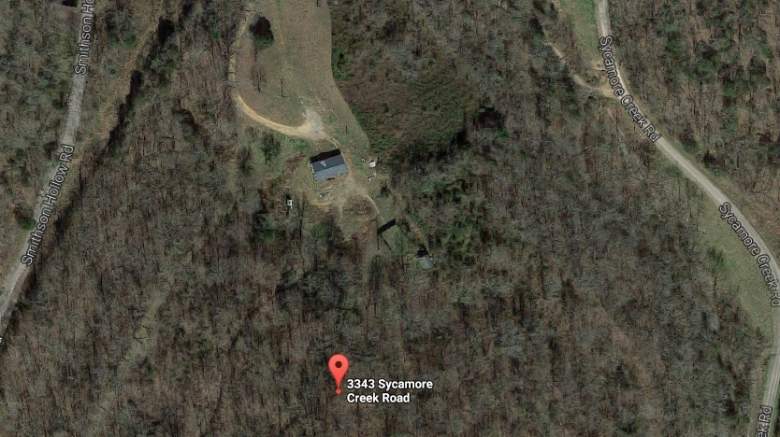 The area believed to be one of the treatment facilities.
(Google Maps)

Authorities in Cannon County received a 9-1-1 call which led them to one of the facilities. They described one of them appearing as a “double-wide trailer with several tiny cabins located behind it,” the Cannon County Courier wrote.

When sheriff’s deputies arrived on scene, they found a secured location that was gated and led to a paddock.

Once on scene and continuing their investigation, authorities noticed the male victim that contacted them staring at them out of a Plexiglas window. They said that he was locked inside of one of the tiny cabins with no possible way to get out.

“He is locked inside the cabin with no way to remove himself from the building,” officers said. “The caretaker unlocks the door and lets us enter the cabin. The cabin is bare there is a small pile of sheets in the corner, there are no obvious amenity for life.”

Once let into the cabin by the caretaker, officers freed the man, who told them that he was being held there “against his will” and was being provided “unknown medications.” He said that he had been at the facility for nine months and the reason he was there was to have rehab and “get cleansed through Scientology,” the complaint said.

After investigating the living quarters, authorities said they found a very small room with a single bed. On the bed was a lone sheet that the man reportedly covered up in with his only source of light being from a bathroom.

Authorities continued to speak with the caretaker of the man, whose name is Dennis Flamond. He reportedly gave them a history of the man that was locked up and told them that the manager of the facility, Hans Snyder Lytle, was in Los Angeles taking Scientology courses.

Responding authorities contacted the Cannon County Emergency Medical Service to assist the victim, and finally officers were able to speak with Lytle via telephone.

“I explained to him that no one on this facility is a licensed healthcare provider and no one here has power of attorney over him,” Lytle said in a police report obtained by the Cannon Courier. “So if he feels that he needs to go to the hospital, then he will have to be transported.”

Lytle was speaking to officers by phone and was later arrested after officers they a search warrant at an address on Cedar Crest Lane.

Two facilities were discovered: the one being investigated with the call from the victim on Sycamore Creek Road and another on Sunshine Lane, both being in Woodbury.

2. The Victim’s Mother Was In ‘Disbelief’ As to Where Her Son Ended Up 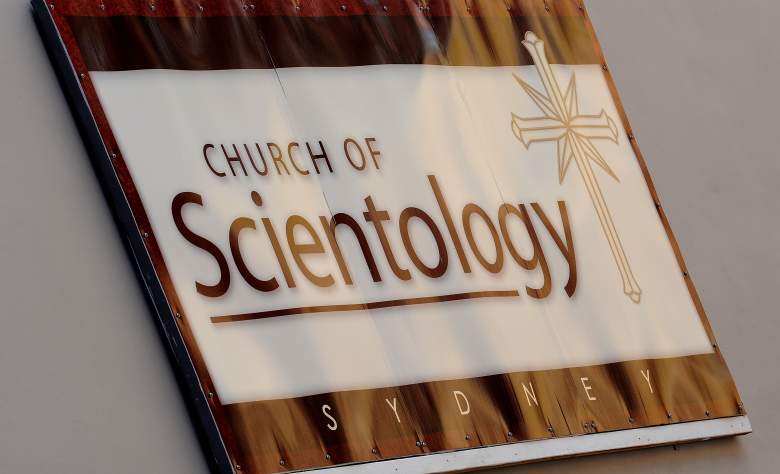 The victim at the facility was taken to the emergency room at a medical facility and the responding officers contacted his mother who was living in Beverly Hills, California.

Gullett said in the police report that the victim’s mother knew where her son was, as he coordinated this trip previously. She said that he found out about the treatment facility on the internet, but it was far different than what was advertised.

We relay to her the events and she is in disbelief, she has never actually seen the facility and is only aware of the conditions from what is available on the internet, which is presented in an entirely different manner than actual living conditions. After about approximately 15-20 minutes of explaining what is going on there she believes us, and at the time of our last conversation she was getting a plane ticket the next morning for Tennessee.

The officers then contacted other agencies such as Adult Protective Services and a search warrant was obtained from a judge.

When officers got back to the facility at 3343 Sycamore Creek Road with their warrant, staff were observed packing things up and moving out. The facility was heavily secured and officers apparently had to use a ram just to get the door open.

They continued their search of the premises and found a female patient that was also transported to a medical facility. Her parents were also notified of her whereabouts and well being.

In addition to that, they obtained multiple “boxes” of evidence that were taken into police custody.

With the investigation still ongoing and charges still pending, the two facilities in Tennessee are now “permanently closed,” a statement issued by the Cannon County Sheriff’s Department said.

“(We) would like to make the general public of (the) county aware that the Scientology facilities are closed and (no longer) operating,” the statement read.

However, attorney David Veile, who represents some of those in the case, said the facilities weren’t operated by the Church of Scientology. 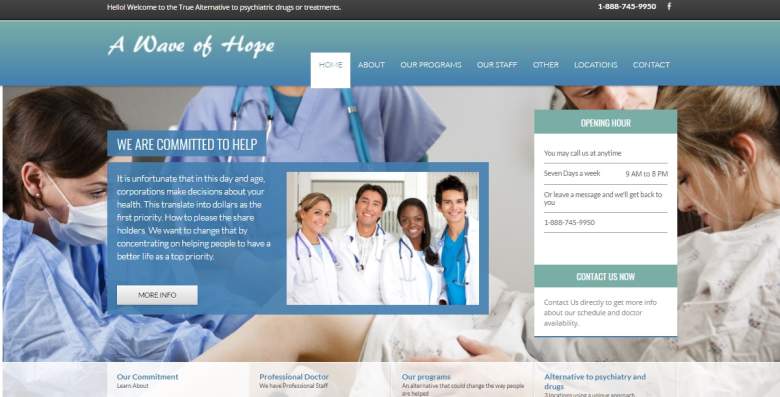 The homepage for “A Way of Hope,” Vallieres’ organization. (A Wave of Hope)

Vallieres is the founder and owner of the “A Wave of Hope” organization, which is described as the “true alternative to psychiatric drugs or treatments.”

His biography on the organization’s website says that he lives in Woodbury, Tennessee on a ranch with his family. That’s where he apparently organized the facility for people with mental difficulties and/or drug and alcohol abuse.

Vallieres moved to Tennessee in 2004 to “begin helping teenagers in trouble.” His biography says that because of his success in achieving his goal, many families began to ask for his assistance with their family members that “became psychotics due to drug abuse or simply because they lived through traumatic experiences and were having a very difficult time.”

The goal of “A Wave of Hope” is to not treat mental illnesses, but to instead “use an approach that increases the well being of a person.” That means it would have an effect not only on the physical side of things, but also on the spiritual side.

4. The Facility Had Been Flagged In the Past for Similar ‘Deficiencies’ 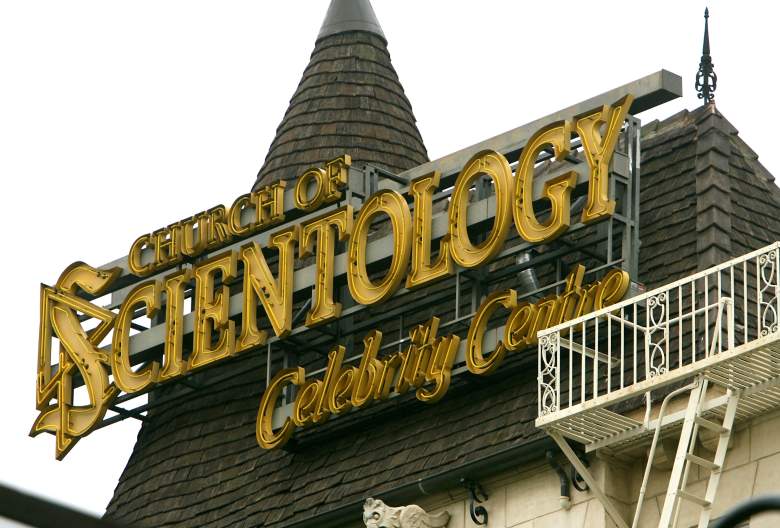 The exterior of the Church of Scientology Celebrity Centre International in Los Angeles, California. (Getty)

A 2014 report in The Tennessean said that Vallieres’ organization was cited for violating many rules that ranged from not doing criminal background checks on its employees to housing people at the facility that actually needed a higher level of care.

An inspection by the Tennessee Department of Mental Health and Substance Abuse about two years ago found that the center, which was licensed by the same agency in 2010, was written up for 21 deficiencies.

One resident that was living at the facility was there “in violation of its supportive living category.” The resident didn’t meet state requirements for self care that included the ability to bathe, eat and take care of their possessions.

See the full inspection report by the agency in the document below:

Vallieres responded to the newspaper’s request for comment by saying, “the person who needs a higher level of care is being moved.”

But those weren’t the only violations. Instead, the report flagged the center for having no couches, chairs, televisions, radios, tables or lamps in a cabin; awfully similar to the most recent development.

It was also flagged for not maintaining any evidence of background checks on two of its employees as well as lacking evidence of abuse checks on employees.

Vallieres said that a waiver was prepared and filed with the agency shortly after to show their compliance.

5. There Are Many Testimonials Online On How Vallieres ‘Helped’ Peoples’ Children 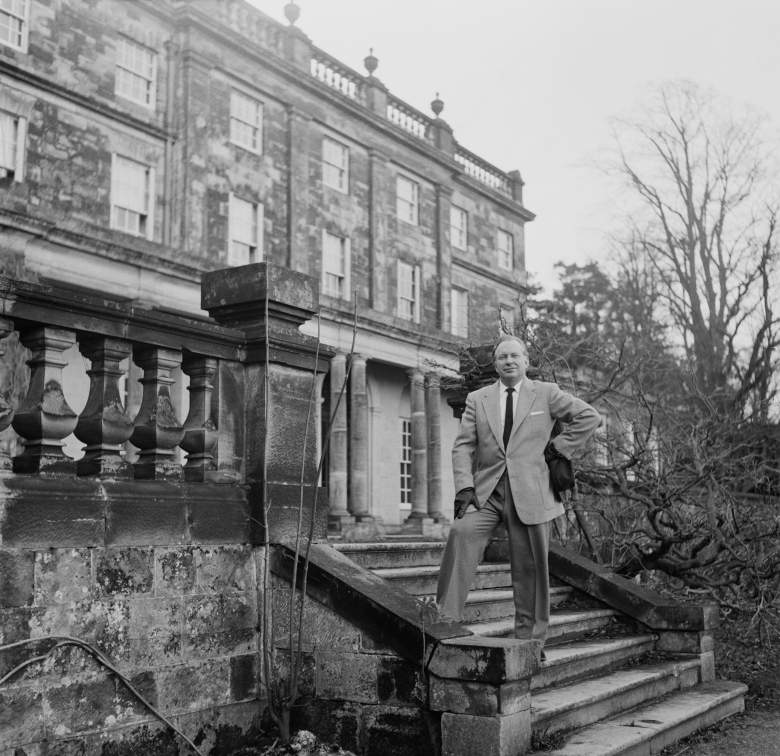 Dr. L Ron Hubbard, the founder of the Church of Scientology, stands outside his Sussex home. (Getty)

Vallieres’ biography says that he “he achieves good results in helping people to have a better life.”

Testimonials posted to the Life Center for a New Tomorrow’s website seem to verify that claim.

One review, written by a person with the initials “JZ,” claimed that their son was violent and out of control after taking a designer drug. The review said that their son would “destroy any apartment or motel room I would rent for him” and that ended with ther reviewer having “no place to put him.” So they turned to Vallieres’ treatment program.

The review said that the alternative therapy that he provides to patients worked for the son.

I found out about Marc Vallieres’ place and asked him if he could help me. Marc went out of his way to accommodate my son. He calmed down quiet a bit. My son began to show marked improvement. He stopped being violent and has not been for months. He has begun to help Marc around the property. He is also cleaning his cabin regularly. He still needs to learn to take showers on his own and he is not ready to function in society. Without the help that Marc provided, I would have lost my son. It is imperative that Marc’s activities be allowed to continue. Psychiatric treatments do not work and the alternative Marc provides is very much needed.

Another review posted by a person with the initials “KM” spoke about a daughter who reportedly took crystal meth for two years. As she continued down her never-ending spiral, her parents refused to put her into a rehab facility for fear of additional drugs “making the situation worse.”

The review said that the woman’s parents decided to send her to Tennessee to work with Vallieres and his program because it provided her a “safe environment,” adding that her treatment ultimately worked.

We asked Marc if he could take care of our daughter by providing a safe environment away from large cities where she could stay. When she lived in the city, she would become involved in drugs and would end up being around people who would abuse her, endanger her and add to her misery. Since she has been with Marc she had improved tremendously. She used to cry every day, she doesn’t anymore. She used to break things around the house. Now, not only is she not doing that, but she helps with house cleaning, cooking and taking care of the animals. She has not touched any drugs or alcohol since she’s been there, almost a year now. We can’t thank Marc enough for what he has done. He has shown incredible care and dedication in helping our daughter; despite the difficulties this causes him and his family. We have found no other place in the United States willing or able to do what Marc is doing. Marc is the only hope we have for our daughter. He needs to be helped in his endeavor.

Those are just two of the many, glowing reviews posted to the website about Vallieres’ program.

Loading more stories
wpDiscuz
1
0
Would love your thoughts, please comment.x
()
x
| Reply
Marc Vallieres was arrested and charged with kidnapping after he allegedly held a man against his will in a Scientology facility in Tennessee.