A stream of Notre Dame students walked out of their university’s graduation to protest the appearance of Vice President Mike Pence.

However, more people remained seated. You can watch the moment on video above.

Pence, the former governor of Indiana, was introduced by a Notre Dame administrator as “a voice of balance, reason and continuity” and praised for his “steady resolve” and for being “a man of principle.” Those remarks were met with applause, but some students then left the auditorium as the vice president began to address graduates.

More than 100 students left the auditorium as Pence began to talk, reported IndyStar, and the action was met with boos and cheering. The students were protesting Pence’s record on LGBT rights, Syrian refugees, and his participation in the Donald Trump administration, reported the Indiana newspaper, which added that students who left the graduation were not allowed back in.

Pence opened his talk by saying, “It’s deeply humbling for me to participate in the 172nd commencement in Notre Dame’s 175th year.” According to The Hill, Pence “touted President Trump’s recent executive order on religious freedom in his address to the Catholic university, as well as Trump’s remarks on religion in Saudi Arabia” and decried political correctness on American university campuses.

SEE IT: Dozens of Notre Dame students walk out in the middle of VP Pence's commencement address. pic.twitter.com/AXb6Ivaysw

According to the Hill, the walk-out was planned and announced in advance. Fox News Insider reported that “dozens” of students walked out on the Pence talk.

Notre Dame students walk out on Pence speechStudents at the University of Notre Dame walk out in protest as Vice President Mike Pence gives a commencement address.2017-05-21T17:02:25.000Z

While Pence was at the Notre Dame graduation ceremony, President Donald Trump was in Saudi Arabia with First Lady Melania Trump, beginning what is a five-day foreign trip, the president’s first. The president, First Lady, and a contingent of other American officials will also visit Israel, Vatican City, and Brussels during the trip, in which Trump on May 21 gave a major speech on terrorism to Muslim leaders.

You can learn more about that trip here: 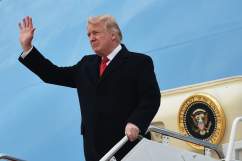