More than 46 countries throughout the world celebrate Mother’s Day. Typical celebrations include attending church, going out to eat, and giving gifts to mothers and grandmothers. Gifts usually consist of a card and a bouquet of flowers.

Modern Mother Day’s celebrations can be traced to the early 20th century in the United States, but the idea of celebrating mothers in the springtime can be traced to ancient, pagan festivals.
Learn more about the history and origin of Mother’s Day here!

A “Maya” girl sits on an altar during “La Maya” tradition in the streets on May 2, 2015 in Colmenar Viejo, near Madrid, Spain. “La Maya” festivity is a pagan tradition to celebrate the beginning of the spring which is believed to come from the medieval age. La Maya combines symbols of fertility and prosperity on agriculture and shepherding economy. A girl “La Maya” dressed with traditional customs sits still and serious on an altar in the street decorated with flowers and plants while the rest of Mayas stand next to her and collect donations. (Pablo Blazquez Dominguez/Getty Images)

While modern Mother’s Day did not directly derive from the pagan celebrations for the goddess and titan Cybele and Rhea, the date and influence of past fertility festivals have made modern Mother’s Day synonymous with the old in many countries. The Legacy Project writes:

The earliest Mother’s Day celebrations can be traced back to the spring celebrations of ancient Greece in honor of Rhea, the mother of the gods. People would make offerings of honey-cakes, fine drinks, and flowers at dawn.

Rhea was one of the titans, daughter of Uranus and Gaea, and wife to Cronus. Her first born son was Zeus, king of the gods and god of sky and thunder. She also birthed Hades and Poseidon, god of the underworld and god of the sea. According to GreekMythology.com, “she started appearing in the fourth century BC; however, she was often depicted with characteristics similar to those used for Cybele, thus making the two goddesses indistinguishable.”

Cybele is an Anatolian fertility goddess that was later spread to the Greeks and Romans. The Roman holiday celebration for Cybele is known as Hilaria. Hilaria was celebrated on the March equinox to honor Cybele and her son/lover, Attis. Attis committed suicide by castrating himself right before his wedding to someone else. Cybele wanted to honor Attis’ life by ensuring that his corpse would never rot or decay. According to the Encyclopedia Britannica, “Attis was fundamentally a vegetation god, and in his self-mutilation, death, and resurrection he represents the fruits of the earth, which die in winter only to rise again in the spring.”

The more northern Gaelic also had their own spring fertility festival known as “Beltane.”

Originally, Beltane marked the beginning of the pastoral season, when livestock were driven out to the summer pastures. In modern times, less agrarian observers usually participate in another mainstay of the Beltane tradition: bonfires. According to BBC, the modern Beltane Fire Festival started in 1988. They write, “During the bonfire, the Green Man is killed as god of winter and reborn as spring to consort with the May Queen.”

Beltane is now celebrated on May 1 as “May Day.”

The Catholic church later incorporated these ideas into Lent during the 16th century and made the fourth Sunday in Lent “Mothering Sunday.” Modern Catholics and protestants also celebrate it but, according to BBC, “Traditionally, it was a day when children, mainly daughters, who had gone to work as domestic servants were given a day off to visit their mother and family.”

2. It was Rebooted During the Civil War

circa 1861: A Yankee soldier shooting a Confederate during the attack on Knoxsville during the American Civil War. Original Publication: From a painting by Thomas Nast. (Hulton Archive/Getty Images)

In the modern world, Mother’s Day always falls on the second Sunday in May. This year will be the 103rd official Mother’s Day in the United States. After a Mother’s Day bill passed both houses in 1914, it was signed into law on May 9 by President Woodrow Wilson.

However, the idea of an official Mother’s Day had been floating around since the Civil War, spearheaded by peace groups mostly made up of mothers. Leading this cause was Ann Jarvis, who created “Mother’s Friendship Day” in 1868. The Legacy Project writes:

At the beginning of the Civil War, Mrs. Jarvis called together four of her Clubs and asked them to make a pledge that friendship and goodwill would not be a victim of the conflict between the states. In a display of compassion, courage, and friendship, the members of these Clubs nursed soldiers from both sides and saved many lives.

After the Civil War, Mrs. Jarvis worked as a peacemaker encouraging families to set aside differences created by the polarization of the war. In 1868, she organized a “Mother’s Friendship Day” to bring together families that had been divided by the conflict.

The first modern Mother’s Day was then held in 1908, three years after Ann Jarvis’ death, by her daughter, Anna Jarvis. 6 years later it was signed into law.

Y'all can still tell your momma happy mothers day without posting it on social media ??‍♂️ don't just do it for the likes lol

After Hallmark and other companies began to dominate American holidays in the 1920s with the advent of the greeting card, Mother’s Day quickly became commercialized.

It is now one of the top holidays for sending greeting cards. According to GreetingCard.org:

Despite its success, Jarvis saw the commercialization of Mother’s Day as everything she was against. She was also upset that President Wilson got credit for it. According to the Deseret News:

Jarvis had envisioned a sweet, even reverential holiday where children would visit their mothers or send handwritten letters. In a thank-you note to Wilson she wrote of a “great Home Day of our country for sons and daughters to honor their mothers and fathers and homes in a way that will perpetuate family ties and give emphasis to true home life.”

5. Father’s Day Is Next Month & was Also Inspired by the Civil War

Sunday, June 18 is Father’s Day 2017 in the United States. It was invented by Sonora Smart Dodd, whose single father, American Civil War veteran William Jackson Smart, raised her and her five siblings. It was first celebrated on June 19, 1910, in Spokane, Washington, two years after the first Mother’s Day was celebrated in Grafton, West Virginia.

After learning about Ann and Anna Jarvis’ mission to make a Mother’s Day at a Methodist church sermon, Sonora got the idea for Father’s Day. According to UMC.org:

In 1909 in Spokane, Wash., Sonora Smart Dodd listened to a Mother’s Day sermon at Central Methodist Episcopal Church. Dodd’s own mother had died 11 years earlier, and her father had raised their six children alone. Dodd felt moved to honor her father, and fathers everywhere, with a special day as well.

She proposed her idea to local religious leaders and gained wide acceptance. June 19, 1910, was designated as the first Father’s Day, and sermons honoring fathers were presented throughout the city.

Lyndon B. Johnson signed a presidential proclamation declaring the third Sunday of June as “Father’s Day.” However, this did not cement the holiday into law until 1972 when President Nixon established a permanent national observance. 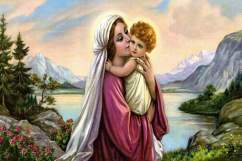 Loading more stories
wpDiscuz
3
0
Would love your thoughts, please comment.x
()
x
| Reply
Happy Mother's Day 2017! In the United States, Mother's Day is celebrated on the second Sunday in May, but the holiday honors the sacrifice mothers make everywhere.