The founder of Xootr and former husband to actress Rae Dawn Chong is missing after a plane he was piloting vanished over the Bermuda Triangle. On May 16, the U.S. Coast Guard issued a press release saying that Nathan Ulrich, 52, was missing along with Skylight Group CEO Jennifer Blumin along with her two sons, Phineas and Theodore.

The plane had left Borinquen in Puerto Rico at 11 a.m. and had been due to land in Titusville, Florida. The coast guard, United States Customs and Border Patrol as well as the Royal Bahamas Defense Forces are involved in the search for Blumin. The U.S. Coast Guard says that Ulrich, from Lee, New Hampshire, was piloting the plane.

My ex-hubby's (Nathan Ulrich) plane is missing over the Bermuda Triangle. I am sad and in shock. So send prayers to his family. Thanks.

In 2011, Ulrich married The Color Purple and Commando actress Rae Dawn Chong. In a tweet about this, Chong referred to Ulrich as her “ex-hubby.” She is the daughter of actor Tommy Chong.

Lt. Commander Ryan Kelly of the U.S. Coast Guard said, via NBC New York, “There’s no indication of significant adverse weather at the time.” The station says that the plane is owned by a company named Ithaca Consulting in Southhold, New York. The CEO of that company is Jennifer Blumin.

Mother of a day @cartabuena #rincon

2. Nathan Ulrich Created the Prototype of a Scooter That Was Used by Steve Jobs

In January 1999, Ulrich, along with his brother, Karl, and Tom Milner, created Xootr, a line high end folding scooters for adults that were “not a geek thing,” according to Fast Company. The idea was Karl Ulrich’s and the prototype was created by Nathan Ulrich.

When the scooter launched, Time magazine named it the “Rolls-Royce of scooters.” While the Penn Gazette says that Steve Jobs used one, as did Tom Brady, Uma Thurman and Jimmy Carter. That same feature notes that the brother’s second venture, a 2001 motorized scooter, Voloci, failed.

According to his LinkedIn page, Ulrich has a doctorate in mechanical engineering from the University of Pennsylvania. He was also formerly a research scientist at Woods Hole Oceanographic Institute. He attended high school at Oyster River in Durham, New Hampshire. Ulrich told EV World that at one point the company was shipping 1500 scooters a week.

Karl Ulrich is a professor at Trump’s alma-mater, the Wharton School of Finance, in Philadelphia. Ulrich said of Karl in the Fast Company feature, “My parents think that he’s absolutely nuts.” That same piece notes that Karl Ulrich has 15 patents to his name as well as three degrees from the Massachusetts Institute of Technology.

Ulrich’s mother is Laurel Thatcher Ulrich, a professor at Harvard of women’s history and the history of early America. In 1976, she famously wrote that “well-behaved women seldom make history.” Thatcher Ulrich has said that she identifies herself as a feminist and a Mormon. At Harvard, she is active in the Latter-day Saint Student Association. Her husband is Gael Ulrich, a chemical engineering professor at the University of New Hampshire.

On April 22, Nathan Ulrich wrote on Facebook, “40 years ago today I became a Latter-day Saint. Deepest, heart-felt thanks to those whose good influence helped change my life for good forever.” Ulrich goes on to thank his mother, siblings and friends for keeping him in the faith. The Ulrich brother’s scooter business was covered by Mormons Today in March 2001.

4. Ulrich Was Not the Father of Blumin’s Children

A New York Times feature on Blumin explained that she was in a long term relationship with New York City architect James Ramsey. Ramsey is the head designer of the RAAD Studio.

The couple’s SOHO home, that Ramsey designed, was the subject of a 2011 Curbed feature. Ramsey described a typical night for the couple saying:

Jen and I cook as much as our busy schedules will allow. We’re both huge food aficionados and we’ve constructed a kitchen area to suit, complete with a blackboard that helps us remember what we’re missing, an in-counter herb garden, and a special hook to hang Ramsey Farms hams, which my family makes in Tennessee.

In the same piece, Blumin described her ideal neighbor as being chef Mario Batali and her ideal dinner guest as former Microsoft CTO Nathan Myhrvold.

5. Nearly 400 people Have Died in Mitsubishi MU-2 Crashes Over the Last 50 Years

The Mitsubishi MU-2 plane has been dogged by safety concerns over the years. In 2004, the International Aviation Safety Authority published a report on the plane titled, “The Deadliest Turboprop Ever?” While Colorado Congressman Tom Tancredo made a statement in 2008 saying, “How many more people need to die … in order for Mitsubishi to recall this aircraft?”

A Flying Magazine feature on the aircraft asked if the crashes associated with the planes were due to bad piloting. The plane has been involved in accidents that have claimed the lives of nearly 400 people over the last 50 years.

In past 100 years, it’s estimated that 1,000 people have been killed in the Bermuda Triangle. An average of four aircraft go missing there every year. 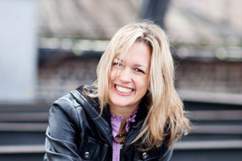 Loading more stories
wpDiscuz
3
0
Would love your thoughts, please comment.x
()
x
| Reply
The founder of Xootr and former husband to actress Rae Dawn Chong is missing after a plane he was piloting vanished over the Bermuda Triangle.