An Indonesian Muslim devotee prays over a Quran as the month of Ramadan continues at a mosque in Surabaya on the eastern Java island on July 8, 2015. Indonesia is the world’s most populous Muslim country. (JUNI KRISWANTO/AFP/Getty Images)

What time does Ramadan 2017 begin tonight? Ramadan is the month when the Quran was revealed to the Prophet Mohammed. Its observance is one of the Five Pillars of Islam.

The dates of Islamic holidays changes every year because the Islamic calendar is a lunar calendar. There’s not a set amount of days in the lunar calendar. The lunar calendar reflects the cycles of the moon, and when it is compared to or tried to fit into a 12-cycle solar calendar (that most of the Western world uses), there are slightly more than twelve lunations (or moon phases) in a solar year.

When the moon is orbiting the earth, the earth is also orbiting the sun. After the earth completes one orbit (a month) the moon must still move a little further to achieve the same angular distance. This time period is called “the synodic month” and it means “having a synod” or “a meeting,” meaning a meeting between the sun and the moon.

It takes the moon about 2 days longer for it to complete its full orbit than the earth with the sun. Depending upon which orbit you follow for a calendar is what kind of calendar you have: a solar calendar or a lunar calendar. Most Asian countries traditionally used some sort of a lunar calendar, including Mongolia, Korea, Japan, and Vietnam. The ancient Hebrew calendar also follows the lunar cycles and is why Passover and other Jewish holidays fall on different dates every year. The observation of a new day beginning with the moon in Islam is also reflected in the Hebrew calendar.

Ramadan is the name of the ninth month of the Islamic calendar. This year, Muslims are celebrating their 1438 calendar year.

To find the times of sunrise and sunset for each day of Ramadan 2017, simply go to IslamicFinder.org and enter your location. 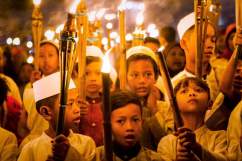 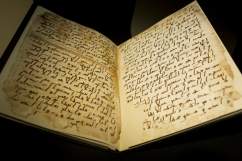 Loading more stories
wpDiscuz
6
0
Would love your thoughts, please comment.x
()
x
| Reply
What time does Ramadan 2017 begin tonight? Ramadan is the month when the Quran was revealed to the Prophet Mohammed. Its observance is one of the Five Pillars of Islam.