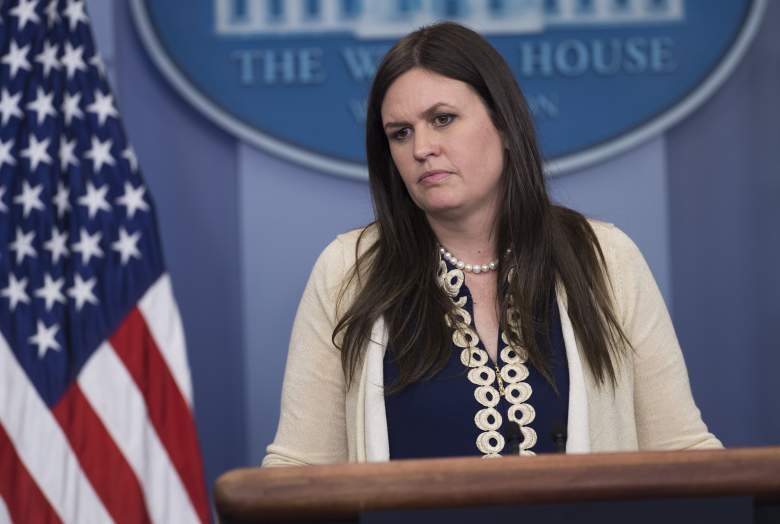 Sarah Huckabee Sanders speaks during the daily press briefing on May 10, 2017. (Getty)

Sarah Huckabee Sanders is the daughter of former Arkansas governor Mike Huckabee, and her earliest political experience came when she worked for her father. During Governor Huckabee’s 2002 re-election campaign, Sarah was the field coordinator. She later worked at the Department of Education under President George W. Bush.

Mike Huckabee did not run for president in 2012, and so Sarah Huckabee Sanders served as a senior advisor to Tim Pawlenty. Then, in 2014, she was an advisor to Arkansas Senator Tom Cotton.

In a statement at the time of Sarah Huckabee Sanders’ hiring, Donald Trump said, “I have great respect for Gov. Mike Huckabee, and we have a mutual admiration for our wonderful families. It is great to have his daughter, Sarah, join the campaign.”

Sarah Huckabee Sanders said in a statement, “I volunteered to join Mr. Trump’s campaign because he is a champion of working families; not Washington-Wall Street elites. Like the other Republican candidates, Mr. Trump is pro-life, pro-marriage and will appoint conservatives to the courts. What makes Mr. Trump my choice for president is he will break the grip of the donor class on our government and make it accountable to working families again. I’m honored to help Mr. Trump make America great again.”

Mike Huckabee did not immediately endorse Donald Trump, but he ended up backing Trump in May 2016.

Throughout the next few months, Sarah Huckabee Sanders frequently popped up on cable news in order to defend the Trump campaign. For instance, after it was revealed that Melania Trump in her Republican National Convention speech plagiarized Michelle Obama, Sarah Huckabee Sanders was interviewed on Fox News and spun this as a positive situation.

“I thought Melania did a great job last night,” she said. “And look, here’s the real question; no one is going to accuse Melania of saying this is the first time she’s ever been proud to be an American, when her husband was nominated to be president. I thought she did a remarkable job…”

When asked who should be fired over this plagiarism scandal, Sarah Huckabee Sanders said Hillary Clinton.

“I think the person who ought to be fired is Hillary Clinton,” she said. “She broke the law and that’s been completely ignored.”

It has been well documented that Donald Trump is highly aware of which members of his staff play well on television, and he was evidently happy with how Sarah Huckabee Sanders represented the campaign.

In January 2017, Sarah Huckabee Sanders was officially given the job of principal deputy press secretary. This means she is the second-in-command in the White House communications office under Sean Spicer.

Recently, Sarah Huckabee Sanders has been filling in for Sean Spicer while Spicer is on Navy Reserve duty. This is only temporary, although CNN reported this week that the White House is considering Huckabee Sanders as a possible permanent replacement for Spicer after they felt Spicer handled the fallout from the James Comey firing poorly.