A 22-year-old University of Maryland student is accused of fatally stabbing a Bowie State University student who was visiting the College Park campus in a random attack early Saturday, police say.

Urbanski is white, and the victim is black. The FBI is assisting in the investigation and will determine if it was a hate crime after evidence showed that Urbanski is a member of a hate group on Facebook.

The victim, Richard Collins III, 23, suffered stab wounds to the chest and was rushed to a local hospital, where he was pronounced dead, NBC Washington reports.

Collins joined the Army and was commissioned a 2nd Lieutenant on Thursday, two days before his death, the news station reports. You can read more about Richard Collins here.

Urbanski, of Severna Park, Maryland, fled from the scene, but was arrested by Prince George’s County Police not far from the scene. Witnesses identified him as the stabbing suspect, police said.

1. Urbanski Stabbed the Victim During a ‘Incoherent & Intoxicated’ Attack That Was ‘Totally Unprovoked,’ Police Say

The University of Maryland Police Department said officers responded to a report of an assault with a knife about 3:05 a.m. on Regents Drive near Montgomery Hall.

“Officers immediately responded to the area and located the male victim on the sidewalk suffering from serious injuries,” the police press release said. “Officers provided medical assistance until paramedics arrived. The victim was taken to a local hospital where he was later pronounced deceased by medical staff.”

According to UMPD, the victim & suspect were found here near Montgomery Hall on edge of campus. It's unclear if either/both were students. pic.twitter.com/YQS5cdvZWt

Police said Urbanski was taken into custody on Regents Drive near Montgomery Hall, not far from the stabbing scene. “Witnesses positively identified the individual as the male who assaulted the victim,” according to police.

Collins was visiting the campus and was waiting for an Uber with two friends when the assault occurred.

UMPD Chief David Mitchell told the Washington Post that Urbanski and Collins did not know each other. He said Urbanski “approached and, totally unprovoked, stabbed the victim in the chest.”

According to police, video of the stabbing was recorded on surveillance cameras. Mitchell said a folding knife was found at the scene and is believed to be the weapon used by Urbanski. Collins was stabbed in the chest.

Charging docs: suspect said "Step left, step left if you know what's best for you" Victim said "no" then was stabbed pic.twitter.com/82Vb76jT0P

Mitchell said at a press conference Sunday night that Urbanski walked up to Collins and his friends and said, “step left, step left if you know what’s good for you.” According to Mitchell, Collins looked “puzzled” and then said no. Urbanski then stabbed Collins, police said.

Collins fell to the ground and Urbanski fled, while Collins’ friends provided medical aid and called 911, according to police. Responding officers and medics performed CPR at the scene and Collins was taken to Prince George’s County Shock Trauma, where he was pronounced dead. 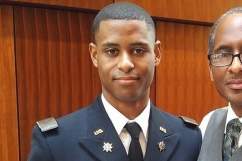 Urbanski is a member of a Facebook group called “Alt-Reich: Nation,” where members post racist and other offensive memes. It is not clear if he was an active member of the group or why he joined.

A motive for the attack is not yet known. Police said Urbanski was drinking prior to the attack, but did not say to what extent. “It’s fair to say the suspect had been drinking,” police said.

Police said the victim, Richard Collins, was with two friends, an Asian female and a white male, who are University of Maryland students, when he was attacked.

UMPD Chief David Mitchell told the Washington Post that though the victim is black and the suspect is white, the attack did not immediately appear to be racially motivated.

But the FBI has since joined the investigation and is now working to determine if it was a hate crime. The Special Agent-in-Charge of the Maryland and Delaware FBI Division Gabriel Johnson said it isn’t uncommon for the FBI to get involved early on when a motive is possibly a crime based on hate.

Johnson said that making that determination “has to be done with the totality of the circumstances. We will wait to make a final determine when the homicide investigation is completed. We are here to evaluate that as an ongoing concern.”

Mitchell said at a press conference that he made the decision to call the FBI after learning of Urbanski’s membership in the Facebook group. He said they are also looking into whether he was in similar groups elsewhere.

“When I looked at the information that’s contained on that website, suffice it to say that it’s despicable, it shows extreme bias against women, Latinos, members of the Jewish faith and especially African Americans,” Mitchell said. “Which brings up questions as to the motive in this case. Knowing that we will continue to look for digital evidence, among other items of evidentiary value.”

Mitchell said he “called upon our close relationship with the FBI. I called and asked for help, specifically with their digital forensics and their ability to scan for items of evidentiary value that could shed light on this case.”

Mitchell said the FBI’s findings will be included in their presentation of the case to the state’s attorney for Prince George’s County, who will prosecute the case.

3. He Was a Student at the University of Maryland, but Wasn’t Set to Graduate This Year

Urbanski was a student at the University of Maryland, but was not set to graduate this week, The Diamondback, the school’s newspaper, reports. On Twitter, Urbanski lists himself as a member of the class of 2017, but it appears he was set to graduate in 2018.

Urbanski is a Kinesiology major, according to his Linkedin profile. He studied engineering from 2013 to 2014 at the University of Maryland, before leaving the school. He then graduated from Anne Arundel Community College in 2016 with an associate’s degree in transfer studies, with a focus on biology, and went back to UMD.

He works in customer service at the Severna Park Lanes in his hometown, a job he’s had since 2012, according to his Linkedin page. 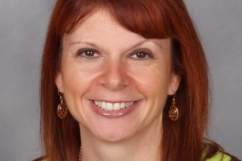 He is scheduled to appear in court for a preliminary hearing at the courthouse in Marlboro, Maryland, on June 15 at 8:45 a.m.

Urbanski does not appear to have a previous criminal record in Maryland. It is not clear if he has hired an attorney.

“It never gets any worse than this,” UMPD Chief David Mitchell told reporters. “When I sat with the victim’s father, who is a military veteran, and his pastor and we shed tears together…I can tell you, it rips your heart out.

“I met with his family earlier today. Needless to say, they’re very distraught. They’re shattered, but they do know that the assailant in this case has been arrested, and he will be appropriately charged,” Mitchell said, according to WRC-TV.

5. Both Bowie State & UMD Planned to Hold Moments of Silence for Collins During Commencement Events

Richard Collins III was a student in the Bowie State College of Business. He was commissioned as an officer in the Army on Thursday after four years in the ROTC program, his mentor, Maurice Haynes, posted on Facebook.

“It is always hard to lose a student to a senseless death. I feel honored and blessed to have known 2nd Lieutenant Richard Collins,” Haynes wrote. “Rest in Peace and may your light forever shine.”

Collins was set to graduate on Tuesday and would have been in the Army’s intelligence division. You can read more about his life here.

Both the University of Maryland and Bowie State University are planning to hold moments of silence during commencement ceremonies this week.

“Words cannot express my deep anguish over this horrific tragedy. My deepest condolences go out to the family and friends of the victim, and to the entire Bowie State community,” UMD President Wallace Loh said in a statement. “I ask that every member of our campus community join me in keeping the victim’s family in their thoughts and prayers. There is strength in our unity as we grieve. For this reason and in solidarity with the Bowie State community, we will honor a moment of silence to begin tomorrow’s commencement exercises.”

Bowie State President Mickey Burnim said the university is in mourning over the “tragic loss of life,” in a statement posted to the school’s website.

“Our first thoughts of condolence go to the family for this tremendous loss of a son, who had the promise of a bright future. Our prayers of concern also extend to those within the Bowie State University community as we try to cope with this tragic loss of life,” Burnim said. “As we struggle to deal with our emotions, let’s find appropriate ways to express our sorrow and hope for justice. Let’s remember our words and actions have the power to heal and the power to hurt. Let’s strive to use our actions to bring comfort and peace.

“When tragedies happen, they can either bring communities together or tear them apart,” Burnim said. I sincerely hope that in the days to come, the Bowie State University community can find a way to come together, lift each other up, and remember the one who we’ve lost.” 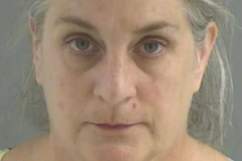