Rather, at several opportunities, Assange has subtly attempted to fuel them, although he has stopped short of confirming or denying the accounts (see a detailed transcript of exactly what Assange has said publicly about Rich toward the end of this article).

However, the Mueller Report, released on April 18, says the hacking was done by the Russian government, not by Seth Rich, and accuses Assange of falsely implying that Rich was behind the hacking. You can read that report here. The Rich mention comes on page 48. The report alleges that Assange and WikiLeaks tried to “obscure” the real source of the hacks – the Russian government.

Skeptics might say that Rich conspiracy theories could distract from allegations that Russia interfered in the 2016 presidential election by hacking DNC emails and leaking them to WikiLeaks. WikiLeaks denies being affiliated with Russia.

The family of Rich is now fighting back against reports that tried to tie their son to WikiLeaks, and a private investigator behind some of them has recanted his comments.

A Fox News report claimed that an anonymous federal investigator claimed to have information about Rich and WikiLeaks. However, Fox has now retracted its story, writing:

According to the New York Times, the Rich family was demanding retractions from Fox. Newsweek is reporting that the FBI is not investigating the Rich murder.

Fox News is now reporting through the anonymous source that there were allegedly links between Rich and Gavin MacFadyen, “a now-deceased American investigative reporter, documentary filmmaker, and director of WikiLeaks who was living in London at the time.” No evidence of this has ever been produced, and it’s an unproven claim.

Rich was shot to death on a Washington D.C. city street in 2016 in a murder that remains unsolved. MacFadyen died of lung cancer on October 22. MacFadyen was perceived as being a journalist who’s friendly to WikiLeaks. He was the director of the Centre for Investigative Journalism in London, investigated whistleblowing claims, and helped raise money to pay for WikiLeaks’ founder Julian Assange’s legal expenses.

Fox News quoted its source as saying, “I have seen and read the emails between Seth Rich and WikiLeaks.” Fox News claims that the federal investigator says “the emails are in possession of the FBI, while the stalled case is in the hands of the Washington Police Department.”

The Fox News report comes the day after a local Fox affiliate in Washington D.C. reported that Rod Wheeler, a private investigator working with Rich’s family, is claiming that evidence shows Rich was in contact with WikiLeaks before he was shot to death in 2016 on a Washington D.C. city street. Rich’s family has since released a statement, saying they have seen no such evidence and maintaining that Wheeler was not supposed to speak with the media without their permission.

Wheeler has stepped back from the Fox 5 account, now telling Fox News that he had no personal knowledge of whether Rich emailed WikiLeaks and said, “I don’t know for sure, I don’t know as a matter of fact if the emails went out to the Wikileaks or anybody else. But it sure appears that way.” He told Buzzfeed that the Fox 5 account was not accurate.

According to NBC News, a lawyer for the Rich family sent a letter to PI Rod Wheeler that said, “Your statements and actions have caused, and continue to cause, the Family severe mental anguish and emotional distress. Your behavior appears to have been deliberate, intentional, outrageous, and in patent disregard of the Agreement and the obvious damage and suffering it would cause the Family. Your improper and unauthorized statements, many of which are false and have no basis in fact, have also injured the memory and reputation of Seth Rich and have defamed and injured the reputation and standing of the members of the Family.”

What has Assange himself said on the Rich matter? He retweeted the Fox 5 article with the Wheeler interview several hours after it aired: 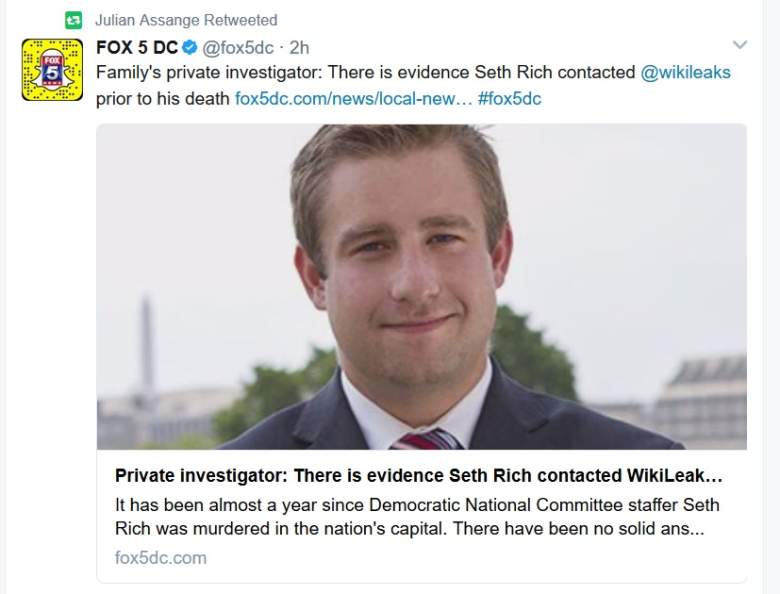 Assange once gave an interview to Dutch television in which he discussed the Seth Rich murder case in Washington D.C. and would not confirm or deny whether Rich was a WikiLeaks’ source. WikiLeaks has also offered a reward in the Rich case.

WikiLeaks, as a matter of practice, does not confirm or deny its sources, however. Still, the comments made by Assange – which he made shortly before WikiLeaks announced a $20,000 reward in the Rich case – drew more attention to the homicide of the young DNC analyst.

Rich, a data analyst with the Democratic National Committee, was gunned down in an unsolved murder case in early July. Conspiracy theorists have claimed – without any evidence to back it up – that Rich might have been the source of DNC emails published by WikiLeaks; U.S. officials and some data experts have said Russian intelligence might be behind the hack. A hacktivist named “Guccifer 2.0” has also claimed responsibility for the DNC hack.

Some interpret the interview Assange gave with NOS, a major public broadcast company in the Netherlands, as admitting that Rich was a WikiLeaks’ source. However, Assange’s actual comments were nuanced and subjective. 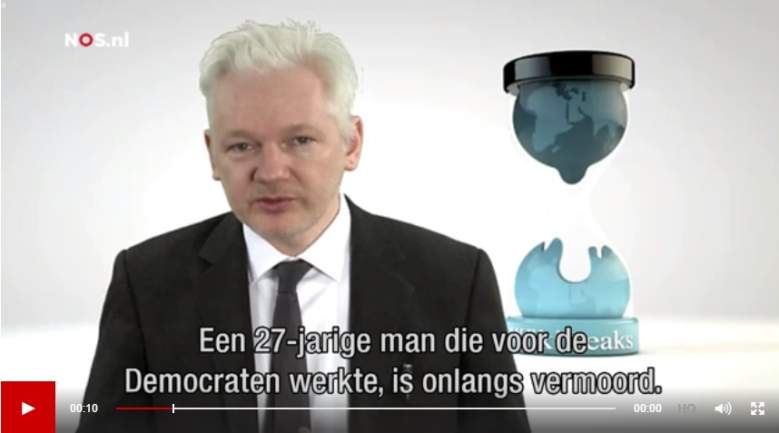 A screenshot of Julian Assange speaking to NOS.

You can see the videotaped interview, which was conducted in English on August 8, here. The Rich comments are in the second video posted with the story.

This is a full transcript of that portion of the interview:

Assange: “Whistleblowers go to significant efforts to get us material, often very significant risks. There’s a 27-year-old that works for the DNC who was shot in the back, murdered, just two weeks ago, for unknown reasons as he was walking down the street in Washington. So…”

Anchor: “That was just a robbery, I believe, wasn’t it?”

Assange: “I am suggesting that our sources, ah, take risks and they, they become concerned to see things occurring like that.”

Anchor: “But was he one of your sources then, I mean?”

Assange: “We don’t comment on who our sources are.”

Anchor: “But why make the suggestion about a young guy being shot in the streets of Washington?”

Assange: “Because we have to understand how high the stakes are in the United States. Our sources, ah, our sources face serious risks, that’s why they come to us so we can protect, ah, their anonymity.”

Anchor: “But it’s quite something to suggest a murder. That’s basically what you are doing.”

Assange: “Well, others have suggested that. We investigated to understand what happened in that situation, with Seth Rich. I think it is a concerning situation. There is not a conclusion yet. We wouldn’t be willing to say a conclusion yet, but we are concerned about it. More importantly, a variety of WikiLeaks sources are concerned when that kind of thing happens.”

WikiLeaks later put out a statement clarifying its position on Rich:

Our original and only statement on the murder of US Democratic National Committee staffer Seth Rich. #DNCLeak pic.twitter.com/Qsjfyb696p