At least two people are dead after a private jet crashed near Teterboro Airport in New Jersey on Monday, authorities said.

The Federal Aviation Administration released a statement saying that a Learjet 35 was on its way from Philadelphia when it crashed in Carlstadt while trying to land at Teterboro.

NEW: FAA statement: "A Learjet 35 crashed on approach to Runway 1 at Teterboro Airport at 3:30 pm today…FAA enroute to the scene." pic.twitter.com/9YPVGvXImv

The two people who died as a result of the plane crash were reportedly both crew members.

A spokesman for Carlstadt told ABC News correspondent Aaron Katersky that there were “no injuries on the ground.”

The plane reportedly crashed a quarter-mile away from the airport, hitting at least three buildings before coming to a stop in a wooded area.

A Learjet 35 has seating for up to eight people on board, but New York City Aviation said on Twitter that there has been no word yet as to how many occupants were on the “corporate jet.” Teterboro Airport is closed for the day but is expected to reopen at midnight Tuesday morning.

The Learjet 35 that crashed in New Jersey can seat 8 people. (This is a stock photo, not the actual plane) pic.twitter.com/imBGYcPzfO

Here are some of the photos and videos from the scene:

Firefighters Worked to Put Out the Blaze

Billowing Smoke Could Be Seen From Miles Away

It Was a Scary View From the Teterboro Tarmac 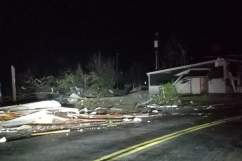 Loading more stories
wpDiscuz
0
0
Would love your thoughts, please comment.x
()
x
| Reply
A small plane crashed at Teterbero Airport in New Jersey on Monday. There was a large fire and huge clouds of smoke. See the photos and videos from the scene.