The New York Police Department has arrested a man near Broadway and West 45th Street, where a car appeared to speed up and ram into pedestrians on a busy New York side walk earlier this afternoon. NYPD has confirmed that the driver of the vehicle, identified as 26-year-old Richard Rojas from the Bronx, is in custody.

The video above shows police walking with a man in handcuffs in Times Square. The New York Post has confirmed that the man — described as “shirtless [and] out-of-control” — is indeed Rojas. He is a U.S. citizen and a former member of the Navy.

The video was originally posted by Instagram user @p_huddy913, believed to be a pedestrian in the area at the time of the incident. His account has since been made private.

Shortly after the incident, which is being referred to as a “mass casualty event,” buildings in the area went into lockdown. Police are still on the scene and an investigation is underway.

Reports indicate that Rojas was being tested for alcohol.

“Law enforcement sources said the driver, who has two DWIs on his record, tried to flee before he was taken into custody. The driver is 26 years old, according to a city official,” ABC News reports.

“He was driving like a madman and screaming,” Michael Rickerby, a tourist from Tennessee, told the New York Post. “It looked like he was trying to hit peopleHe had the angriest, craziest face and he was literally going after people,” he added.

After the crash, Rojas got out of the vehicle and “started trying to punch people and tackle people,” Rickerby told The Post.

Around 12 p.m. Eastern, a maroon Honda sedan “lost control” between 42nd and 43rd streets in Times Square. Witnesses have come forward, saying that the incident appeared “intentional.” However, law enforcement has been hesitant to call this an act of terror. A police official said that this incident is being “investigated as an accident” at this time.

“At this time it doesn’t appear to be terror-related,” New York City Mayor Bill de Blasio told the media. He also said that Rojas has a criminal history.

Nearly two dozen people have been injured and one person has died. The deceased woman has been identified as 18-year-old Alyssa Elsman from Michigan. Her 13-year-old sister was injured. Four people are listed in critical condition. Many of the victims are being treated at Mount Sinai West Hospital, according to CBS New York.

“I saw a woman face-down. I saw a lot a lot of blood coming from her head. It’s been a scary day, but I’m doing fine. I just feel grateful I had the presence of mind to get out of the way,” witness Elizabeth Long told CNN. 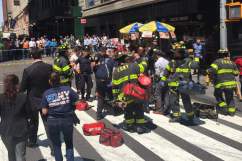 Loading more stories
wpDiscuz
0
0
Would love your thoughts, please comment.x
()
x
| Reply
A man has been arrested in Times Square near the scene of where a car crashed into people on a sidewalk.