Tony Alamo died in prison on Tuesday night. He was 82 years old.

Arkansas authorities report that Alamo (born Bernie Lazar Hoffman) died while in custody at the Federal Medical Center in Butner, North Carolina. The former cult leader was seven years into serving his 175 year term, where he was convicted as a child sex offender.

Alamo’s greatest claim to fame, however, came in the 1980s, when his designer jackets became a fashion staple in pop culture, and clothed stars like James Brown, Madonna, and Michael Jackson. The latter even sported Alamo’s handiwork on the cover of his classic album Bad in 1987. Read on to learn about Alamo, the man Bill Clinton once referred to as “Roy Orbison on speed,” and the other celebrities he quite literally rubbed shoulders with.

1. He Founded the Alamo Christian Foundation In 1969

Alamo founded the Alamo Christian Foundation with his wife Susan in Hollywood, California. It wasn’t long before the church came under heavy scrutiny, however, as it was often cited for its unique brand of evangelization, which included the kidnapping of potential converts.

The church relocated to Arkansas in 1976, where it grew to encompass a large sect of the surrounding community. This included the construction of printing facilities, schools, and even drug rehabilitation areas for recovering addicts. They also developed a national television ministry around this time, where they became known throughout the country. But due to various tax appeals, legal concerns, and the death of Susan Alamo in 1982, the Alamo Christian Foundation was eventually discontinued.

In 1999, the IRS Commissioner found that the cult group “was so closely operated and controlled by and for the benefit of Tony Alamo that it enjoyed no substantive independent existence; that it was formed and operated by Tony Alamo for the principal purpose of willfully attempting to defeat or evade federal income tax; and that it was inseparable from Tony Alamo, and failed to operate for exclusively charitable purposes.” Still, the church’s website remains active today, and you can check out one of their televised ministries above.

2. He Attempted to ‘Resurrect’ His Wife

According to The Washington Post, it was the death of Susan Alamo that sent Tony spiraling away from sanity. Once she was gone, he made all of the decisions for the cult, including who should marry who, who was allowed to eat, and who was allowed to wear clothing. The Post also claims that Alamo took up to six different wives during this period, ranging from adult women to a 15 year-old girl in 1994. When asked about his actions in a 2008 interview, Alamo told NY Daily News that “consent is puberty.”

Perhaps the most discomforting of these claims, however, are those regarding what Alamo did with Susan’s body after her passing. While he eventually buried her on his 300-acre compound in Arkansas, there were many years where he preserved her body in a room at the foundation. Alamo would then command his followers to go and pray to her, hoping that she would be resurrected.The Post reports that this went on for several months.

3. He Designed Jackets For Countless Celebrities

Alamo’s other claim to fame is the creation of his popular rhinestone jackets series in the 1980s. The colorfully designed garments clothed stars like Elvis Presley, Mike Tyson, Prince, and Michael Jackson. According to TonyAlamoNews, he actually had these made for relatively little cost, as he forced the children who lived in the Alamo Christian Foundation to apply the rhinestones to each custom jacket.

The site claims that Alamo “realized that their small hands and fingers were perfect for handling the delicate rhinestones. They were to report to the warehouse directly after school and worked until as late as 10 p.m. in the evenings. They were never compensated for their efforts.”In a 1989 article by the Los Angeles Times, the operation was referred to as an operation of “about 500 church followers doubling as employees.” Times also noted that Alamo’s jackets were making him “a small fortune.”

4. His Jackets Are Still Popular Today

In his heyday, Alamo was selling his rhinestone jackets at a whopping $1,000 each. In 1989, local newspaper the Desert News wrote that “Frankly, everybody who’s anybody has worn Alamo’s designs. Dolly Parton, Conway Twitty, Larry Hagman, James Brown, Elvis Presley, Liberace, Michael Jackson, Prince, Madonna, and Mr. T— that’s just a small sampling of the big names who’ve relied on his costuming artistry.”

And despite Alamo’s age, his status as a sexual predator, and his imprisonment, the sentiment seems to ring true even today. His rhinestone jackets are still viewed as relatively hot items, and are still sold online for close to their original price. Celebrities like Miley Cyrus and Nicki Minaj have been just a few of the contemporary artists who have been seen with Alamo’s designs. You can purchase these jackets right on eBay, and you can check out the different types of Alamo jackets that exist right here.

Though Alamo would have legal problems at various points in the 80s and 90s, his unsavory past finally caught up with him in 2009, when he was charged with taking girls as young as nine years old across state lines to have sex. Alamo’s lawyer Don Ervin claimed that the evidence against his client was “insufficient,” but that clearly proved no matter for the jury, who convicted him on a ten-count federal indictment and sentenced him to serve 175 years in prison. According to NY Daily News, one of the victims who testified told Alamo “You preyed on innocent children. You have the audacity to ask for mercy. What mercy did you show us? What kind of man of God does what you have done?”

District Judge Harry F. Barnes said that Alamo used his status as father figure and pastor and threatened the girls with loss of their salvation. “Mr. Alamo,” he said during the sentencing, “One day you will face a higher judge than me, may he have mercy on your soul.” Alamo’s response? “I’m glad I’m me and not the deceived people in the world.” You can check out a brief special on Alamo, titled, of course, The Tony Alamo Story, below. 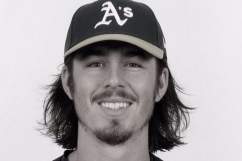 Loading more stories
wpDiscuz
0
0
Would love your thoughts, please comment.x
()
x
| Reply
As the man who designed clothes for Michael Jackson, Prince, and Madonna, Tony Alamo also lived a life fueled by controversy and crime. Learn more about him here.