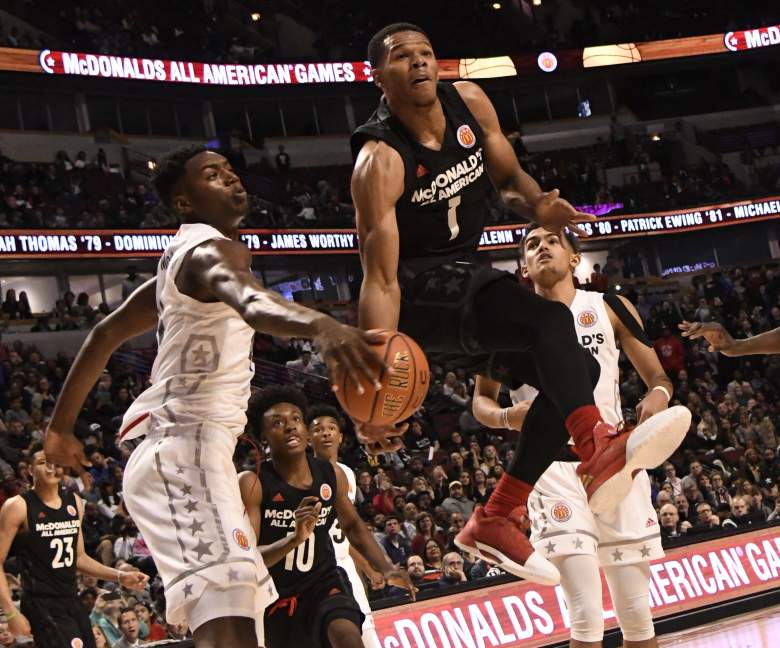 Trevon Duval (middle) announced on Monday he will be attending Duke University this fall. (Getty)

Five-star high school basketball senior Trevon Duval announced courtesy of the Players Tribune on Monday that he will be attending Duke University this fall.

I've made my decision https://t.co/xFiEhULrBj

ESPN’s No. 5 player in it’s Top 100 rankings attended IMG Academy in Bradenton, FL is regarded as the best point guard in the 2017 high school class.

Duval averaged 16.1 points per game and 7.5 assists per game for IMG this past season.

“I’m excited to evolve as a student, as a basketball player and, forever, as a Blue Devil,” Duval said in his announcement.

ESPN ranks Carter, Trent Jr., and Duval in its top 10 while Rivals.com has only Trent Jr. on the outside (No.17).

By adding Duval and two-guard Trent Jr. — Duke now boasts a strong backcourt that will also include Grayson Allen, who will return for his senior season.

Before choosing Duke, Duval was in serious consideration to lead the backcourts at four schools — Arizona, Baylor, Kansas and the aforementioned Seton Hall.

Duval said of the Pirates, “I’ve been to their campus a couple times, I’ve seen it but to visit during the Big East tournament was really special just to see how that all goes. Plus they get to play in the Garden so that was special.”

As for the Jayhawks, Duval indicated in March he would wait to see what junior guard Devonte Graham would do — who ultimately decided on returning for his senior season.

Trevon Duval between the legs dunk at #BILAAG practice!

Earlier this month, freshman guard Frank Jackson surprised many by announcing he would hire an agent in his pursuit to be a first round pick in the upcoming NBA Draft, thus ending any chance at returning to Duke for his sophomore season. Jackson is a projected second round pick, according to DraftExpress.com.

With Allen more of a natural shooting guard and three-star recruit Jordan Goldwire the only other point guard on the roster, one would be safe to pencil in Duval as Coach K’s starting floor general come November.

DraftExpress writes of Duval, “He’s a monster in the open floor, but his decision making skills are still catching up to his athleticism ability in the half-court.”

They add, “Tremendous athlete. Impressive combination of quickness, body control and sheer strength in the open floor. Overpowers smaller guards on a regular basis. Gets to wherever he wants on the floor.”

According to DraftExpress, the 6’3″, 191 lbs guard could go as early as No. 11 in the 2018 NBA Draft. Obviously, this assumes health and that Duval would declare early for the draft.

Currently, DraftExpress lists Alabama recruit Collin Sexton as the first point guard off the board next June.

His jump shot could use some work, as DraftExpress notes:

“Hasn’t made much progress with his jumper. Still looks like he’s shooting bowling balls at the rim. Shoots on the way down, or from his shoulder. Stiff with his release.”

Scout.com points out the potential is there for Duval to develop that all-around game:

5. Duval Was Born in Delaware and Has Played High School for Three Schools Across the Country

Duval spent his freshman and sophomore seasons at St. Benedict’s Preparatory School in Newark, New Jersey, where averaged 12.2 and 15.9 points per game, respectively.

He spent his junior season at Advanced Prep International to play alongside fellow high school stars, Terrance Ferguson and Billy Preston. Ferguson currently plays professional ball in Australia and is expected to be selected in the first round of the 2017 NBA Draft. Preston, ranked No. 17 in ESPN’s Top 100 for the Class of 2017, is slated to attend Kansas in the fall.