The latest chapter in the ongoing saga of airlines accused of poor customer service unfolded last weekend, when United Airlines passenger Navang Oza videotaped a disagreement with a ticket counter employee and alleged his ticket home was cancelled in retaliation.

According to Fox8Live, Oza, who lives in California, was trying to fly home from a trip to New Orleans, and started taping his discussion with the ticket-counter agent after a disagreement arose over checked-baggage fees; specifically, Oza wanted to know why a bag that cost him $125 to check for the flight to New Orleans would cost $300 to check on his return flight.

The video above starts with the United agent looking directly into the camera while Oza’s offscreen voice asks “Why do you want this deleted?” The woman responds “Because you do not have my permission to videotape. If you don’t [delete the video] now, you are gonna be—”

Oza again asks “I wanna know why,” and then, at the video’s 9-second mark, the gate agent turns to someone offscreen and says “Cancel the reservation.”

A few seconds later, when the ticket agent repeats that Oza does not have her permission to videotape, Oza asks “Do you know why I’m videotaping you? Because you guys have terrible customer service.”

United Airlines has apologized for Oza’s experience; in a statement published by Business Insider, an unnamed United spokesperson said “The video does not reflect the positive customer experience we strive to offer, and for that, we apologize. We are reviewing this situation, including talking with Mr. Oza and our employees, to better understand what happened.”

On his Twitter feed, where he posted the initial video, Navang Oza made a two-tweet update on May 10: “I want to thank everyone for their support. I was surprised by how many people reached out with similar experiences (1/2). Hopefully, this increased dialogue will help prevent ordeals like this from happening in the future (2/2).” 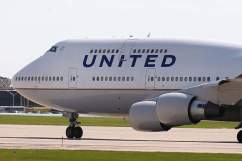 United Airlines Has a History of Bad Customer Service: All the Videos You Need to See