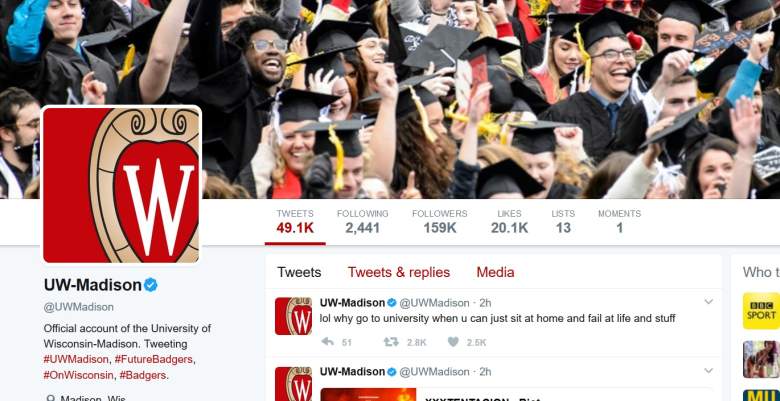 The University of Wisconsin-Madison’s official Twitter page was hacked, and the offending tweets remained up for at least two hours.

The hacker’s opening salvo: “lol why go to university when u can just sit home and fail at life and stuff.”

The UW-Madison Police Department confirmed the hack in a tweet of its own on May 17. “Admins at @UWMadison are aware that their Twitter account has been compromised. Not to fear — it will be back to its awesome self soon,” police tweeted.

Admins at @UWMadison are aware that their Twitter account has been compromised. Not to fear — it will be back to its awesome self soon.

The hacker posted a series of tweets (Heavy has zapped the expletives): 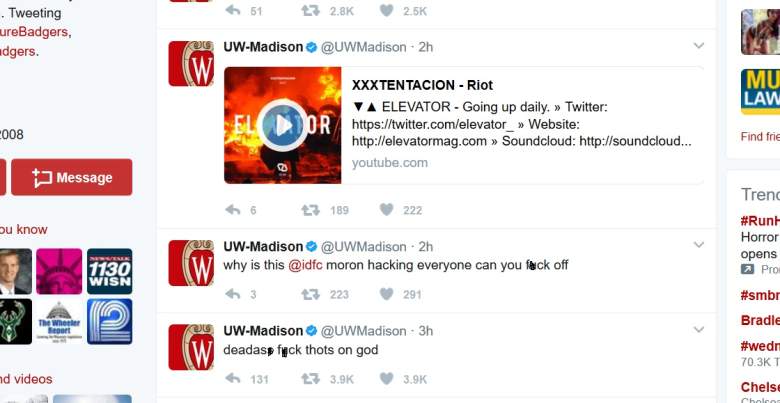 The page for Wisconsin’s flagship university has 179,000 followers. It introduces itself as “Official account of the University of Wisconsin-Madison. Tweeting #UWMadison, #FutureBadgers, #OnWisconsin, #Badgers.”

Normally, the page is filled with nice things like this:

People’s responses on Twitter were funnier than the hacked tweets by far. They included the following comments:

“Um… is it just me or has college education really gone downhill? @UWMadison”

“@UWMadison just keep the tweets up. Not deleting them and just acting like nothing happened is the funniest way to handle this.”

Another person wrote, “I’m here to help with PR 101 @UWMadison.”

People pitied the poor social media manager who woke up to that.

@UWMadison When the social media manager finally wakes up this morning… pic.twitter.com/wgTAVRI7eq

People on Twitter, who received the hacked tweets, didn’t have kind things to say…about the unknown hacker.

“I wish whoever hacked @UWMadison was either funnier or took advantage to make some sociopolitical statements. Do better hackers,” wrote one person.

“I think someone has either hacked @UWMadison twitter account, or they’re complete drunk #GoBigTen,” wrote another. Classes had just ended for the summer.

The university spokewoman told Channel3000 that technicians are trying to solve the issue.