Comedian Kathy Griffin has long been an outspoken figure when it comes to politics and women’s rights. On Tuesday, however, it seemed as though Griffin had gone too far for some people, as she posted a photograph of herself holding a decapitated head that was made up to resemble President Donald J. Trump.

Griffin, feeling the backlash of her actions, has decided to apologize. “I sincerely apologize,” she says in the thirty second video clip, “I am just now seeing the reaction of these images, I’m a comic, I crossed the line… I went way too far.” Griffin added that “the image is too disturbing, I understand how it offends people, it wasn’t funny I get it, I made a lot of mistakes in my career, I will continue, I asked your forgiveness.” Watch the full apology video above.

Me last week: "Surely the media can't get any worse on Trump"

The original images, which Griffin has since taken down, were taken by Florida-based photographer Tyler Shields, who posted video from the photo shoot. The video shows Griffin slowly raising the blooded mask up into the air. “This is fake blood, just so you know,” Griffin says in the video. “I won’t give away what we are doing, but Tyler and I are not afraid to do images that make noise.” You can see one of the remaining photos above.

The backlash that Griffin received was harsh and immediate, as citizens and fellow celebrity figures voiced their shock at the graphic image. Among these people were Chelsea Clinton, daughter of former President Bill Clinton, and former Massachusetts governor Mitt Romney, who tweeted that “our politics have become too base, too low, and too vulgar, but Kathy Griffin’s post descends into even more repugnant & vile territory.” Read the additional tweets below:

This is vile and wrong. It is never funny to joke about killing a president. https://t.co/zIiuKoMyFw

In a publicity stunt era, Kathy Griffin's act breaches all standards of acceptability. Now let's stop giving it the attention she desired.

Our politics have become too base, too low, & too vulgar, but Kathy Griffin's post descends into an even more repugnant & vile territory.

Hey @CNN – will Kathy Griffin be hosting your New Year's Eve show again? Your advertisers would like to know. pic.twitter.com/ngzHbBcPhN

There has also been an outpouring of those who feel that CNN should severe ties with Griffin, who is set to serve as the network’s host during the 2018 New Year’s Eve special alongside Anderson Cooper. Many believe that Griffin’s actions are heinous and therefore not befitting of someone who should appear on a news network. #FireGriffin has even become a trending hashtag on Twitter.

What Kathy Griffin did is nothing short of direct calls of violence against @realDonaldTrump.

Do the right thing @CNN and #FireGriffin.

Kathy Griffin is getting what she wants – which is attention.

The key is to focus on CNN's advertisers. https://t.co/aIhyaplafy

If CNN doesn't completely cut ties with @kathygriffin, it will expose them yet again as a disgraceful network.

CNN, by refusing to fire Kathy Griffin, has lost all moral high ground (not that it had it).

Thank you for showing your true colors today!

This is not the first time either Griffin or Trump have been in this situation. Among other controversies, Earlier Griffin caught heat earlier this year for her comments regarding the Catholic Church, as the Catholic League claims that she considers herself a “complete militant atheist” and that she finds Catholicism to be “stupid.” This is a controversial sentiment that dates back to the beginning of Griffin’s career as a comedian.

As for President Trump, he was also the target of a “murder” hoax in March when a man resembling Trump appeared in the Snoop Dogg music video “Lavender.” In the video, the man resembling Trump is dressed up with face-paint, to resemble a clown, while Snoop points a gun at his temple. The video caused a great deal of backlash, though the rapper refused to apologize. You can watch “Lavender” right here.

UPDATE: CNN has confirmed that Griffin will not be hosting the New Year’s Eve special. 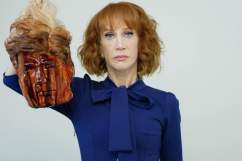 Loading more stories
wpDiscuz
25
0
Would love your thoughts, please comment.x
()
x
| Reply
Comedian Kathy Griffin has responded the to backlash she received after posting a video of her holding the 'decapitated' head of President Trump.