! Watch this, even if you don't speak French: Le Pen plagiarizing verbatim a mid-April speech from Francois Fillon. pic.twitter.com/JHo5YODxHS

Marine Le Pen, France’s far-right presidential candidate whose nationalistic and anti-immigration platforms have invited multiple comparisons between her and Donald Trump, is facing accusations of plagiarism after critics say large portions of a speech she gave on Monday appeared to be lifted wholesale from a speech which former French prime minister (and former presidential candidate) Francois Fillon gave only two weeks earlier.

The video embedded above shows Fillon’s speech played simultaneously with Le Pen’s; even without understanding French, the similarities are obvious. The news service AFP reports that on April 15, Fillon gave a speech in Puy-en-Velay which, among other things, mentioned the geography of French national borders, discussed the beauty of the French language and mentioned a third “French way” for the 21st century. He also quoted Georges Clemenceau, France’s prime minister from World War One, and French writer Andre Malraux.

On May 1, Le Pen gave a speech in the Parisian suburb of Villepinte (where dozens were injured in a bonfire explosion at a Carnival celebration last month); in her speech, she used identical quotes from Clemenceau and Malraux, and also repeated almost verbatim Fillon’s comments about French borders, the French language and the “French way” for the 21st century.

However, Florian Philippot, the deputy chairman of Le Pen’s National Front party, told the AFP that Le Pen’s apparent plagiarism was actually “a nod to a short passage in a speech about France,” which shows that Le Pen “is not sectarian.” 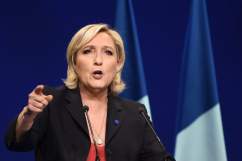