A day after President Donald Trump fired FBI Director James Comey, Russian Foreign Minister Sergey Lavrov appeared in front of the press with United States Secretary of State Rex Tillerson. Andrea Mitchell asked him if their meeting was shadowed by the firing.

“Does the Comey firing cast a shadow over your talks, gentlemen?” Mitchell asked the two.

Lavrov then appears to shrug and roll his eyes.

Lavrov will meet with President Trump today in his first visit to Washington since August 2013. However, the timing of the meeting has been scrutinized by pundits, politicians, and civilians alike. Yesterday, White House spokesman Sean Spicer announced that Comey had been fired over his handling of the investigation into Hillary Clinton’s emails during the presidential campaign. However, the New York Times writes, “Separately, the F.B.I. also is investigating whether members of the Trump campaign colluded with Russia to influence the election.”

The abrupt dismissal of Comey has raised the question as to who will take the leadership of an ongoing counterintelligence investigation about Trump’s controversial election. The investigation is determining whether associates of Trump may have been aided by Russia to sway the outcome of the presidential election against the Democratic candidate Hillary Clinton. The dismissal was effective immediately. According to the Washington Post, “Comey was fired because senior Justice Department officials concluded he had violated Justice Department principles and procedures by publicly discussing the investigation of Hillary Clinton’s use of private email.”

Comey found out about his dismissal on television first.

Lavrov and Mitchell have a tumultuous history. While Mitchell asked questions to Lavrov in April before a meeting between his Russian diplomatic team and Rex Tillerson’s American delegation, Lavrov stopped to asked Mitchell, “Who was bringing you up? Who was giving you your manners, you know?”

Watch the exchange above. 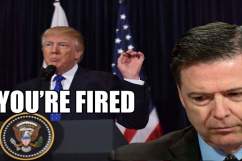 Trump Fires Comey: All the Memes You Need to See