Video of the moment shows that Maher used the racial slur during a conversation with Republican Sen. Ben Sasse of Nebraska.

Sasse was on Real Time With Bill Maher on June 2. The show airs on HBO. You can watch the video of Maher using the slur here.

“Adults dress up for Halloween, they don’t do that in Nebraska?” Maher asked.

“It’s frowned upon,” Sasse replied. “We don’t do that quite as much.”

“I gotta get to Nebraska more,” Maher said.

“We’d love to have you work in the fields with us,” said Sasse.

“Work in the fields?” responded Maher. “You said it. I’m a house n**ga.” Maher held up his hands as he uttered the slur, smiling, and the audience applauded. Sasse grinned in response.

People on social media don’t think it’s funny; they think Maher – who is known for his controversial, outrageous comments – has finally crossed the line this time. People also criticized Sasse for not speaking up in opposition when Maher uttered the slur.

“Bill Maher has never been likeable, funny, sensitive, or aware, and it was only a matter of time til his exposure as a blatant racist.”

“Can we all as a society agree that Bill Maher is not a rep of the liberal voice? Because I’m pretty f**king sick of him.”

“Hey, Bill Maher…you’re white. You can’t call yourself a “house n***er” UNDER ANY CIRCUMSTANCES. #RealTime.”

“…looks like Bill Maher just pulled a Kathy (Griffin)..Does the media give him a pass?”

Multiple people compared Maher’s use of the racial slur to Griffin. The analogy: A comedian known for causing outrage going too far, at last.

"I feel broken. Ben Sasse broke me. He laughed when I said 'Houseni**a'. He didn't stop me. My career is over. I'm broken." –Bill Maher pic.twitter.com/nNjUpgYSQb

Griffin, of course, is under fire and losing gigs because she posed for a photo holding a mask that was supposed to resemble Donald Trump’s bloody and decapitated head. On June 2, Griffin held a press conference with a lawyer in which she positioned herself as the victim, accusing Donald Trump and his family of bullying her. Trump and members of his family had criticized Griffin’s use of the severed head prop, and news reports said 11-year-old Barron Trump had initially thought the severed head was actually his father when he saw it on television.

Time will tell if anything happens to Maher as a result of the racial slur being uttered on television. 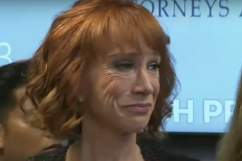