The hunt by for a fugitive ended with three people being killed in a Greenville, Texas car dealership on Tuesday, and it was all caught on video by a bystander.

The two bounty hunters, Fidel Garcia Jr. and Gabriel Bernal, were killed along with the fugitive — Ramon Hutchinson — in a stunning shootout at the dealership. It started with Garcia and Bernal entering the business and locating the Hutchinson in what appears to be a cubicle.

Garcia and Bernal take out their weapons and point them at Hutchinson inside the cubicle on the showroom floor. The two move closer and scream, “back up” to Hutchinson, who scurries to the floor to retrieve his own weapon, which he apparently dropped. Suddenly a woman is heard frantically screaming, “No!”

Almost immediately after the scream, more panic ensues when a quick series of shots is heard as the bystander who was recording drops to the floor. When the dust settled, the three men were found dead on the ground. Nobody else was harmed in the incident.

Watch the chilling footage in the video below:

According to CBS 11 News, Bernal and Garcia didn’t gain permission or present identification from dealership owner Rick Ford prior to walking into the building and pursuing Hutchinson.

“We didn’t give them permission, but we also didn’t tell them that they had to leave. We were told they were federal agents so we didn’t ask them to leave,” Ford said to the news station. “They were dressed casual. We thought they were plainclothes officers.”

Hutchinson was wanted for felony charges of disarming a police officer, fourth-degree assault of an officer and felony first-degree possession of narcotics in Minnesota. He was being sought by authorities after he failed to appear at his court date in March in Minneapolis.

CBS 11 also reported that Bernal and Garcia were hired bounty hunters that were based out of Corpus Christi. The two men tracked Hutchinson to Greenville after they put a tracking device on his car. He was believed to be living in the area with his girlfriend. 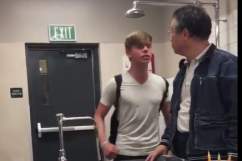 Loading more stories
wpDiscuz
11
0
Would love your thoughts, please comment.x
()
x
| Reply
Two bounty hunters from Greenville, Texas got into a shootout in a car dealership that left them and the fugitive dead. Watch the video of the incident.