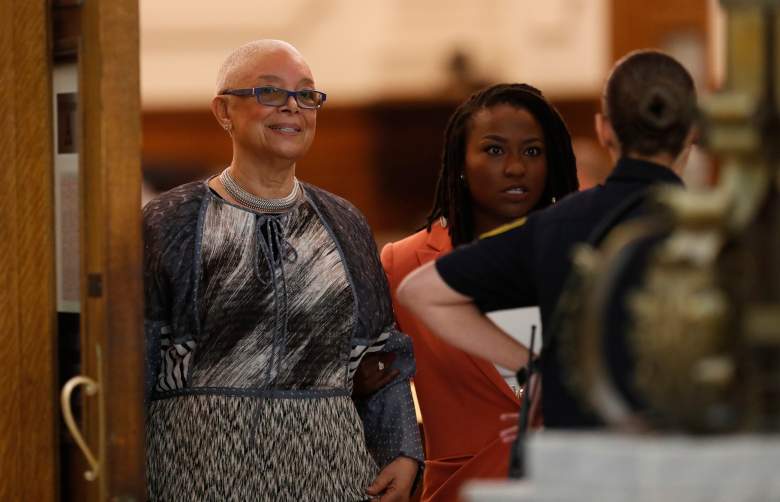 Camille Cosby leaves the courtroom during a break in the sexual assault trial of her husband, entertainer Bill Cosby at the Montgomery County Courthouse on June 12, 2017 in in Norristown, Pennsylvania. (Getty)

Bill Cosby’s wife, Camille Cosby, unloaded on the media, the judge, and prosecutors in an epic, harshly worded statement read by the Cosby defense team after a mistrial was declared in his case.

Camille Cosby, who has been married to Bill Cosby for 53 years, called the DA heinous, the media vicious, the judge arrogant, and accuser Andrea Constand’s attorneys unethical. You can read the full statement by Camille Cosby below.

The judge, Steven T. O’Neill, declared a mistrial on the 6th day of deliberations, after each juror informed the judge that he and she was hopelessly deadlocked over the three counts lodged by the State of Pennsylvania. The District Attorney, Kevin Steele, said that he intends to retry the case, which alleges that Cosby plied Constand with blue pills to make her woozy and then had sexual contact with her without consent. Cosby and his defense team said the contact was consensual. Cosby admitted giving Constand pills and having sexual contact with her in a civil deposition.

Camille Cosby showed up in court for part of closing arguments. After the mistrial, she didn’t appear personally at the courthouse, but Cosby’s defense attorney read her statement aloud.

A statement from Bill Cosby’s wife was read outside the courtroom after mistrial was declared in his criminal trial https://t.co/F5ZSjM6wmZ pic.twitter.com/k5pQKJoyN8

Here is her statement in full:

How do I describe the District Attorney? Heinously and exploitively ambitious.

How do I describe the judge? Overtly and arrogantly collaborating with the District Attorney.

How do I describe the counsels for the accusers? Totally unethical.

How do I describe many, but not all, general media? Blatantly vicious entities that continually disseminated intentional omissions of truths for the primary purpose of greedily selling sensationalism at the expense of a human life.

I am grateful to any of the jurors who tenaciously fought to review the evidence; which is the rightful way to make a sound decision….ultimately, that is a manifestation of justice, based on facts, not lies.

As a very special friend once stated, “truth can be subdued, but not destroyed.”

Moreover, I express humongous gratitude to counselors Brian McMonagle and Angela Agrusa for their hard work. Mr. McMonagle for his passionate and powerful articulations of truths; Ms. Agrusa for her thorough research to bolster Counsel McMonagle; to Mr. Andrew Wyatt for his unequivocal skills in public relations; to our team, who worked diligently and intelligently; to our staffs for their continuous commitment to our family and me….and to our children, grandchildren, and other family who loves us…and to our dear friends and supporters, who never gave up on us, despite it all.

You can read more about the Cosby mistrial here: