Seattle police have released an audio file that captures the moment officers shot and killed a 30-year-old pregnant mother, Charleena Lyles, with her children in the apartment.

You can listen to the audio below or on the police website.

Seattle police released the audio file the day after the June 18 shooting because they said they are trying to be transparent in the shooting death, which is under investigation. The death of Lyles, a mother of four, including a child with Down syndrome, is sparking community and social media outrage. Police say Lyles was armed with a knife, but Lyles’ family says she had mental health issues and that police could have used non-lethal means, like a taser, to deescalate the situation.

Lyles had called police to report a burglary.

In the audio released by Seattle police, police discuss previous contacts they had with Lyles, who had an arrest history.

One officer says, apparently referring to a past incident: “She started talking all crazy about how the officers weren’t going to leave.” There was an officer safety caution listed on her, an officer said. Seattle police have not identified the officers’ names.

“Is this the one with the three kids?” an officer says.

The other says, appearing to refer to a past incident, that she was “making all weird statements.” They discuss previous “DV’ contacts.

The audio is 4 minutes 3 seconds long. It also captures the officers speaking to Lyles, although parts of the audio file are redacted, and parts of the conversation are hard to hear. What is clear from the audio though is that the conversation started out non-confrontational and confirms that Lyles had called police for help due to believing her apartment was burglarized. The audio also confirms the presence of children and that officers had some prior knowledge of mental health concerns.

Children can be heard in the background. Lyles tells officers an X Box was taken.

“Get back, get back” an officer says. “Hey get back, get back.” Right before that, Lyles refers to the officers as “motherf*ckers.” Although the audio can be hard to hear, some interpret that as “get ready motherf*ckers” and one officer tells dispatch “We need help…a woman with two knives.” He tells his partner to tase her but his partner says he doesn’t have a taser.

Added police: “Both officers were equipped with less lethal force options, per department policy. All Seattle police officers receive Crisis Intervention Training. The audio file depicts the conversation between the officers just prior to contacting the caller as they discuss the history of the residence and their concerns. The audio also captured some of the interaction with the caller prior to the rapid development of the use of force incident. Please note that all names as well as the caller’s address and telephone number have been redacted.”

You can read more about Charleena Lyles here: 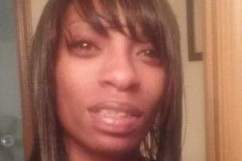 Read More
Breaking News, police shooting, Seattle
Follow Heavy ↓
Charleena Lyles was shot to death by Seattle police, and now they have released an audio recording of the moment of the shooting.