Steve Scalise speaks to the media after a meeting at Trump Tower on December 12, 2016 in New York City. (Getty)

Congressman Steve Scalise is recovering in the hospital after being shot in the hip at a Congressional baseball practice near Washington, D.C. In a statement, Scalise’s office said on Wednesday morning that he would be undergoing surgery.

“He is in stable condition,” Scalise’s office said in a statement. “Prior to entering surgery, the Whip was in good spirits and spoke to his wife by phone. He is grateful for the brave actions of U.S. Capitol Police, first responders, and colleagues.”

Rep. Scalise was critically injured and remains in critical condition. The other patient is in good condition.

The suspected shooter is James T. Hodgkinson, who made a number of anti-Republican posts on his Facebook page. Hodgkinson has since died in the hospital, President Donald Trump announced today.

So who exactly is Congressman Steve Scalise, the representative who was shot on Wednesday? Here’s what you need to know about him.

1. He Has Represented Louisiana Since 2008 & Is the House Majority Whip 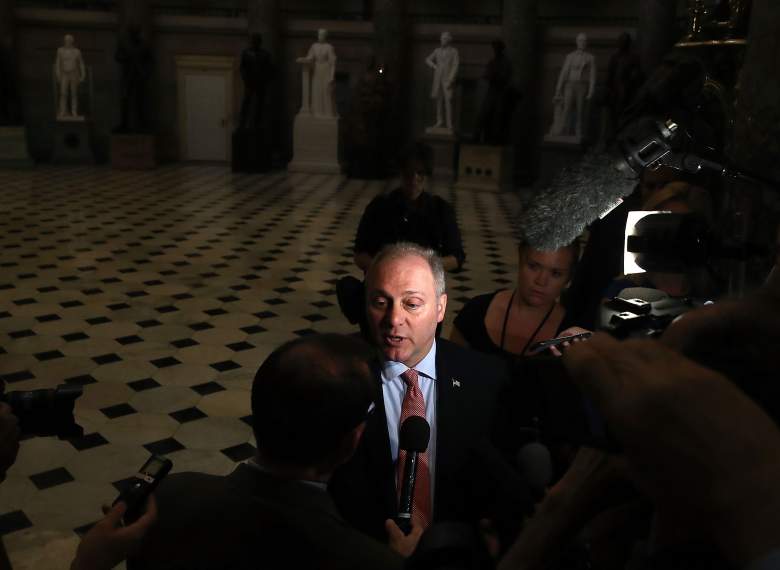 Scalise was elected in a special election to replace Bobby Jindal, who became the governor of Louisiana. In the Republican primary, Scalise defeated a number of opponents including Tim Burns, and in the general election, he defeated Democrat Gilda Reed with 75 percent of the vote.

In addition, Scalise serves as the House Majority Whip. He was elected to this position by his Republican colleagues in 2014. The New York Times described this as a rapid rise in Congress.

“The turning point for Mr. Scalise, who is from Louisiana, was his come-from-behind win in 2012 to become chairman of the influential Republican Study Group, edging out a candidate who was handpicked by the committee’s founders and past chairmen,” The New York Times reported in 2014. “The group, which has 170 members, has played a central role in pushing the Republican caucus to the right on economic and social issues.”

As majority whip, Steve Scalise’s job is to ensure that members of the Republican party vote together on pieces of legislation. In that position, Scalise helped get the American Health Care Act passed in the House of Representatives earlier this year.

“Passing the American Health Care Act was about saving families who are struggling under the weight of a broken law that doesn’t work,” Scalise said at the time.

2. He Is a Supporter & Friend of Donald Trump 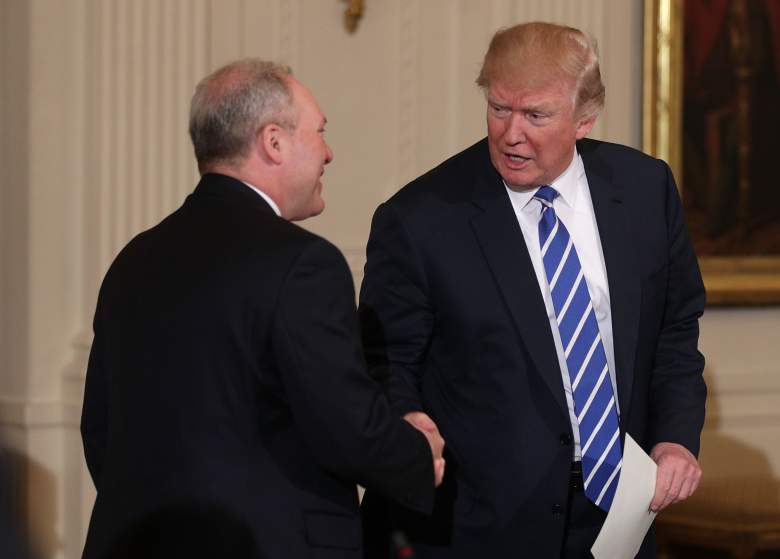 Donald Trump shakes hands with Steve Scalise during a meeting with the House Deputy Whip team at the East Room of the White House March 7, 2017 in Washington, DC. (Getty)

During the 2016 election, Congressman Steve Scalise was a supporter of Donald Trump. Unlike some Republicans, Scalise continued to support his party’s nominee after the leaked Access Hollywood tape on which Trump could be heard bragging about grabbing women by the private parts.

“Let me be clear, Donald Trump will do more to rebuild our middle class, get our economy moving again, strengthen our national defense, and appoint Supreme Court Justices who uphold our Constitution rather than rewrite it,” Scalise told The Advocate. “Those are the reasons I’ve supported Donald Trump for President and that is why I will continue to do so.”

Scalise did call on Trump to apologize for the Access Hollywood tape, which Trump soon did. However, Scalise said that he would not allow Hillary Clinton to become president.

“Electing Hillary Clinton means continuing down the failed path of radical and divisive policies, a weaker military, and rising healthcare costs, or we can elect a president who will work with Congress to create jobs, grow a healthy economy, confront the increasing threats that we face from around the globe, and get America back on the right track,” Scalise said.

“ISIS has said they want to infiltrate a lot of these refugee programs and we’ve seen them carry that out in Europe,” Scalise said. “So we want to make sure that people who are coming into the United States aren’t being infiltrated by terrorist organizations and until that can be done I think this freeze from certain countries, where we cannot vet, makes a lot of sense.”

In March, Donald Trump recorded a special message for Steve Scalise’s daughter on her birthday.

.@POTUS has an important message for my daughter Madison on her 10th birthday! pic.twitter.com/GRlz1YJECh

In a statement to the press today, President Trump said that Scalise is a good friend and a fighter.

“Congressman Scalise is a friend, and a very good friend,” Trump said. “He’s a patriot. And he’s a fighter. He will recover from this assault. And Steve, I want you to know that you have the prayers not only of the entire city behind you, but of an entire nation, and frankly the entire world. America is praying for you and America is praying for all of the victims of this terrible shooting.” 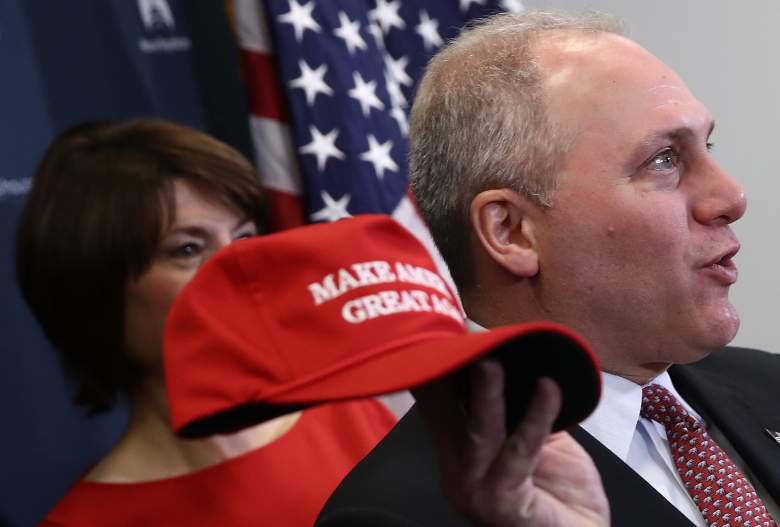 Steve Scalise holds up a “Make America Great Again” hat during a press conference at the U.S. Capitol November 15, 2016 in Washington, DC. (Getty)

During the Trump transition, this was a panel of politicians who advised the president-elect on issues related to guns and the Supreme Court. According to The Advocate, Scalise’s name was added to the list along with 63 others.

Congressman Scalise has been a supporter of the second amendment for years, and he co-sponsored the Firearms Interstate Commerce Reform Act, which had the goal of removing restrictions on interstate firearms transactions.

According to his website, Scalise also co-sponsored H.R.645, “a bill to restore Second Amendment rights in the District of Columbia.” He has an A+ rating from the National Rifle Association.

In January 2016, President Barack Obama signed an executive action on guns which included 10 provisions, such as one requiring more gun sellers to be licensed and forcing them to conduct background checks, according to The Washington Post. Scalise felt this was an overreach on Obama’s part.

“This is an attempt to try to bully and intimidate people from selling guns and from buying guns and goes around the laws that are already on the books,” Scalise said on CNN. “The President is not even enforcing existing law. That’s where he should focus, but frankly he’s trying to change the subject and get away from the fact that he hasn’t been able to defeat ISIS.”

Scalise also said that these people who would be affected by President Obama’s executive order are law-abiding citizens.

“Look, these are law-abiding citizens we are talking about,” Scalise told CNN. “These aren’t criminals. The President won’t even go after people who broke existing federal law. Why doesn’t he do that? Why doesn’t he focus on his job instead of trying to usurp the role of Congress and trump the constitution and the Second Amendment that is so sacred to our nation’s founding.”

4. He Apologized After Delivering a Speech at a White Supremacist Event 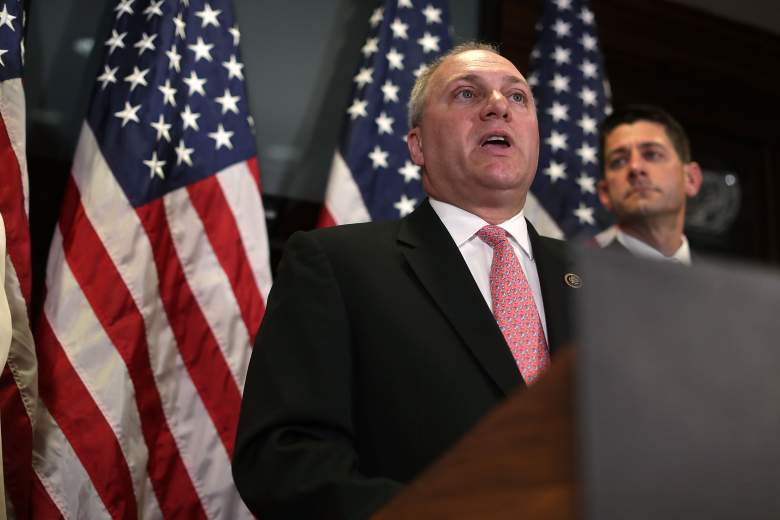 Steve Scalise speaks during a press briefing after a House Republican Conference meeting July 6, 2016 at the headquarters of Republican National Committee in Washington, DC. (Getty)

In 2014, a political blogger discovered that Steve Scalise 12 years earlier had delivered a speech at an event organized by the European-American Unity and Rights Organization, a white nationalist group founded by David Duke. This revelation obviously stirred controversy, but Scalise said that he did not know about the racist nature of the group at the time.

“I didn’t know who all of these groups were and I detest any kind of hate group,” he said. “For anyone to suggest that I was involved with a group like that is insulting and ludicrous.”

Scalise said that he did not properly vet the event and that he only had one staffer at the time.

“I had one person that was working for me,” Scalise said. “When someone called and asked me to speak, I would go.”

The Louisiana congressman also said he regrets speaking at the event.

“It was a mistake I regret, and I emphatically oppose the divisive racial and religious views groups like these hold,” he said.

This incident is something that James T. Hodgkinson, the suspected shooter, was aware of. On his Facebook page, which has since been deleted, he in 2015 shared a political cartoon depicting Steve Scalise speaking to members of the Ku Klux Klan. Hodgkinson wrote that Scalise should have lost his job. 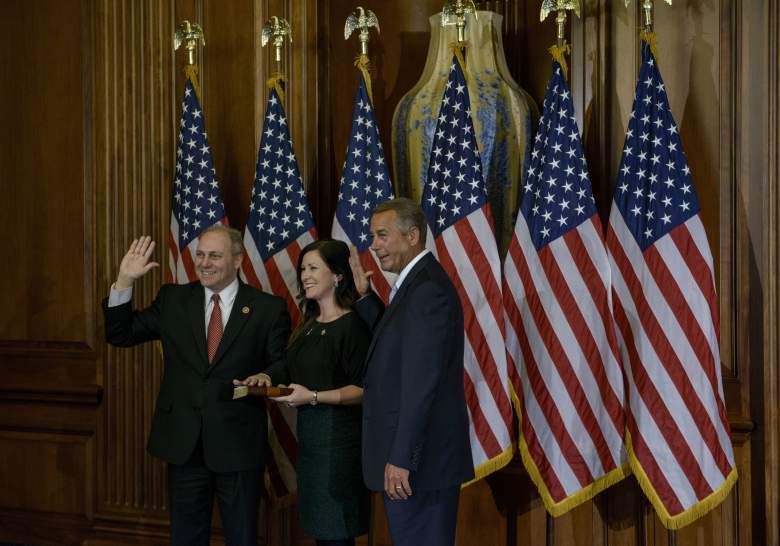 Steve Scalise and his wife Jennifer Scalise during a mock swearing-in ceremony on Capitol Hill January 6, 2015 in Washington, DC. (Getty)

According to the Times Picayune, the Scalise wedding took place at the St. Louis Cathedral in New Orleans. After the wedding, Steve and Jennifer honeymooned in Europe. According to Politico, Steve and his wife are members of the St. Agnes Catholic Church.

Steve and Jennifer have two kids, Madison Carol Scalise and Harrison Joseph Scalise. His son is a member of the Boy Scouts of America.

Madison had her First Communion yesterday. Jennifer, Harrison and I are so proud of her. #Beaming pic.twitter.com/SJa53Le9yj

In a statement to the press on Wednesday, President Donald Trump said that he had recently got off the phone with Jennifer Scalise and that he is with her and her family.

“I spoke with Steve’s wife Jennifer and pledged to her our full support,” Trump said. “We’re with her and with the entire Scalise family.” 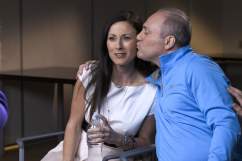