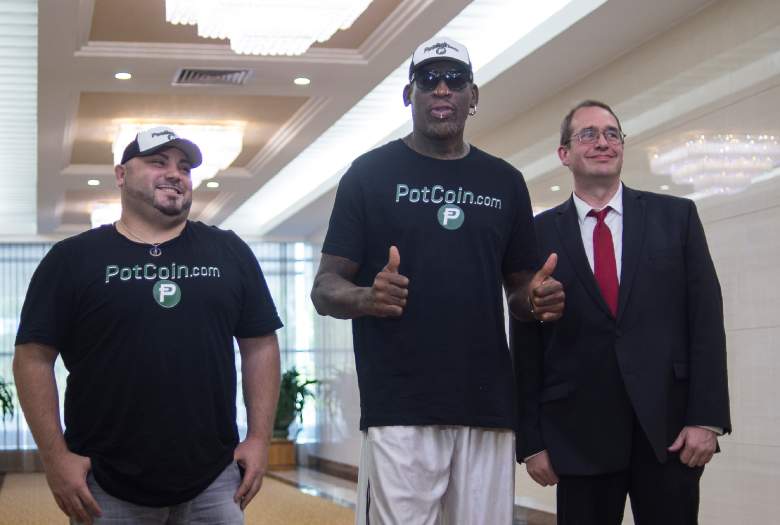 NBA legend Dennis Rodman is back in North Korea, arriving just hours before American Otto Warmbier was released from captivity by Pyongyang. The 56-year-old Rodman has a strange relationship with North Korea’s dictator, Kim Jong Un, leading to speculation that Rodman might have helped Warmbier get released. Rodman has referred to Kim as his “friend for life.”

Warmbier was held by North Korea for 17 months and was sentenced to 15 years of hard labor. The 22-year-old has been in a coma for over a year though, The Washington Post reports. He hasn’t been seen publicly since his trial in March 2016.

The Washington Post’s Anna Fifield reports that Rodman’s visit doesn’t have anything to do with Warmbier’s release. “It’s a bizarre coincidence, perhaps a deliberate attempt by North Korea to distract” from his release, Fifield reported, adding, “The Warmbiers were told that Otto had come down with botulism soon after his trial and had been given a sleeping pill. He hasn’t woken up.”

There has been no confirmed link between Rodman’s visit and Warmbier’s release. South Korean chatter online suggested that the basketball star was going to try to get Wormbier and three other Americans – Kim Hak Song, Tony Kim and Kim Dong Chul.

This is Rodman’s first visit to North Korea since January 2014. However, he has continued to say positive things about Pyongyang and Kim.

Here’s a look at Rodman’s relationship with Kim.

In February 2013, Rodman made his first trip to North Korea and became the first known American to personally meet with Kim Jong Un. Rodman arrived with Vice Media’s Ryan Duffy and three members of the Harlem Globetrotters. CNN reported that Rodman visited for a week and hoped to “entertain and inspire” North Koreans with basketball, a sport Kim loves.

After the trip, Rodman told ABC News that Kim is is friend. “He’s a good guy to me. He’s my friend,” Rodman said in March 2013. “I don’t condone what he does, but as a person to person, he’s my friend.”

In his recent DuJour interview, Rodman even insisted that reports of Kim killing his own members of his family are untrue. (Even the ones North Korea itself has confirmed.)

“You could say anything here about North Korea and people would believe it,” Rodman told the magazine. “The last time I went there, when they said they killed his girlfriend, they killed his uncle, they just fed him to the dogs… They were standing right behind me.”

“My mission is to break the ice between hostile countries,” Rodman told Sports Illustrated in 2015. “Why it’s been left to me to smooth things over, I don’t know. Dennis Rodman, of all people. Keeping us safe is really not my job; it’s the black guy’s [Obama’s] job. But I’ll tell you this: If I don’t finish in the top three for the next Nobel Peace Prize, something’s seriously wrong.” 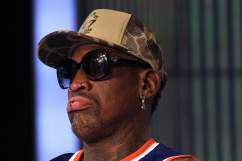 2. Rodman Asked Kim on Twitter to Release Kenneth Bae in May 2013

In May 2013, Rodman used Twitter to ask for the release of Kenneth Bae. It was in direct response to a Seattle Times article.

I'm calling on the Supreme Leader of North Korea or as I call him "Kim", to do me a solid and cut Kenneth Bae loose.

Oddly enough, Bae told CNN in 2016 that he thought Rodman was the “catalyst for my release” and brought more attention to his plight. 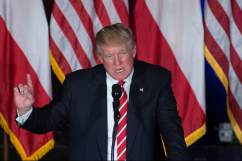 3. Rodman Revealed to the World That Kim Is a Father, Calling Him a ‘Good Dad’

After the September 2013 visit, Rodman revealed that Kim has a daughter named Ju-ae, The Guardian reports. Without Rodman, it’s likely there would have been no way for Western media to know what Kim named his baby.

Rodman told The Guardian that Kim is an “awesome guy” and a “good dad.”

“I held their baby Ju-ae and spoke with Ms Ri [Sol-Ju, Kim’s wife] as well. He’s a good dad and has a beautiful family. Kim told me, ‘I’ll see you in December,'” Rodman told the Guardian.

Rodman also told the media when he returned that he planned to train North Korea’s Olympic basketball team.

“This is about trying to bridge a gap to a country that people say is so bad,” Rodman said in 2013. “This country’s not bad. The marshall now, he wants to change, and I’m there.” He also insisted that his visits were not gimmicks. “It’s about trying to open Obama’s mind,” he said.

Rodman went back to North Korea again in January 2014, this time with other former NBA players to play exhibition games.

CNN broke the news that Rodman was going back to Pyongyang. This current trip is his first time in the country since the January 2014 tour with other retired basketball players.

The purpose of the visit is unknown, but it’s worth noting that Rodman is President Donald Trump’s only link to Kim. Rodman appeared on Trump’s Celebrity Apprentice series in 2009.

During the 2016 presidential campaign, Trump stunned many by suggesting that he would be open to meeting with Kim in the U.S. if there was a “10 percent or a 20 percent chance that I can talk him out of those damn nukes.”

The visit also follows a May 2017 interview with DuJour magazine, in which he continued to praise Kim and North Korea. He said he feared that he might have a problem coming back from North Korea.

Rodman told CNN just before he boarded his plane to North Korea that he hoped to do “something that’s pretty positive.” He would not confirm if he spoke to Trump before going to the isolated country for a fifth time.

First photo: Dennis Rodman arrives in North Korea for the 5th time. He wouldn't tell me if he's spoken to Trump or anyone from the US gov't. pic.twitter.com/aeEvEhkNwD 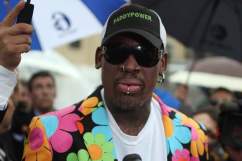 In January 2014, The Daily Beast reported that U.S. Treasury Department investigators were looking into the possibility that Rodman violated U.S. sanctions against North Korea by getting him gifts for Kim’s 31st birthday. It was reported that the gifts totaled over $10,000.

An official told the Daily Beast that the Treasury and State Departments were looking into allegations that Rodman violated the International Emergency Economic Powers Act (IEEPA), which makes it illegal for a person “to have, directly or indirectly, imported, exported, or reexported luxury goods to or into North Korea.”

The findings of the investigation were never reported. CNN notes that Rodman’s gifts and trip were sponsored by Paddy Power, an Irish gambling site. 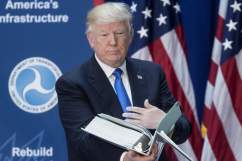 Loading more stories
wpDiscuz
0
0
Would love your thoughts, please comment.x
()
x
| Reply
Dennis Rodman has a strange relationship with Kim Jong Un, the dictator of North Korea, and went back to the country this week. Here's a look at their relationship.