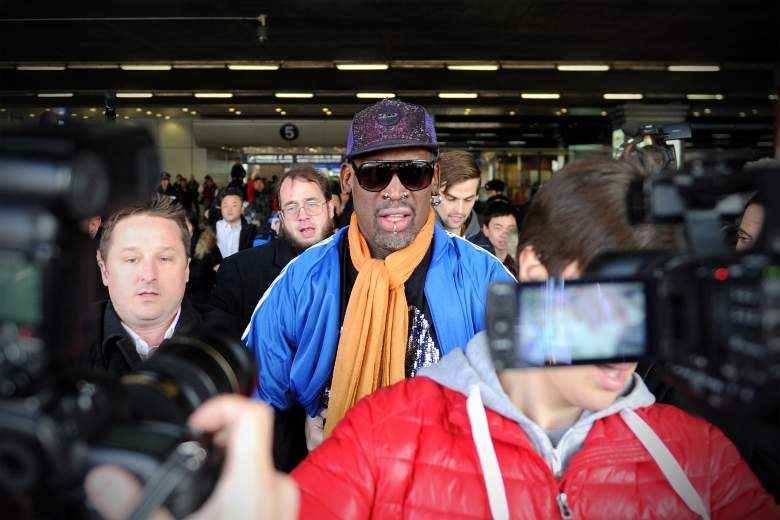 Former basketball player Dennis Rodman is surrounded by the media as he arrives at Beijing International Airport from North Korea on January 13, 2014. (Getty)

Dennis Rodman, the man who’s become the unlikely American diplomat to North Korea in recent years, is on his way to the country for his third time, CNN reported on June 12.

Two sources in North Korea told the news outlet that Rodman, an NBA Hall of Famer, is expected to land in Pyongyang on June 13. He was spotted at Beijing International Airport one day earlier and declined to answer any questions.

If he is indeed on his way to North Korea, as CNN reported, it comes at time of extremely high tensions between the country and the United States.

North Korea has seemingly been testing the hand of the United States by frequently test-launching missiles, and an expert said that it’s feasible the country could continue the launches every two weeks through the remainder of the year.

“While there is no linear pattern to North Korea’s missile tests, if North Korean tests continue at the same pace as they have so far this year we should expect a new missile test every 2.1 weeks and another 13-14 tests,” Troy Stangarone, the Korea Economic Institute of America’s senior director, wrote in a blog posting. “If that is the case, which it may not be, North Korea would exceed last year’s total number of missile tests by 3-4 tests.”

It’s unclear what the reason for Rodman’s visit is this time around, or how long he would intend on being in the country for.

In 2014, Rodman was invited to visit the country by its Supreme Leader Kim Jong-Un, and the former NBA champion insisted that he wouldn’t ever go back to the country if people didn’t want him to.

Rodman said in an interview with ESPN two months after his visit that he just wanted to “do happy things and do great things in life.”

I don’t want people to look at me as the devil or evil person. If I put anyone in harm’s way, I apologize, you know. If you don’t want me to go back there ever again, I won’t go back.

That trip to the country was when Rodman and a couple other retired NBA players arrived to play an exhibition basketball game. He was widely criticized for having a friendship with Kim Jong-Un and even sang “Happy Birthday” to the leader before the basketball game.

After returning from North Korea, Rodman checked-in at an alcohol rehabilitation facility for three weeks saying that he “needed to decompress from all the things (he) was going through.”

Rodman, who is one of the only Americans to have met the current North Korean leader, once appeared on President Donald Trump‘s former TV show, Celebrity Apprentice.

Rodman was “fired” by Trump during the season for spelling First Lady Melania Trump’s first name wrong. He was responsible for using an “i” instead of an “e” in her name.

In March 2017, Rodman told TMZ that he could be the one to brief the president on North Korea.

The 56-year-old Rodman played in the NBA for 14 years and won five NBA championships. He was drafted by the Detroit Pistons in 1986 and played there for eight seasons before spending the next two with the San Antonio Spurs. He is best-known for his time playing with Michael Jordan and the Chicago Bulls.

During his time playing professionally, Rodman was named to the NBA’s All-Defensive First Team seven times and won the league’s Defensive Player of the Year Award twice. He’s largely considered one of the best rebounding forwards in NBA history and was nicknamed “The Worm” by his mother for “wriggling around while playing pinball as a child.”

Loading more stories
wpDiscuz
4
0
Would love your thoughts, please comment.x
()
x
| Reply
A CNN report says that NBA Hall of Famer Dennis Rodman is on his way to North Korea for his third visit to Pyongyang.