A “trap house” in Jacksonville, Florida was raided by police at the same time its resident was showing off the money he’s made selling drugs.

At the beginning of the video, the man is showing leafing through bills of money telling his viewers to “catch up.” He continues telling them that he can’t stop “man” and that the “sh*t don’t stop, man.”

This continues for about a minute before another voice is heard off-camera.

“Open the front door. Give yourself up,” says the voice of an officer. “This is the sheriff’s office.”

The man runs out of view of the computer camera.

The sound of a door being battered down is then heard.

Officers and dogs then sweep the premises before an officer notices the camera is filming. He then takes the camera and faces it away from the action.

Facebook has been used in an increasing amount to document crimes and violence. On Easter, Steve “Stevie Steve” Stephens fatally shot an elderly man in a random attack in Cleveland and then posted the video of the killing to Facebook. He later committed suicide in Pennsylvania, reports CNN.

Earlier this year, a mentally disabled man was kidnapped and tortured on Facebook Live in Illinois. While last year, a man live streamed his suicide on the social media site.

In response to the criminal use of the live streaming service, Facebook added 3,000 employees in May to screen for violence for its nearly 2 billion users, reports The Washington Post. 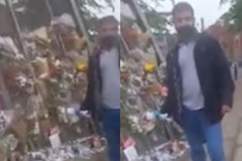 Loading more stories
wpDiscuz
15
0
Would love your thoughts, please comment.x
()
x
| Reply
A "trap house" in Jacksonville, Florida was raided by police at the same time its resident was showing off the money he's made selling drugs.