Darren Osborne was arrested near Finsbury Park after his white van drove into Muslims. Footage of the scene shows people motionless on the street as Muslims dressed in white clothing surround a white man, believed to be Osborne.

Osborne has been described as a 47-year-old-male acting alone. According to new reports, police are calling the incident a terror attack. According to The Guardian, “A man died on the scene but was already receiving first aid from members of the public when the attack took place, police said. It is not yet known whether his death was a result of the attack.” 8 others are injured, 2 seriously.

In the video, Osborne is led away by the police and seems to grapple with them before they shove him off-camera. According to the Muslim Council of Britain, the incident actually occurred outside the Muslim Welfare House, not the mosque proper.

The moment the police are taking the man who ploughed pedestrians in #FinsburyPark pic.twitter.com/Yr7mgS1mcz

The incident happened near Seven Sisters Road right after 12:20 a.m. According to reports, people were leaving the welfare house when a driver crashed into them. According to one witness, bystanders confronted the driver and held him until the police came.

ISIS channels have been talking about the incident after learning that the driver was white.

The Muslims had been taking part in Ramadan services. Some witnesses claim that the victims were Muslims taking part in Tarawih, extra prayers performed by Sunni Muslims at night during the the month of Ramadan. The Muslim Council of Britain has said that their “prayers are with the victims.”

The BBC writes about the mosque, “Finsbury Park Mosque has long been synonymous with the worst fears about Islamist extremism in Britain. The mosque’s new leadership have been struggling to reclaim it for the local community” following the arrest of al-Masri in 2006. al-Masri is serving a life sentence at an American federal supermax prison in Colorado. 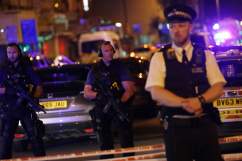 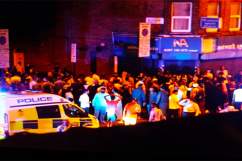 Loading more stories
wpDiscuz
31
0
Would love your thoughts, please comment.x
()
x
| Reply
Darren Osborne is shown being arrested near Finsbury Park after his car drove into a crowd of Muslims. The incident happened near a mosque on Seven Sisters Road.