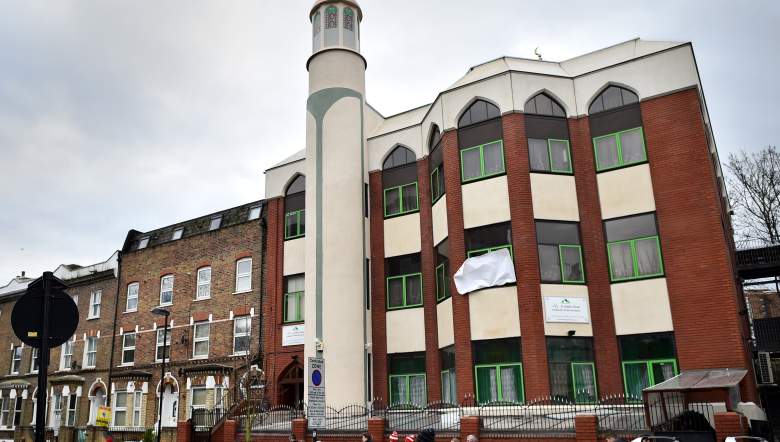 People walk past Finsbury Park Mosque during a mosques open day in London on February 1, 2015. (Getty)

A van veered into crowds and struck pedestrians near the controversial Finsbury Park Mosque in London in what London’s mayor called a “horrific terrorist attack on innocent people.”

The mosque has long been controversial for ties to Al-Qaeda and other terrorists, but it’s tried to remake itself as a place for positive community dialogue, even being visited by some of England’s most prominent politicians.

A man believed to be the driver was surrounded by angry people who kept him at the scene, according to UK Independent.

Multiple reports said that the victims were Muslims and that the suspect expressed hatred toward Muslims at the scene. Obviously, reports of a vehicle ramming into people have become all too familiar as terrorists, some influenced by ISIS, have increasingly used that modus operandi of attack.

1. One Man Was Killed & the Suspect Is Accused of Shouting ‘I Want to Kill All Muslims’

After driving a van into a crowd of people outside Muslim Welfare House near the Finsbury Park Mosque, the unidentified suspect is accused of shouting, “I want to kill all Muslims,” and “I did my bit.”

One person was killed and 10 injured, reported UK Daily Mail, which added that the suspect is 48-years-old.

The Independent reported that police would not confirm reports that “Muslims leaving the mosque after Tarawih prayers performed for the Islamic holy month of Ramadan.”

UK Daily Mail interviewed a witness who describing how the crowd overpowered and detained the suspect.

“I saw a man underneath the van. He was bleeding. My friend said he had to lift the van, I was busy with a man who tried to escape. My friend said he said some words, but I didn’t hear it,” the witness told Daily Mail. “They (people who were hit) were mostly young. They are very bad. I tried to stop him (the suspect), some people were hitting him but I said stop him and keep him until the police came.”

2. The Mosque Was Previously Linked to Al-Qaeda & Other Terrorists 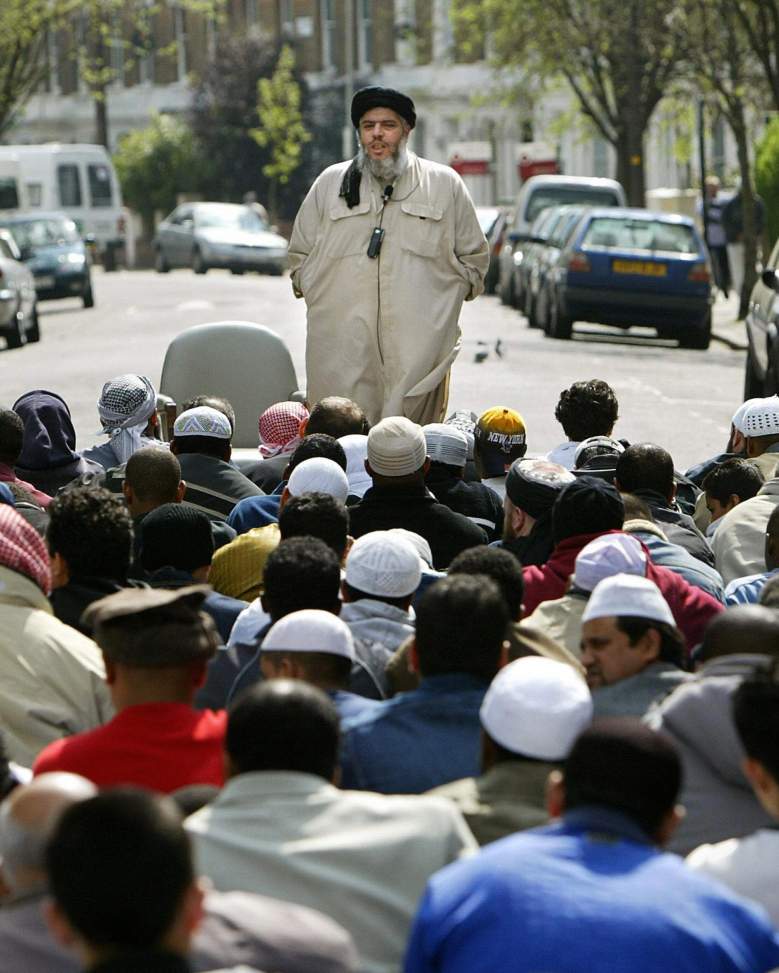 Imam Abu Hamza al-Masri addressing his followers outside Finsbury Park mosque in north London. Radical Islamic cleric Abu Hamza al-Masri should be extradited to the United States to face possible charges on backing Al-Qaeda and involvement in hostage-taking, a court ruled Thursday 15 November 2007. The one-eyed, hook-handed former Imam of the notorious Finsbury Park Mosque in north London, has been behind bars since being sentenced to seven years in February 2006 on charges of race hate and soliciting to murder. (Getty)

The mosque is very controversial for its ties to radical preachers, but it has tried to remake itself in recent years. “The Muslim Community in this area is horrified at this incident and is concerned and shocked at the events,” Muslim Welfare House Toufik Kacimi CEO said in a statement. “We have worked very hard over decades to build a peaceful and tolerant community here in Finsbury Park and we totally condemn any act of hate that tried to drive our wonderful community apart.”

According to BBC, “Finsbury Park Mosque has long been synonymous with the worst fears about Islamist extremism in Britain. The mosque’s new leadership have been struggling to reclaim it for the local community – but that struggle raises questions about who runs mosques in Britain.”

“The £8m Finsbury Park Mosque opened in 1988. And with one of the then biggest prayer halls in Britain, many Muslims regarded it as a major milestone,” BBC wrote. “But by the late 1990s, amid the growth of radical Islamism, it had become a meeting place for extreme voices, including that of Abu Hamza.”

The mosque was visited by “Kamel Bourgass, an Algerian man jailed for the murder of a policeman and an alleged ricin poison plot,” BBC reported.

According to the Telegraph, “The Finsbury Park mosque was long known to have served as a clearing house for radical Muslims after Hamza arrived as imam in 1997. His hate-filled rants inspired attendees such as Richard Reid, the failed “shoe bomber”, Zacarias Moussaoui, one of the 9/11 terror plotters, and Mohammed Sidique Khan, one of the four suicide bombers who blew themselves up on public transport in London on July 7, 2005.”

Islington Gazette noted that the mosque “has been listed – along with a handful of other British Muslim organisations – on a database called World-Check, which is owned by news agency Thomson Reuters.”

Added the newspaper, “The revelations came in a BBC Radio 4 documentary in which journalist Peter Oborne was given access to the list, and found Finsbury Park Mosque’s classification was due to its previous affiliation with radical preacher Abu Hamza in the 1990s and its alleged links to the 7/7 London bombings and shoe bomb terrorist Richard Reid.”

3. Finsbury Park Mosque Claims It Attempts to Work With ‘Everyone’ to Promote Dialogue 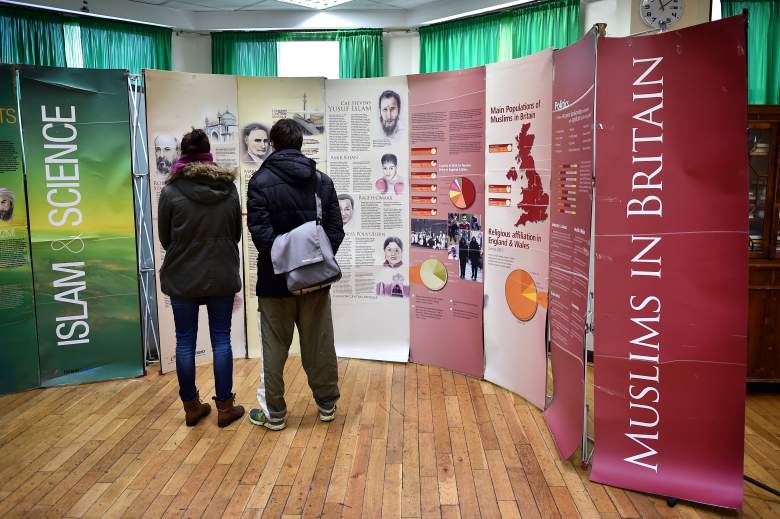 Visitors read information boards during an open day at Finsbury Park Mosque in London on February 1, 2015. Mosques around the UK opened their doors to the public on February 1 in an initiative led by the Muslim Council of Britain to reassure people concerned about possible links to extremism. (Getty)

According to its mission statement, the Finsbury Park Mosque, “is registered in the UK (charity No: 1136945, company No:7229018), serving the local community in Islington and surrounding Boroughs of North London, and working with everyone to promote dialogue and understanding in our multi-cultural society.”

The mosque says its vision statement is to “create an environment for the Muslim community in Finsbury Park that will allow them to worship and access community development initiatives in the areas of health, education, employment, social and cultural interaction.”

According to Islington Gazette, “The mosque in St Thomas’ Road, which reopened in 2005 under new chairman Mohammed Kozbar, has worked tirelessly to distance itself from its radical past.”

4. The Mosque Helped Victims After the Grenfell Fire & Was Visited By Prominent Politicians Like Jeremy Corbyn 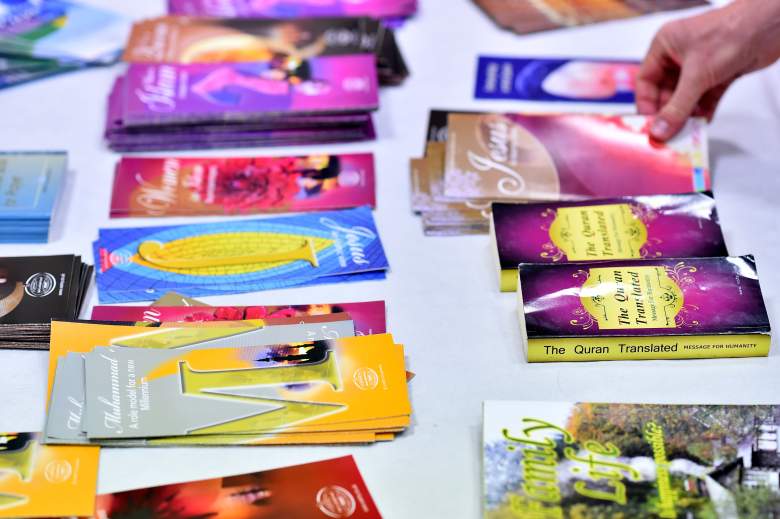 Leaflets about Islam and translated copies of the Koran are displayed on a table during an open day at Finsbury Park Mosque in London on February 1, 2015. Mosques around the UK opened their doors to the public on February 1 in an initiative led by the Muslim Council of Britain to reassure people concerned about possible links to extremism. (Getty)

The Islington Gazette reported that the mosque “was recently described by Islington North MP Jeremy Corbyn as a ‘wonderful community asset.'”

The mosque also helped victims of the Grenfell Tower fire in London.

5. The Chairman of the Mosque Called the Attack a ‘Terrorist Attack’

Mohammed Kozbar, chairman of Finsbury Park mosque, told The Sun: “Whoever did this, he did it to hurt people and it’s a terrorist attack.”

Kozbar added: “We call it a terrorist attack as we called it in Manchester, Westminster and London Bridge. The van drove over people who were leaving late prayers. They were gathering in Seven Sisters Road. I heard there are fatalities but I don’t want to jump to conclusions. My concern now is the casualties who have been affected.”

Police are treating the incident as a potential terrorist attack, confirmed The Sun.

Loading more stories
wpDiscuz
1
0
Would love your thoughts, please comment.x
()
x
| Reply
Finsbury Park Mosque, the site of a car ramming that may have targeted Muslims, has long been controversial for its ties to Al-Qaeda and other terrorists, and for its former preacher Abu Hamza.