A dog and his owner walk along the boardwalk on a hot day at Coney Island on June 13, 2017 in the Brooklyn borough of New York City. (Spencer Platt/Getty Images)

Happy first day of summer! Today we welcome the summer solstice, which is the longest day of the year. Here are 10 inspirational quotes about this time of warmth and light.

Today, the sun will shine directly over the Tropic of Cancer while the North Pole reaches its maximum tilt towards the sun, making it the longest day of the year. The farther north a person goes, the more daylight they can expect to have. The North Pole will have 24-hours of daylight, known as “the midnight sun.”

In the United States, the solstice will begin today at 12:24 a.m. EDT. According to Time and Date, “In terms of daylight, this day is 5 hours, 50 minutes longer than on the December Solstice.” The Washington Post writes that American cities can expect anywhere between 22 to 13 hours of daylight, depending on their latitude. The average duration of daylight is 12 hours/day, but this highly variable depending on geographic location.

Here are some fun, summer quotes to help you celebrate today:

1. “And so with the sunshine and the great bursts of leaves growing on the trees, just as things grow in fast movies, I had that familiar conviction that life was beginning over again with the summer.” – F. Scott Fitzgerald, The Great Gatsby

2. “Everything good, everything magical happens between the months of June and August.” – Jenny Han, The Summer I Turned Pretty

3. “In early June the world of leaf and blade and flowers explodes, and every sunset is different.” – John Steinbeck, The Winter of Our Discontent

4. “”Hot weather opens the skull of a city, exposing its white brain, and its heart of nerves, which sizzle like the wires inside a lightbulb. And there exudes a sour extra-human smell that makes the very stone seem flesh-alive, webbed and pulsing.” – Truman Capote, Summer Crossing

5. “In the summer, the days were long, stretching into each other. Out of school, everything was on pause and yet happening at the same time, this collection of weeks when anything was possible.” – Sarah Dessen, Along for the Ride

6. “The crickets felt it was their duty to warn everybody that summertime cannot last for ever. Even on the most beautiful days in the whole year – the days when summer is changing into autumn – the crickets spread the rumor of sadness and change.” – E.B. White, Charlotte’s Web

7. “The castle grounds were gleaming in the sunlight as though freshly painted; the cloudless sky smiled at itself in the smoothly sparkling lake, the satin-green lawns rippled occasionally in a gentle breeze: June had arrived.” – J.K. Rowling, Harry Potter and the Order of the Phoenix

8. “I have only to break into the tightness of a strawberry, and I see summer – its dust and lowering skies.” – Toni Morrison, The Bluest Eye

9. “Summer was on the way; Jem and I awaited it with impatience. Summer was our best season: it was sleeping on the back screened porch in cots, or trying to sleep in the tree house; summer was everything good to eat; it was a thousand colors in a parched landscape; but most of all, summer was Dill.” – Harper Lee, To Kill a Mockingbird

10. “Rest is not idleness, and to lie sometimes on the grass under trees on a summer’s day, listening to the murmur of the water, or watching the clouds float across the sky, is by no means a waste of time.” –
John Lubbock, The Use Of Life 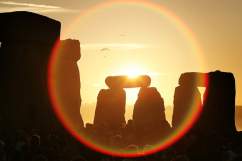 Read More
Holidays
Follow Heavy ↓
Happy first day of summer! Today we welcome the summer solstice, which is the longest day of the year. Here are 10 inspirational quotes about this time of warmth and light.