A police officer was stabbed multiple times at an airport in Flint, Michigan by a suspect, Amor Ftoui, who shouted “Allahu Akbar,” NBC News reported.

The officer, Jeff Neville, was initially listed in critical condition, but his condition was later upgraded to stable condition. The stabbing is now being considered a possible terrorist attack, according to NBC News investigative reporter, Tom Winter.

NBC News: Federal investigators are looking into the stabbing of a police officer at the Flint, MI airport as a possible act of terrorism.

However, while not ruling it out, the FBI said in a statement that it was too early in the investigation to determine whether the attack was terrorism.

The suspect has been identified as 49-year-old Ftouhi, of Montreal, Canada. Read more about him here.
The officer was on duty at the time, according to the Flint Journal.

The attack, which occurred on June 21, is still under investigation. It comes as a series of ISIS-fueled terrorist attacks have raised fears across Europe. The day before, a suicide bombing was foiled in Brussels, Belgium.

1. The Officer Is in Stable Condition After Being Stabbed in the Neck

From our affiliate in Flint and @KristenAguirre – stabbing victim has been identified as Lt. Jeff Neville. PC – @LinkedIn pic.twitter.com/Zp5uYVy3in

According to KJRH, the suspect stabbed the officer in the neck, leaving him in critical condition initially. His condition was later upgraded to stable.

The Flint Journal reported that a witness “saw a man detained near a knife and an officer on his knees and bleeding from the neck.” The officer was described as an “honorable man” who was a lieutenant, according to Flint Journal.

“The cop was on his hands and knees bleeding from his neck,” Ken Brown, who was dropping his daughter off at the airport, told the newspaper. “I said they need to get him a towel.”

CNN reported that the officer was also stabbed in the back. 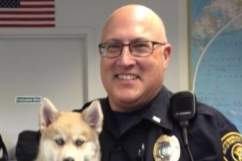 2. The Incident Is Being Investigated as Possible Terrorism

According to NBC News, the suspect is Canadian.

Ftouhi, 49, was identified at an early evening press conference. He is being charged with committing an act of violence at an airport, said David Lemisch, the acting U.S. Attorney for the Eastern District of Michigan. The charge carries a maximum penalty of 20 years in federal prison. It is not clear if he could face additional federal or state charges as the investigation continues. Ftouhi was expected to make his first appearance Wednesday in federal court in Flint, the U.S. Attorney’s office said.

According to prosecutors, Ftouhi walked up to Neville, who was in full uniform, and stabbed him in the neck. He then shouted “Allahu Akbar,” and referenced “killings in Syria, Afghanistan and Iraq,” the U.S. Attorney’s office said.

Officers were stationed around Flint’s City Hall as a precaution, according to AP.

In a statement, the FBI said:

This morning, law enforcement officers from a number of organizations, including the FBI’s office in Flint, Michigan, responded to Flint’s Bishop International Airport after receiving the report of a stabbing of an airport police officer who is presently considered to be in stable condition.

The suspect was taken into custody at the airport and is currently being questioned by law enforcement officers.

The FBI, with our local, state, and federal law enforcement partners, is jointly investigating this incident to determine the nature and motive for the attack. We are aware of reports that the attacker made statements immediately prior to or while attacking the officer, but it is too early to determine the nature of these alleged statements or whether or not this was an act of terrorism.

Fox News also reported that the attack is being investigated for possible connections to terror, although that has not been definitively determined.

3. The Airport Was Evacuated

Bishop International Airport released a statement on Facebook. It read, “Attention: there has been an incident at the airport. An airport police officer has been injured. All passengers are safe and are being evacuated at this time. Please check with your airline for potential cancellations or delays. We will release more information as we have it.”

About 800,000 people travel through the Bishop Airport in Flint, Michigan each year, according to airport statistics.

4. Law Enforcement Was Targeted in the Attack & the Suspect Had a ‘Blank Look’ on His Face

JUST IN: FBI is investigating stabbing at international airport in Flint, Michigan, as possible act of terrorism https://t.co/H8ZRN8x4Mj pic.twitter.com/o6c0voG0L0

The suspect in in custody.

According to ABC News, a witness described the suspect as having “a husky build and a ‘blank’ look on his face.”

5. The FBI Has Taken Over the Investigation

The FBI is in charge of the investigation. Michigan Governor Rick Snyder said on Twitter, “As we wait to learn more about the incident at Bishop Airport, please keep the attacked officer in your thoughts & prayers.”

. The FBI is the lead agency in this incident. MSP is providing resources to our Federal and local partners as this scene progresses.

State troopers and the ATF were also at the airport, which remained closed in the hours after the attack, according to ABC News.