More people voted early in Georgia’s 6th congressional district for the House seat special election than the amount that did for the 2014 general election.

The unprecedented figures were tallied by Georgia’s Secretary of State, and they showed that 140,000 voters either submitted a ballot in-person or via mail prior to the June 16 cutoff. A few more more paper ballots may be returned before Tuesday’s election.

The data found that a majority of the 140,309 submitted ballots for the June 20 runoff between Democrat Jon Ossoff and Republican Karen Handel came from those 50-years and older, and most of the accepted ballots were submitted by voters who didn’t identify with a political party in the last primary they voted in.

Those are massive numbers for a special congressional election, and high voter turnout for Election Day on June 20 is expected.

Michael McDonald, who works for the U.S. Elections Project and is an associate professor at the University of Florida, has been charting the data in the district every day since early voting started May 30. McDonald’s charts showed that early voters got out to a hot start, but slowly tapered off as the weeks continued. Initially, the district was on pace to outnumber those that voted early in the 2016 general election. But, as expected, it slowed down a bit.

Ossoff prevailed in that round of voting by a large margin, but because he failed to get 50 percent of the vote, it advanced to a runoff between Ossoff and Handel — the top-two vote getters in the field.

The fact that early voting numbers have almost been tripled just two months later signifies just how big of a deal the race to replace former Rep. Tom Price in the House is for both sides.

New York Times Political Analyst Nate Cohn said that while the data is very hard to predict, early voting turnout was up among Republican voters. In addition, many new voters registered in the district. Those are voters that Cohn said are “much likelier to be past GOP voters.” If they didn’t, Cohn said that it’s likely that the new voters lean Ossoff’s way.

All of that happened. Turnout was way up, especially among GOP vt. What wasn't easy to anticipate: so many new voters. 26% over all. pic.twitter.com/DCYZuudsTE

As Cohn and McDonald have suggested, the race remains a virtual toss-up with just days to go until in-person voting takes place. And past polls have indicated that, too.

The most recent poll, released by Opinion Savvy, showed Ossoff with an extremely-slim lead among the 537 likely voters that were surveyed. The poll had a 4.2 percent margin of error and found Ossoff with 49.7 percent support compared to Handel’s 49.4 percent with 0.9 percent remaining undecided.

The most recent polling figures are in line with many that have been released in recent weeks. A Survey USA poll released June 13 found the two candidates in a virtual tie days after they debated.

But there’s no doubt that Ossoff has gained ground on Handel in the district since the April 18 election. Polling averages have showed Ossoff swelling his lead to a 3.3 percent margin.

New SurveyUSA poll has Ossoff/Handel tied at 47%. Average continues to have Ossoff with a slight lead. https://t.co/fZvUqcSfxY pic.twitter.com/hK5Elkv4vf

The congressional race grabbed many national headlines, as it’s largely seen as a referendum on President Donald Trump and his policies so far.

Trump won the typically-red district by just 1 percentage point during the 2016 presidential election, which showed that Democrats could possibly stand a chance at flipping the district.

Outside contributors have responded in large numbers to make the special election the most expensive congressional race in history. Money has continuously poured into the race, with over $40 million being spent on advertising alone.

A Democrat hasn’t been elected to the House seat in the district since John J. Flynt Jr. won his sixth re-election bid in 1977. After that, Republican Newt Gingrich was elected, and it’s been held by the GOP ever since. 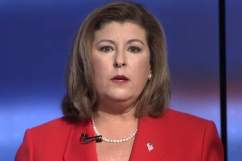 Read More
Politics, US Politics
Final data in Georgia's 6th congressional district runoff for the vacant House seat is in. It showed that well over 100,000 people have cast votes already.