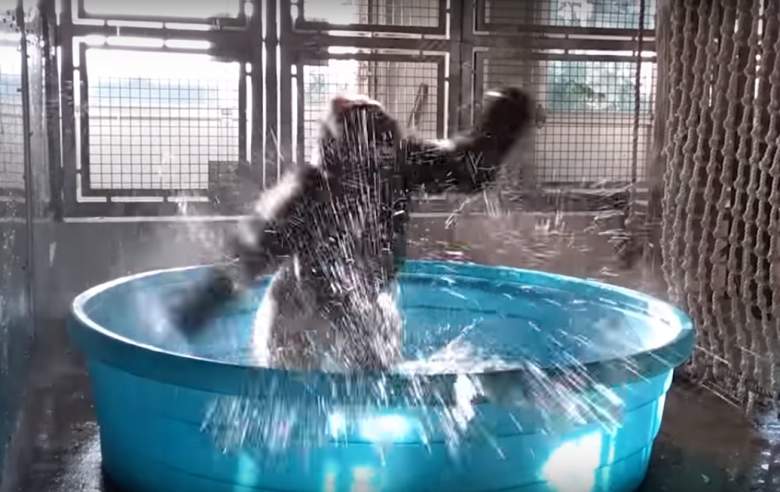 A video of a gorilla dancing in a pool to Michael Sembello’s “Maniac” has gone viral, and for good reason.

The video of the gorilla ecstatically dancing in circles inside of a pool was originally posted to YouTube by the Dallas Zoo without the song dubbed over it. The gorilla’s name is Zola, and the YouTube video had almost 100,000 views on the platform since June 20.

But then as it usually does, the internet saw even more opportunity.

Bob Hagh, a video producer at the Fort Worth Star-Telegram saw an chance that was almost too perfect to pass up. He took the video and dubbed “Maniac” from the 1980s movie Flashdance over the top of it.

The result? Something that works almost seamlessly and has taken the internet by storm.

Check the video out for yourself below:

I added some music to this. pic.twitter.com/UwjhTKpaeu

Zola happens to be the same gorilla that once before reached internet fame when he was filmed in 2011 breakdancing at the Calgary Zoo.

The Dallas Zoo told NBC Dallas-Fort Worth that enrichment therapy for gorillas “helps enhance the environment and lives of animals, like Zola, by providing them with mental and physical stimulation to increase natural behaviors.

“Enrichment can take many forms, but for this spunky great ape, it means playing and spinning in his favorite blue pool!”

According to the Dallas Zoo’s website, Zola is 14-years-old now and is a Western lowland gorilla. He’s the youngest member of the zoo’s four gorillas in the “bachelor troop.”

“When he isn’t hanging out in the South gorilla habitat, Zola spends his hours inside our roomy gorilla building,” Dallas Zoo’s Primate Keeper Ashley Orr wrote. “The big, blue pool featured in this video is one of the many enrichment items the gorilla keepers use to engage primates.”

Orr described Zola’s dancing as a “play behavior,” adding that “play is a natural behavior present in a wide array of animals.”

Read More
Videos, Viral
wpDiscuz
3
0
Would love your thoughts, please comment.x
()
x
| Reply
A video of Zola, a gorilla at the Dallas Zoo, has gone viral. In the video, Zola is dancing inside of a pool to "Maniac." Watch the video here.