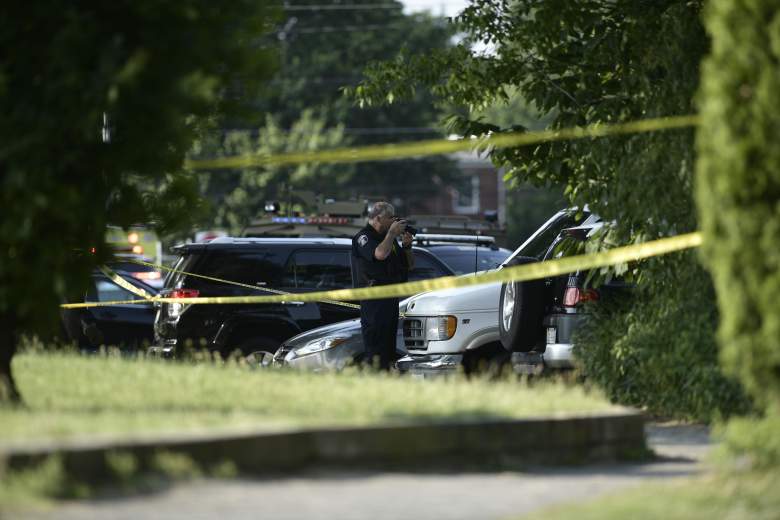 Police tape cordons off the scene of the shooting Wednesday morning. (Getty)

A gunman opened fire Wednesday morning at a Northern Virginia baseball field where Republican members of Congress were practicing, injuring Representative Steve Scalise and several others.

Scalise, who represents Louisiana’s first district, serves as the Republican Whip, the No. 3 position in the party’s House leadership. Scalise is reported to be in stable condition after being shot in the hip. He underwent surgery Wednesday morning.

The shooting took place at a field in the Del Ray neighborhood of Alexandria, Virginia, a suburb of Washington, D.C. Scalise and other members of Congress were practicing for the annual Congressional baseball game, which pits Republicans against Democrats. The game is scheduled for Thursday at Nationals Park in Washington, D.C.

Michael Brown, the chief of the Alexandria Police Department, said in a media briefing that five people were transported from the field with injuries. Brown said the shooting took place at 7:09 a.m. Wednesday.

Scalise was in surgery Wednesday morning and is expected to recover. The other people shot were:

Here’s what we know so far about the shooting:

1. Members of Congress Heard a ‘Rapid Succession of Shots’ as the Gunman Opened Fire

Senator Rand Paul, who was at the practice, told MSNBC’s Morning Joe that he was in the batting cage down the right field line at the field when he heard a “rapid succession of shots.” Paul added that he thinks he heard the gunman reload.

Paul said the perpetrator was wearing a blue shirt and the rifle sounded like an AR15.

Mo Brooks, U.S. Representative for Alabama’s 5th congressional district, used his belt as a tourniquet to stop the bleeding for Scalise, according to a report. Brooks is running for the Senate seat vacated by Jeff Sessions.

Bailey and Griner were both shot while responding to the shooting. House Speaker Paul Ryan, Democratic Leader Nancy Pelosi and a host of other officials heaped praise on Bailey and Griner, who they credited with saving countless lives.

You can watch Ryan’s speech on the House floor here:

You can watch Pelosi’s speech here:

Pelosi: "We will use this occasion as one that brings us together." https://t.co/jLDqTNhqIB

Paul said that the presence of Scalise’s Capitol Police security detail — provided to Scalise because of his position as a Congressional leader — prevented a “massacre.”

“When you have no way to defend yourself … the field was essentially a killing field,” Paul told CNN.

Senator Jeff Flake of Arizona was also at practice. Flake told reporters he called Scalise’s wife after the shooting to ensure that she didn’t hear about it through other means.

Congressman Roger Williams of Texas told reporters that one of his aides was also shot.

Jeff Duncan, the U.S. Representative for Tennessee’s 2nd congressional district, told Fox News that he spoke to the shooter prior to the shooting.

3. Steve Scalise Is out of Surgery & Was in ‘Good Spirits’ at the Hospital

Update from Majority Whip Steve Scalise's office… "in good spirits and spoke to his wife…" pic.twitter.com/UfNDq6zaJ4

Scalise’s office said in a statement that the Congressman was undergoing surgery Wednesday morning at MedStar Washington Hospital Center. The statement said Scalise spoke to his wife, Jennifer, on the phone, and was in “good spirits” prior to entering surgery.

“We ask that you keep the Whip and others harmed in this incident in your thoughts and prayers,” the statement said.

President Donald Trump and Vice President Mike Pence were among those who tweeted his support for Scalise after the shooting.

Rep. Steve Scalise of Louisiana, a true friend and patriot, was badly injured but will fully recover. Our thoughts and prayers are with him.

Karen & I are praying for @SteveScalise, the Capitol Police, & all hurt for a speedy recovery. Our hearts are with them & their loved ones.

Former Democratic Congresswoman Gabrielle Giffords, who was seriously injured when she was shot in the head while at an event in Arizona in 2011, also tweeted about the shooting.

My heart is with my former colleagues, their families & staff, and the US Capitol Police- public servants and heroes today and every day.

4. Capitol Police Engaged the Shooter in Gunfire & Later Got Backup from Alexandria Police 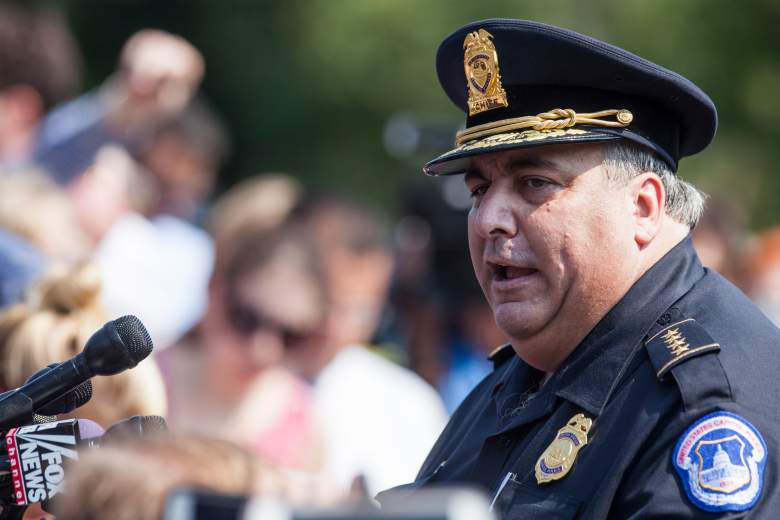 Capitol Police engaged the shooter in gunfire, according to Matt Verderosa, the Capitol Police chief. NBC News reported that two Capitol police officers were shot. Both are in stable condition.

Alexandria police officers arrived about three minutes later. The FBI is assisting in the investigation.

The shooting took place at Simpson Stadium Park in Alexandria. The field is home to the high school team at T.C. Williams High School, whose football team was depicted in the movie Remember the Titans.

The Congressional baseball game, which has taken place every year since 1909, is scheduled for Thursday at Nationals Park in Washington, D.C.

Republicans won last year’s game 8-7, snapping a seven-game losing streak. Scalise was among the GOP players who talked to Roll Call about his excitement for the upcoming game. You can watch the Roll Call video below.

“After last year, it’d been seven years since we won,” he said with a smile. “We need to even that score up.”

Congressman Joe Barton of Texas, the manager of the GOP team, told reporters outside the Capitol that “dozens, if not hundreds” of shots were fired, and that the shooting lasted five to 10 minutes.

Barton said the shooter shot at Congressman Trent Kelly of Mississippi, the team’s third baseman, and at Scalise, the second baseman.

Barton said Scalise is the team’s second baseman. Senator Jeff Flake told reporters that Scalise “dragged himself out of the infield” into the outfield after being shot in the left hip.

Hodgkinson was a Belleville, Illinois, native, according to his Facebook page. He owned a company, JTH Inspections, also called JTH Construction, and studied at Southern Illinois University-Edwardsville.

I'm here at the home of James T Hodgkinson, who is in custody in connection with a shooting at a congressional baseball game practice pic.twitter.com/8ILm1t9Y2a

Looks like authorities have showed up. Hodgkinson is reportedly dead. pic.twitter.com/nRrQHeWwGe

Hodgkinson was married, according to KMOV-TV.

His Facebook page includes several political posts, including one on May 24 asking for signatures on a Change.org petition calling for the Federal Energy Regulatory Commission to stop the NEXUS pipeline.

He also signed a petition on May 21 titled, “George H.W. Bush: Past Presidents Urge Congress to Launch Independent Investigation,” and shared that on his page as well.

On March 22 he wrote, “Trump is a Traitor. Trump Has Destroyed Our Democracy. It’s Time to Destroy Trump & Co.”

Loading more stories
wpDiscuz
21
0
Would love your thoughts, please comment.x
()
x
| Reply
New reports are coming in of a shooting occurring at a YMCA baseball field where GOP Congresspeople were playing in Del Ray, Alexandria, Virginia, a suburb of Washington, D.C.