But there was a third Special Agent protecting people from the attack: Henry Cabrera. “As we pray for those injured in Alexandria this morning, let us give thanks for Special Agents Crystal Griner, David Bailey, and Henry Cabrera whose heroic actions ended the attack and saved many lives,” wrote one Republican organization on Facebook, echoing the thoughts of many.

Hodgkinson, 66, of Belleville, Illinois, opened fire in the ballpark. He was a Bernie Sanders campaign volunteer who asked whether Republicans or Democrats were practicing before he started shooting from behind a chain-link fence at the ball diamond.

Here’s everything you need:

1. Cabrera Was Shooting From Behind the Dugout

Investigators search for evidence at the Eugene Simpson Stadium Park where a shooting had happened June 14, 2017 in Alexandria, Virginia. U.S. House Majority Whip Rep. Steve Scalise (R-LA) and multiple congressional aides were shot by a gunman during a Republican baseball practice. (Getty)

Cabrera was shooting at the gunman from behind the first-base dugout, where Sen. Jeff Flake was hiding.

Hodgkinson then moved along the chain-link fence along the third-base stretch towards home plate. Bailey and Griner were wounded, but they rushed Hodgkinson who was then pinned face-down on the pavement behind the third-base dugout.

Unlike Bailey and Griner, Cabrera was not injured during the shooting.

2. He Posted That the Shooting Was “F*cking Nuts” on Facebook

Yesterday was f-cking NUTS!!!! Many thanks to those who reached out to me yesterday. I’m proud of my TEAMMATES David Bailey and Crystal Griner. They took care of business!!!!! Prayers for Mr. Scalise and his family.

Bailey and Griner have not said anything about the shooting.

Bailey threw the first pitch at the Congressional Baseball game Thursday, despite being on crutches. Griner remained hospitalized as the game played with an ankle wound. The ball Bailey threw was then taken to the hospital and signed by Matt Mika, a lobbyist for Tyson Foods.

Mika was one of the victims of the shooting and was hospitalized after the attack. He worked as a lobbyist for Tyson since January 2011 where his title is the Director of Government Relations.

U.S. Rep. Steve Scalise was shot in the hip and undergoing surgery at MedStar Washington Hospital Center. He was initially listed in satisfactory condition but was then listed in critical condition after the surgery. He was in “good spirits” prior to surgery and spoke to his wife, Jennifer, on the phone, according to a statement from Scalise’s office.

Update from Majority Whip Steve Scalise's office… "in good spirits and spoke to his wife…" pic.twitter.com/UfNDq6zaJ4

Zack Barth, a Legislative Correspondent for the office of GOP Rep. Roger Williams of Texas, was also shot and hospitalized. He began as a political and operations intern for Jeb Bush in August 2015 and became a campus coordinator for Bush in January 2016.

Barth said he was okay over Facebook and thanked everyone for their thoughts and prayers. 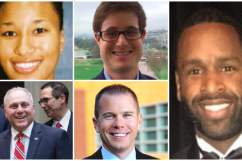 3. Henry Cabrera Is a Military Veteran

The shooter faced a formidable trio of protectors when he walked up to the chain-link fence surrounding the baseball diamond.

The man who posted the above photo on Facebook wrote, “This is Capital Police Officer Henry Cabrera and my beautiful wife Stephani Kelley- McNamara. Henry and Stephani went to school together many years back and have been great friends ever since. Henry was one of the brave officers who put his life on the line for our nation’s representatives by firing on the estranged assailant, ultimately killing him at the baseball field. It is a small world in which we live, and I’m very proud to know this veteran.”

A relative of Cabrera confirmed that he is a military veteran.

Cabrera’s Facebook page included a picture of himself dressed in fatigues as well as a photo of the 2nd Battalion, 39th Infantry Regiment at Fort Jackson on Sept. 12, 1994.

Bailey has worked as a Capitol Police officer since April of 2008 according to his LinkedIn page. He is ” responsible for the protection of Members of Congress, Officers of Congress, and their families as expanded by statute to the entire United States, its territories and possessions, and the District of Columbia.” He was also an administrator at the US Fish and Wildlife Service in Falls Church, Virginia, from 2005 to 2008. He graduated from North Carolina Central University in 2007 with a degree in physical education and was the president of Alpha Phi Alpha Fraternity and a member of the homecoming royal court, according to USA Today.

Griner went to Hood College in Maryland, where she played college basketball and was described by a former classmate as a “ferocious athlete.” As a freshman, she finished fourth on the team in scoring, averaging 10.2 points a game. By sophomore year, she was “in the upper echelon” of new players and was regarded for her “strength and athletic ability,” according to a biography provided to Heavy by Hood College. She earned rookie of the year honors for basketball in 2003. She also majored in Biology. 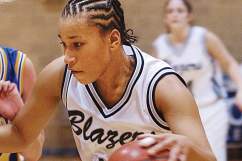 4. The Three Capitol Police Officers Were There to Guard Steve Scalise & Are Lauded as Heroes

Bailey, Griner, and Cabrera, who are in Scalise’s security detail, are all being celebrated for their efforts in stopping the shooter at the ballpark. All congressmen and congresswomen do not have armed guards, but Scalise does because he is a member of U.S. House leadership.

Both Bailey and Griner were wounded during the shooting, with Bailey treated and released for a minor injury and Griner being shot in the ankle.

Rep. Mo Brooks said the quick actions of the Capitol Police prevented what “very well could have been a large-scale massacre.” Brooks, who was on the field when the shooting began, recalls what happened to CNN.

The Capitol security guy, who had already been shot, who helped take down the shooter, came limping toward us in the outfield, totally ignoring his own wounds, to check on the person he was primarily responsible for, Steve Scalise. We insisted that he (the officer) go back and get attended to because he was bleeding, but he was doing his job. Those two security details, those two Capitol police officers, they showed incredible bravery — pistols against a rifle — from a 90- to 120-feet distance. As you know, that kind of distance heavily favors the rifle.

Many lauded the actions of Bailey and Griner, including President Donald Trump:

"Many lives would have been lost if not for the heroic actions of the two Capitol Police officers who took down the gunman." –@POTUS

“It is clear to me, based on various eyewitness accounts, that without these two heroes, Agent Bailey and Agent Griner, many lives would have been lost,” said Rep. Paul Ryan.

“There will be those who talk about what’s wrong with America, but in this case, Officers Griner and Bailey, we saw what’s right with America,” Rep. Rodger Williams said at a press conference. “We saw two people risk their lives to save the lives of others. We saw courage in the face of death, and we saw examples of why all Americans should be grateful every day for law enforcement officers around this country.”

Sen. Jeff Flake met with both Bailey and Griner at the hospital to thank them for their actions.

Just met with Capitol Police officers Crystal Griner and David Bailey at the hospital. Thanked them for saving my life.

Some felt that Cabrera wasn’t getting enough credit for his hand in protecting the congressmen and staffers.

There was a third officer there who should also be recognized. He just wasn't wounded. Special Agent Henry Cabrera.

Why did CBS @CBSThisMorning NOT mention HENRY CABRERA from the Capital Police for his heroic actions??

Many applauded the actions of all three Special agents, including USCP Chief Matthew R. Verderosa:

I want to commend Special Agents Crystal Griner, David Bailey, and Henry Cabrera for their heroic and appropriate response in protecting the Members and others today during their practice for the Congressional baseball game.

Cabrera is now being included on many lists of the heroes.

5. Cabrera Is a Father of Two

The cover photo of Cabrera’s Facebook page has his two children playing on instruments.

He’s also a fan of the Washington Redskins, according to the page.

Hodgkinson, the 66-year-old shooter from Belleville, Illinois, had a daughter and grandchildren. He and his wife Suzanne Hodgkinson also raised several foster children. He owned a home inspection business called JTH Inspections, also called JTH Construction, which he opened in 1976.

However, Hodgkinson also was growing angrier and angrier about the state of politics, penning letters to the editor and whipping up criticism on social media of the Republican Party and Donald Trump.

Loading more stories
wpDiscuz
1
0
Would love your thoughts, please comment.x
()
x
| Reply
Henry Cabrera was one of the Capitol Police heroes who, with Crystal Griner and David Bailey, shot at James Hodgkinson at the congressional baseball practice.