White supremacists are in outrage over the assassination attempt of Republican Congressman Steve Scalise by James T. Hodgkinson, an apparent liberal and Bernie Sanders supporter. SITE Intel Group Far Right/Far Left director Rita Katz writes that “white supremacists speculate [Hodgkinson] to be part of a ‘new breed’ of liberal that want to kill anyone who is Republican… while at the same time hoping the attacker is foreign in order to further argue in favor of Trump’s travel ban.”

1) White Supremacists speculate #Scalise shooter to be part of a "new breed" of liberal that "want to kill anyone who is #Republican" pic.twitter.com/jasauA67PJ

Scalise, who represents Louisiana’s first district, serves as the Republican Whip, the No. 3 position in the party’s House leadership. Scalise is reported to be in stable condition after being shot in the hip.

The shooting took place at a field in the Del Ray neighborhood of Alexandria, Virginia, a suburb of Washington, D.C. Scalise and other members of Congress were practicing for the annual Congressional baseball game, which pits Republicans against Democrats.

Michael Brown, the chief of the Alexandria Police Department, said in a media briefing that five people were transported from the field with injuries. He did not divulge their identities. Brown said the shooting took place at 7:09 a.m. Wednesday.

Senator Rand Paul, who was at the practice, told MSNBC’s Morning Joe that he was in the batting cage down the right-field line at the field when he heard a “rapid succession of shots” Morning Joe. Paul added that he thinks he heard the gunman reload.

Mo Brooks, U.S. Representative for Alabama’s 5th congressional district, used his belt as a tourniquet to stop the bleeding for Scalise, according to a report. Brooks is running for the Senate seat vacated by Jeff Sessions.

NBC is reporting that Scalise and the policemen are in stable condition. 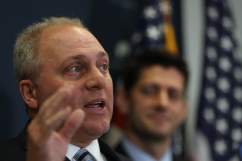