Jeff Sessions testifies before the Senate Judiciary Committee during his confirmation hearing on January 10, 2017 (Getty)

Attorney General Jeff Sessions is about to testify before Congress, where he will be asked about reports that he had a third conversation with the Russian ambassador during the Donald Trump presidential campaign. So what time will the testimony begin, and how can it be watched? Here are all of the details you need to know about the Jeff Sessions Congressional testimony.

TV CHANNEL: Jeff Sessions’ testimony will air on most major news networks including CNN, and it will also be broadcast on C-SPAN3. To find out what channels those are on your cable service, check out TV Guide’s listings. On that page, just hit the “change” button next to provider and enter the cable provider that you use. The page will then update to reflect your personal channel listings, and from there, you can hit Control F, type in “CNN” or “C-SPAN,” and find the network. If you have a cable log-in, you can also watch on CNN Go or C-SPAN’s website.

Jeff Sessions today is testifying before the Senate Intelligence Committee, the same committee that questioned former FBI Director James Comey last week. Sessions was originally scheduled to testify before the Senate Committee on Appropriations on Tuesday, but in light of recent events, it became clear that it was necessary for Sessions to address Congress specifically about the Russia probe.

“In light of reports regarding Mr. Comey’s recent testimony before the Senate Select Committee on Intelligence, it is important that I have an opportunity to address these matters in the appropriate forum,” Sessions told the Senate Committee on Appropriations this week, according to Reuters.

When he refers to recent testimony, the attorney general is talking about the fact that last week, James Comey said in an open hearing that he and the FBI earlier this year had reason to believe Sessions would have to recuse himself from the Russia probe, with Comey saying he couldn’t get into more details. CNN subsequently reported that Comey told Congress in a closed hearing that Sessions may have had a third interaction with Russian Ambassador Sergey Kislyak. The Department of Justice has disputed this report, and so Sessions will likely dispute it today.

“The facts haven’t changed; the then-Senator did not have any private or side conversations with any Russian officials at the Mayflower Hotel,” Department of Justice spokeswoman Sarah Isgur Flores told CNN. 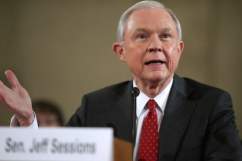 Loading more stories
wpDiscuz
0
0
Would love your thoughts, please comment.x
()
x
| Reply
Attorney General Jeff Sessions is about to testify before Congress. What time does it start, and what channel will it air on?