On June 19 we commemorate the freedom of slaves after the abolition of slavery in Texas and the Confederate South. Here are the most inspirational sayings about Juneteenth.

Juneteenth is a portmanteau of “June” and “nineteenth” and commemorates the date when the Union General Gordon Granger arrived at Galveston Island, Texas with 2,000 troops to establish a federal presence in Texas and officially free slaves in the once Republic.

Juneteenth is also known as Freedom Day or Emancipation Day.

Texas was the last to hear that the Civil War was over because it was very isolated geographically. In fact, the Army of the Trans-Mississippi did not surrender until June 2, 1865 despite the Civil War being declared over nearly a month earlier on May 9.

Here are the most inspirational quotes:

1. “…the 19th of June wasn’t the exact day the Negro was freed. But that’s the day they told them that they was free… And my daddy told me that they whooped and hollered and bored holes in trees with augers and stopped it up with [gun] powder and light and that would be their blast for the celebration.” – Haye Turner, former slave

3. “Whenever I hear anyone arguing for slavery, I feel a strong impulse to see it tried on him personally.” – Abraham Lincoln

5. “My people have a country of their own to go to if they choose… Africa… but, this America belongs to them just as much as it does to any of the white race… in some ways even more so, because they gave the sweat of their brow and their blood in slavery so that many parts of America could become prosperous and recognized in the world.” – Josephine Baker, African-American entertainer and activist

6. “The flag that was the symbol of slavery on the high seas for a long time was not the Confederate battle flag, it was sadly the Stars and Stripes.” – Alan Keyes

7. “Now I’ve been free, I know what a dreadful condition slavery is. I have seen hundreds of escaped slaves, but I never saw one who was willing to go back and be a slave.” – Harriet Tubman

8. “I would have the Constitution torn in shreds and scattered to the four winds of heaven. Let us destroy the Constitution and build on its ruins the temple of liberty. I have brothers in slavery. I have seen chains placed on their limbs and beheld them captive.” – William Wells Brown, prominent African-American abolitionist

9. “Slavery is theft – theft of a life, theft of work, theft of any property or produce, theft even of the children a slave might have borne.” – Kevin Bales, Professor of Contemporary Slavery at the University of Nottingham 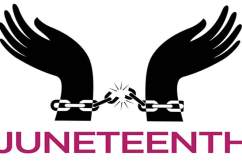 Read More
Holidays, Inspirational Quotes
wpDiscuz
4
0
Would love your thoughts, please comment.x
()
x
| Reply
On June 19 we commemorate the freedom of slaves after the abolition of slavery in Texas and the Confederate South. Here are the most inspirational sayings about Juneteenth.