Michael Tate Reed is accused of running over the Ten Commandments monument at the Arkansas State Capitol, while streaming the moment on Facebook Live.

You can watch the video below.

“Freedom,” the man shouts in the Facebook Live stream that ran on a Facebook page attributed to Reed. Reed’s page also posted a video in which he urges people to use a hashtag he created and makes rambling statements about religion.

He posted a series of videos to the page, including another one right around the time the monument was smashed.

Reed, 32, is also accused of running over the Oklahoma Ten Commandments monument in 2014. That case was widely reported, and he wrote a letter to The Tulsa World newspaper in which he openly discussed struggling with mental illness so severe he thought he saw Michael Jackson’s spirit in meat.

In that incident, he was accused of urinating on the Ten Commandments monument and making threatening comments about President Barack Obama.

A police officer witnessed the Arkansas incident on June 28, according to Arkansas Online. Reed was arrested at the scene and taken to a hospital before being booked into the jail on a slew of charges.

On YouTube, he shared video of preaching in a hospital.

He also posted this odd video.

On Facebook, his page contains rambling statements that make threats to Trump. “im a born again Christian whos a pentacostal Jesus Freak,” the Facebook profile says. On June 26, a post on the page reads, “I am a TERRORIST Who shall destroy many with the Fire of The Holy One of Isreal Yashua the Christ who alone is God YA Peace to Isreal forever for her King shall come and she shall be saved. And you oh fierce King of understand dark sentences shall be destroyed without hands yes you Donald Trump #CHECKMATE I’m not against service men and women I Thank them all for what they do. I’m against this whore nation that now lives in abominations before God.”

BREAKING: The Ten Commandments monument installed at the Arkansas Capitol has been toppled, shattered. What we know: https://t.co/XQZc92Dod0 pic.twitter.com/CXwCd6YDo0

“This is Michael Reed, and I’m a firm believer that salvation is that we not only have faith in Jesus Christ but that we obey the commands of God…” he says in one Facebook video, which was posted right around the time the monument was run over.

“But one thing I do not support is the violation of our Constitutional right to have the freedom that’s guarantees us separation of church and state because no one religion should the government represent. So … back at it again… so if you’re in support of this, you can talk about it using the hashtag checkmate, and also I’m using my own car that I paid for.”

You can read more about Michael Tate Reed here: 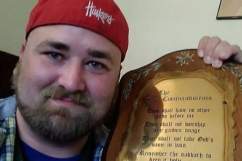 Read More
Breaking News, Crime, Oklahoma
Follow Heavy ↓
Michael Tate Reed is accused of running over the Ten Commandments monument at the Arkansas State Capitol and streaming it in a Facebook Live video.