A 22-year-old man is in custody after a Muslim teenager was found beaten to death in Virginia in what authorities are calling a road rage incident. According to the Fairfax County Police Department, Darwin Martinez Torres is facing murder charges in relation to the killing of Nabra Hassanen, 17, in Herndon, Virginia, in the early hours of June 18.

Nabra had been the subject of a missing persons case at around 4 a.m. on June 18 with police saying that she was last seen walking near a mosque with friends. Many Muslims pray late into the evening and early hours during Ramadan. Then, Nabra had a verbal fight with a man in a car. That man is thought to have attacked and killed her. Torres was picked up by police shortly after Nabra was first reported missing.

1. A Facebook Post About Nabra’s Killing Said 2 Men Were Swinging Baseball Bats at a Group of Girls

Isra Chaker, who appears to know Nabra’s family, wrote a Facebook post that describes Nabra’s killing. Nabra and her friends were getting food while on break from praying at the All Dulles Area Muslim Society (ADAMS) Center in Herndon, Virginia, on June 17.

While going back to the center, Chaker says that Nabra and her friend were accosted by two men in a car. Chaker said:

A car pulled up, an altercation took place (the nature of which is still unknown) and then the man came out with a baseball bat swinging at the girls. Nabra was assaulted and was left behind. She then went missing (presumably kidnapped by the suspect) and was found dead this afternoon.

The Washington Post reports that Nabra’s body was found in a pond in Sterling, Virginia. A baseball bat was recovered nearby. The medical examiner says that Nabra’s cause of death is blunt force trauma to the head and neck.

On June 21, Washington D.C. police were called to a memorial for Nabra at Dupont Circle after someone set fire to it. The New York Daily News reports that a 24-year-old man named Justin Solomon was arrested in relation to that incident. Authorities do not believe that bias played a role in the vandalism.

2. Authorities Are Not Investigating the Case as a Hate Crime

In a press release, Fairfax County Police said that they are not investigating Nabra’s murder as a hate crime. Fairfax County Officer Tawny Wright had earlier told the media, “At this point, there doesn’t seem to be indication this was a bias incident. It looks like they got into a dispute over something.”

Though Fairfax County Prosecutor Ray Morrogh said, “Let’s wait until we get all the information and I’ll make the judgement.” NBC Washington reports that authorities believe that Nabra was the victim of road rage.

This tragic case appears to be the result of a road rage incident involving the suspect, who was driving and who is now charged with murder, and a group of teenagers who was walking and riding bikes in and along a roadway.

Our investigation at this point in no way indicates the victim was targeted because of her race or religion.

Virginia Lt. Gov. Ralph Northam said, via the Post, “There is absolutely no place for this kind of violence in our Commonwealth. Every Virginian should feel safe and welcome in our communities, and no parent should ever have to experience such a heartbreaking tragedy. As the police investigation continues, I urge all Virginians to keep Nabra’s friends and family in their hearts.”

Everything is written & (unfortunately) Allah called upon a beautiful soul – Nabra. May she Rest In Peace and Allah grant her paradise.

NBC4’s Julie Carey reports that Torres is in the United States illegally, according to ICE. The agency has “lodged a detainer” against Torres.

The Washington Post reports, citing a member of Torres’ family, says that the suspect works in construction. Torres has a four-year-old son and a girlfriend. The family member told the Post that she is “shocked and mystified” about the charges.
Darwin Torres is a resident of Sterling, Virginia. The Post says he was in a park in Sterling with his grandmother until around 11:30 p.m. on June 17.

While Nabra was still considered a missing person, Torres was arrested after he was spotted “driving suspiciously” close to the search, reports NBC Washington.

Torres is being represented by a public defender. The Washington Post reports that Torres spoke through a Spanish translator from jail. He will appear in court again on July 19.

4. Nabra ‘Always Talked With a Smile’

Nabra worked at a McDonald’s in Reston, Virginia. A coworker, Usman Anwar Khan, told Buzzfeed that Nabra “was a really nice girl” who “always talked with a smile.”

A crowd funding page that was set up for Nabra’s family has raised nearly $150,000, at the time of writing. The page says:

This morning the ADAMS community in Sterling, VA lost 17 year old Nabra, in an apparent brutal murder during qiyam time.

Her body was found this afternoon and members of the ADAMS community are working together to raise money for her family in this time of need.

Investigation is still pending and donors are encouraged to follow news outlets as more details are released.

It’s believed that the missing teen is one of our students and while we await further news about this very sad incident, I would also ask that you refrain from engaging in rumor and speculation on social media about today’s events.

I wanted you to be aware of these developments and to inform you that we will have crisis counselors at the school beginning tomorrow morning. Our thoughts and prayers are with the victim’s family.

Nabra’s father, Mahmoud Hassanen, told NBC Washington what he would say to Torres if he got the chance. “Why you kill my daughter? For what? She didn’t do anything to anybody. I raised my kids to love everybody.” Nabra was the oldest of four siblings.

5. This Comes on the Same Day That Multiple Muslims Were Injured in a Ramming Attack in London

Nabra’s body was found on the same day that nearly a dozen Muslims were injured in a ramming attack in London. The incident occurred close to a mosque in Finsbury Park, London. One person, described as a white male, has been arrested in relation to the attack. The Metropolitan Police Service said that they are treating the attack as a “major incident,” reports CNN. 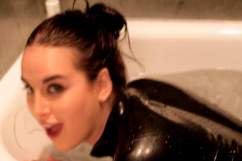 Loading more stories
wpDiscuz
101
0
Would love your thoughts, please comment.x
()
x
| Reply
A 22-year-old man is in custody after a Muslim teenager was found slain in Virginia.