Investigators work the scene of a multiple shooting at an area business in an industrial area on June 5, 2017 northeast of downtown Orlando, Florida. (Getty)

A “disgruntled employee” opened fire at a business in Orlando on Monday, killing five people before fatally shooting himself, authorities say.

The 45-year-old gunman has been identified as John Robert Neumann Jr., who was fired by Fiamma Incorporated in April, Orange County Sheriff Jerry Demings said at a press conference.

Demings said the “tragic” shooting is being investigated as a “workplace violence” incident.

Police said the scene is stable. The shooting occurred about 8 a.m. at Fiamma Inc., 2427 Forsyth Road, which is in a large industrial area along with a number of other businesses.

Deputies can be seen focusing their shooting investigation on Fiamma building. The company makes awnings for campers and vans. @WESH pic.twitter.com/b3NGqU4g63

The Orange County Sheriff’s Office responded to the scene within “just two minutes,” according to Demings.

The shooting is not believed to be related to terrorism, Demings said. The sheriff said four men and a woman were killed. Seven other employees who were in the building were not injured.

“It’s a sad day here for us once again in Orange County,” Demings said. “Our hearts and prayers go out to the families of the victims.”

The five victims have been identified by police as: Robert Snyder, 69; Brenda Montanez-Crespo, 44, Kevin Clark, 53; Jeffrey Roberts, 57 and Kevin Lawson, 47.

1. The Shooter Was Armed With a Handgun & a Knife When He ‘Shot 5 Innocent People’ at the Business

The gunman, 45, was armed with a handgun and a knife when he “shot five innocent people,” Orange County Sheriff Jerry Demings told reporters at a press conference. Demings said it is not believed that the shooter used the knife on the victims.

The sheriff’s office received a 911 call reporting an active shooter at 8:03 a.m. Deputies were at the scene within two minutes, Demings said. The deputies found three men and a female who were deceased. A fifth victim, a man, was found alive and was taken to a local hospital, where he was pronounced dead.

“We have no indication that this subject is a member of any type of subversive organization, or participant in any type of terror organization,” Demings said. “This is likely a workplace violence incident.”

"We have no indication that this subject is a participant in any type of terror organization," Sheriff says on Orlando shooting suspect pic.twitter.com/IM4ZqJLLn9

Details about the victims have not yet been released.

A woman whose sister works at Fiamma told WKMG that the shooting occurred there. She saw at least one person who had been killed.

The woman said her sister was inside the bathroom when the shooting occurred.

“We’re just going to embrace her and not leave her alone and just be there as a family,” Adams told reporters. “It’s unbelievable that it could happen in a small business.” 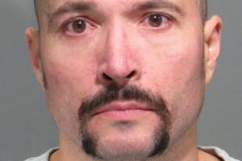 2. The Shooter Has a ‘Minor’ Criminal History & Was Accused of Battery on a Co-Worker in 2014, Police Say

Orange County Sheriff Jerry Demings said, “The individual in question is a former employee. He was fired sometime in April of this year. He was a disgruntled employee who came back here this morning.”

Police have not released the reason the gunman was fired.

Demings said the 45-year-old gunman has a “minor” criminal history, including charges like possession of marijuana, driving under the influence and misdemeanor battery.

According to Demings, police responded to another “workplace violence” incident involving the suspect at Fiamma in 2014. Demings said the gunman “allegedly battered another employee,” but no charges were filed. Demings told reporters it is not believed that the victim in that 2014 incident was one of the victims in the shooting.

Further details about the gunman, including his name, have not yet been released. The exact motive is also not yet known.

Shelley Adams, whose sister works at Fiamma, told reporters that the surviving employees were taken to a nearby fire training facility to be interviewed by investigators.

3. Fiamma Is an Orlando-Based Company That Makes Awnings for Recreational Vehicles

Fiamma Inc. is an Orlando-based company that makes awnings for residential vehicles and campers, according to its website:

FIAMMA is one of the world’s largest manufacturers of RV awnings for motor coaches, fifth-wheels, trailers, camper vans, and sport utility vehicles. FIAMMA awnings combine durability, corrosion resistance, and aerodynamic design. The result is a light-weight, very pleasing, and long lasting design that has made FIAMMA a top producer of awnings for over 30 years. Manufactured with hand-built craftsmanship, FIAMMA takes pride in producing products for our customers, which are easy to operate with minimal upkeep and maintenance.

It is a small company with about 10 full-time employees, Shelley Adams, whose sister works at the business, told WKMG-TV. Adams said the company also uses temporary workers.

The company is a subsidiary of Fiamma Worldwide, which is based in Italy.

“Our awnings are manufactured in our factory in Cardano al Campo, in Italy,” the business says on its Facebook page. “With a Fiamma awning you can double the living space of your RV in less than one minute and enjoy a cool and covered open space. Our awnings combine state of the art technology with original Italian Design for an elegant, durable and affordable awning.”

It has been in operation since 1991, according to state records.

4. A Large Police Presence, Including Federal Agents, Is in the Area With Roads & Businesses Shut Down

A law enforcement official wipes her eyes at the entrance to the shooting crime scene in Orlando, Florida on June 5, 2017. (Getty)

There is a large police presence at the area with roads and several businesses shut down in the Forsyth Road area. Forsyth is closed from University and State Road 50, the Florida Department of Transportation said.

The FBI Joint Terrorism Task Force was at the scene, WESH-TV reports. But WKMG-TV reports it was not a terror-related incident.

Agents from the Bureau of Alcohol, Tobacco, Firearms and Explosives (ATF) also responded.

BREAKING: Special agents from ATF Orlando Field Offices are on scene at #Orlando shooting incident to assist our partners @OrangeCoSheriff.

The commercial area includes several businesses, including Gerber Collision and Glass and Restaurant Equipment World. It is also near Full Sail University.

Just arrived at scene of reported shooting at business on Forsyth Rd near Hanging Moss. No other details. pic.twitter.com/qe4omx1IAO

Orange County Mayor Teresa Jacobs was also at the scene.

Crime scene investigators could be seen going into Fiamma just before 11 a.m.

5. The Shooting Comes Nearly a Year After a Gunman Killed 49 People & Wounded 53 Others in a Terror Attack at the Pulse Nightclub

Orlando police at the Pulse Nightclub, where at least 50 people were killed this morning. (Getty)

The shooting comes nearly a year after an ISIS-inspired gunman, Omar Mateen, shot and killed 49 people at the Pulse nightclub in Orlando. Mateen also wounded 53 people before he was fatally shot during the June 12, 2016, incident.

“Over the past year, the Orlando community has been challenged like never before. I have been briefed by our law enforcement officials on this tragic incident and Ann and I are praying for the families who lost loved ones today,” Florida Governor Rick Scott said in a statement. “I ask all Floridians to pray for the families impacted by this senseless act of violence. I will remain in contact with the Orlando law enforcement community throughout the day as more information is made available.”

“We are all on heightened alert from the tragic incidents across the globe. We cannot connect this incident to any global terrorism,” Sheriff Jerry Demings said.

Police in the United States have been on high alert since that attack, and Orlando authorities were anticipating having a higher security presence in the area in the lead-up to the anniversary of the Pulse shooting, WKMG-TV reports.