Two escaped inmates are at large in Georgia after allegedly overpowering and killing two guards on a prison bus. The suspects have been named as Ricky Dubose, 24, and Donnie Russell Rowe, 43. Authorities say at around 5:45 a.m. on June 13, the two men overpowered two guards. This happened while they were being transported along Georgia Highway 16 between the towns of Eatonton and Sparta. One of the men, it’s unclear who, is accused of pulling the trigger, killing both guards. The two then hijacked a car and sped away from the area.

Putnam County Sheriff Howard Sills says that the two men are armed with the guards’ Glock .40 guns. The public is urged to call 911 if Dubose and Rowe are sighted. They are driving a 2004 dark green Honda Civic with a Georgia license plate reading RBJ660. When last seen, the car was headed west towards the town of Eatonton.

Sheriff Sills told the media, “We have no idea where these guys went… We need somebody to find these individuals and call 911 immediately.” The pair broke into a house during their escape and have changed clothes.

Waiting for prisoners to get off Georgia DOC bus at Putnam Co Sheriff's Office. They witnessed deadly shooting of 2 correctional officers pic.twitter.com/gHCCY6um3m

Baldwin County Sheriff Bill Massee had earlier told the Telegraph in Macon that there were 32 other inmates on the bus.

2. Dubose Was Found Guilty of Robbing a Disabled Veteran

WSB-TV reports that Dubose is a member of the white supremacist Ghostface Gangsters gang. He’s serving time for aggravated assault, burglary, theft, trespassing, armed robbery and fleeing police. The station says that Dubose is serving 20 years. He is a native of Madison County, Georgia.

Fox Atlanta’s Randy Travis reports that Dubose had been sentenced for robbing a disabled veteran. Online Athens reported at the time that the victim was shot in the hand during the robbery. Dubose got 20 years due to the prior convictions he had amassed.

According to a Facebook page that appears to belong to Dubose, he puts Ghostface Gangster as his employer. That page also says that Dubose studied music at Athens Technical College and attended Madison County High School.

3. Rowe Is Serving Life Without the Possibility of Parole

Rowe is serving life without the possibility of parole for aggravated assault and armed robbery in 2002, reports WSB-TV. Like Dubose, he was serving his time in Baldwin State Prison. Rowe is a native of Lewisburg, Tennessee.

Dubose maintained three Facebook pages. On one, where the last update was in January 2013 and Dubose was apparently about to get out of prison, he made numerous references to a woman named Jamie. He wrote, “I got Jamie on my mind, I love you and I’m a be home soon.” Just a couple of days later, Dubose said, “Sick of your games Jamie, it’s over.”

Meanwhile on another page, a female frequently posts jokingly on Dubose’s Facebook page. That couple have a baby together. The page with the most recent update shows a photo of Dubose from October 2015.

5. The Slain Prison Guards Have Been Named as Christopher Monica & Curtis Billue

Our thoughts & prayers are with the Putnam County Sheriff’s Office, along with their families & friends, this morning. pic.twitter.com/hgAiptohhT

The Georgia Department of Corrections has identified the two slain guards as Christopher Monica, 42, and Curtis Billue, 58. Monica had worked for the department since 2007 while Billue was hired in 2009. The guards were shot dead on board the bus.

A press release from the Georgia Department of Corrections says that Monica had been working at Baldwin State Prison as a Sergeant. Since July 2016, Monica had been in the Transportation Unit out of Milledgeville, Georgia. In addition to that, Monica worked part-time at Augusta State Medical Prison.

While Curtis Billue had worked in the transportation unit since March 2013. Billue was also a sergeant at Baldwin State Prison following a period at the Georgia Diagnostic Classification Prison.

The statement concludes with the words, “Both officers were known for their unwavering commitment to their job and their love of family.” 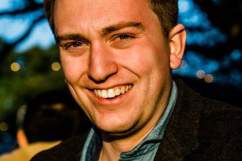