Congressman Steve Scalise is still recovering in the hospital after being shot in the hip during GOP baseball practice in Alexandria, Virginia on Wednesday.

The most recent official medical update on Congressman Scalise is that he remains in critical condition. This update came from the hospital that is currently treating Scalise, MedStar Washington Hospital Center, at about 8:15 p.m. Eastern on Thursday night.

“Earlier today, Congressman Steve Scalise underwent a second surgery related to his internal injuries and a broken bone in his leg. He remains in critical condition,” the hospital informs, “But has improved in the last 24 hours. The Congressman will require additional operations, and will be in the hospital for some time. At the request of the family, we will continue to provide periodic updates.”

House Speaker Paul Ryan offered an update of his own during an interview with CNN‘s Jake Tapper on EricBurnett Out Front. “He’s got a ways to go,” Ryan said of Scalise, “He’s going to recover. [But] it’s going to take him some time.” Tapper also interviewed House Minority Leader Nancy Pelosi who, along with Ryan, projected a spirit of political unity in the wake of the Congressman’s shooting.

Watch the full interview below.

“When we evaluate the needs of our members its about protecting the members and their constituents as well,” Pelosi said, “Tonight we’re all Team Scalise.” The House Minority Leader also referred to him as a “lovely man.”

Ryan echoed the sentiment, telling Tapper that “What we’re trying to do is tone down the rhetoric, lead by example and show people we can disagree with one another, we can have different ideas without being vitriolic, without going to such extremes.”

Prior the start of the Congressional baseball game on Thursday night, members of the Democratic and Republican teams knelt together in prayer near second base, which is where USA Today reports that Scalise would have been playing. The crowd added to the excitement by chanting “USA! USA!”

Instead of wearing hats that represented their home teams, players on both teams wore Louisiana State University hats in honor of Scalise, a Louisiana Republican.

Members of Congress gather near second base prior to the start of tonight's annual Congressional Baseball game. https://t.co/anBTo0Gkr1 pic.twitter.com/xesX3QgDm4

President Donald Trump, who visited Scalise in the hospital on Wednesday, also delivered a videotape statement prior to the game, providing an update on the Congressman’s condition and praising those who are playing in his honor.

“By playing tonight,” he said, “You are showing the world that we will not be intimidated by threats, acts of violence, or assaults on our democracy. The game will go on.”

The Democrats went on to defeat the Republicans 11-2, according to CNN. After the game was over, however, and Democratic manager Mike Doyle was presented the winning trophy, he gave the trophy back to the Republicans and manager Joe Barton, telling them to keep it in Scalise’s office until he returned.

Congressional Democrats won the baseball game, but gave the trophy to GOPers to put in the office of Congressman Steve Scalise. ?? ⚾️ 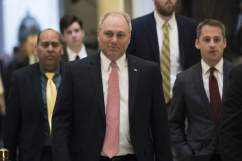 Loading more stories
wpDiscuz
7
0
Would love your thoughts, please comment.x
()
x
| Reply
Congressman Steve Scalise remains in critical condition after being shot in the hip at a GOP baseball practice, but is reportedly improving.