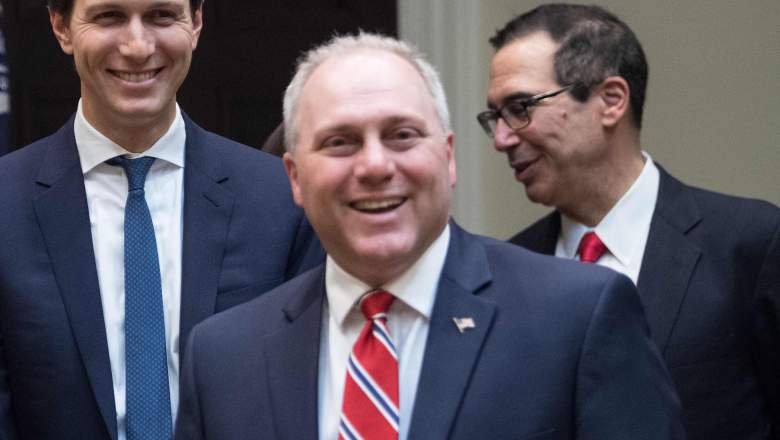 Jared Kushner (2nd L), son-in-law and senior adviser to US President Donald Trump, smiles as House Speaker Paul Ryan (L) jokes with reporters as House Majority Whip Steve Scalise (2nd L) and Treasury Secretary Steve Mnuchin look on before a meeting of the House and Senate leadership with Trump in the Roosevelt Room at the White House in Washington, DC, on June 6, 2017. (Getty)

Two Capitol police officers who were at the scene of a Congressional staff members’ baseball practice when a gunman showed up are being credited as heroes for preventing things from becoming much worse.

Crystal Griner and David Bailey, the two officers, were there to protect Republican Congressman Steve Scalise, who was shot in the incident.

The gunman stormed a congressional baseball practice in Virginia and opened fire, leaving a trail of wounded. He has not yet been identified and was arrested at the scene.

How important were the Capitol police?

Without Scalise's security, much of the GOP Congress could have been massacred cuz they were not armed.

1. The Capitol Police Officers Saved Lives, According to Senator Rand Paul & Others

Republican Sen. Rand Paul told MSNBC’s “Morning Joe” that “he heard as many as 50 shots. Paul described seeing shots land near aides who had taken cover on the ground,” according to The Hill.

– Everyone is okay
– Single shooter, in custody
– Capitol Police saved the day here

As staffers tried to get away from the gunfire, the Capitol police officers acted heroically, Paul said.

“Paul credited Capitol Police, who were there to protect Scalise, with saving lives,” The Hill reported. One female and one male Capitol police officer were shot while returning fire.

Sen. Flake believes two of Rep. Scalise’s security detail were shot: one female officer and one male officer who was returning fire pic.twitter.com/bsvV0sxFga

The baseball practice was for a charity baseball game.

2. Multiple People, Including Scalise and the Two Officers Were Wounded

According to the Hill, “Two Capitol Police officers on protective detail were also reportedly shot in the incident.” However, it was later revealed that, although both were injured, only Griner was shot.

Scalise, the House Majority Whip, was shot in the hip, according to Fox News.

Rep. Mo Brooks used a tourniquet to stop Scalise’ bleeding, reported Fox. Scalise was in stable condition at the hospital, according to WJLA.

“There were a number of congressmen and congressional staffers lying on the ground, and at least one of them was wounded,” CNN reported.

There were no reports of fatalities.

3. The Capitol Police Shot the Gunman

Congressional baseball game for charity is one of my favorite D.C. events. Hopefully the show goes on tomorrow. pic.twitter.com/tuRLwVUAo5

The Capitol police officers shot the gunman at the scene, according to Fox News.

There were reports on Fox News that the gunman might be dead, but this was not yet clear. His motive was unclear. CNN reported he was in custody.

According to CNN, “Scalise is the first member of Congress to be shot since former Arizona Rep. Gabby Giffords was shot in January 2011.”

4. The Man Asked Another Representative If ‘Republicans or Democrats Were Practicing’

.@RandPaul: Rep. Scalise goes down. We can see him but we can’t get to him. Really nobody could get to him until the gunman was brought down pic.twitter.com/ulH5teVyvc

An eerie comment made to Republican Rep. Ron DeSantis may indicate a political motive. He told Fox News that, right before the shooting, a man approached him and asked whether Republicans or Democrats were practicing.

Then, shots broke out.

5. The Shooting Was Called a ‘Deliberate Act’

.@POTUS statement on Scalise shooting: "We are deeply saddened by this tragedy. Our thoughts & prayers are with the members of Congress…" pic.twitter.com/d7xuF6GyXz

CNN reported that the shooting was being called a “deliberate act.”

The shooter was described as a white male who was behind the third base dugout at one point and didn’t say anything when he opened fire, according to CNN.

Loading more stories
wpDiscuz
0
0
Would love your thoughts, please comment.x
()
x
| Reply
Rep. Steve Scalise was shot during a mass shooting at a Congressional basseball practice in Virginia but two Capitol police in his security detail shot the gunman.