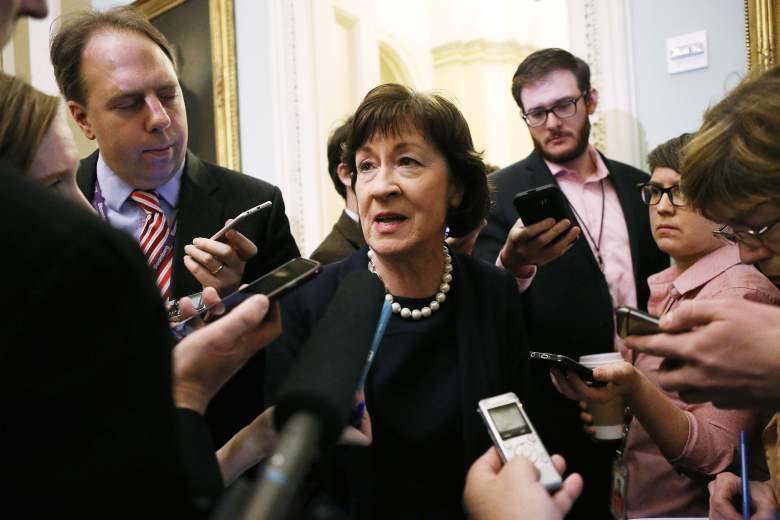 Susan Collins speaks to the media after the Senate voted to confirm Betsy DeVos as education secretary on Capitol Hill on February 7, 2017. (Getty)

Susan Collins is a Republican senator from Maine who serves as a member of the Senate Select Committee on Intelligence. This means she has played a major role in the ongoing investigation into potential ties between the Donald Trump campaign and the Russian government, and she will be questioning Attorney General Jeff Sessions during an open hearing on Tuesday.

Although Collins is a Republican, she has criticized President Donald Trump quite a bit, especially during the 2016 presidential election. She comes from a state that voted for Hillary Clinton over Donald Trump in November, with Clinton winning 47.8 percent of the vote compared to Donald Trump’s 44.8 percent. There have been rumors that she will run for governor of Maine in 2018.

Here’s what you need to know about the relationship between Susan Collins and Donald Trump.

1. During the Election, She Said She Would Not Vote for Trump

During the presidential election, Susan Collins was one of the Republican politicians who did not support Donald Trump for president.

A lot of Republicans said they wouldn’t support Donald Trump after the leaked Access Hollywood tape on which Trump could be heard bragging about sexually assaulting women. But Collins announced she would not support Trump two months before the release of this tape, penning an opinion piece for The Washington Post in August 2016 titled “Why I cannot support Trump,” in which she says that Trump is not suited for office.

“My conclusion about Mr. Trump’s unsuitability for office is based on his disregard for the precept of treating others with respect, an idea that should transcend politics,” she wrote. “Instead, he opts to mock the vulnerable and inflame prejudices by attacking ethnic and religious minorities. Three incidents in particular have led me to the inescapable conclusion that Mr. Trump lacks the temperament, self-discipline and judgment required to be president.”

Those three incidents are Trump’s mocking of a disabled reporter, his attacks on a Mexican judge, and his feud with a Gold Star family.

“Some will say that as a Republican I have an obligation to support my party’s nominee,” Collins wrote. “I have thought long and hard about that, for being a Republican is part of what defines me as a person. I revere the history of my party, most particularly the value it has always placed on the worth and dignity of the individual, and I will continue to work across the country for Republican candidates. It is because of Mr. Trump’s inability and unwillingness to honor that legacy that I am unable to support his candidacy.”

2. She Did Not Support the President’s Travel Ban

When Trump ended up carrying a version of this out with his travel ban in January, Collins opposed it.

“Undoubtedly improvements could be made to our refugee screening process, but the world-wide refugee ban set forth in the executive order is overly broad and implementing it will be immediately problematic,” Collins said in a statement in January. “…In addition, while it is appropriate to consider religious persecution when reviewing a request for refugee status, a preference should not be given to people who practice a particular religion, nor should a greater burden be imposed on people who practice a particular religion.”

3. She Supported the Decision to Fire James Comey

One issue decision of Donald Trump’s that Susan Collins has supported, though, was the firing of James Comey.

Collins said in May that she agreed with the decision due to how Comey handled the Hillary Clinton investigation.

“Today’s announcement is likely the inevitable conclusion of Director Comey’s decision last July to bypass the longstanding protocols of the Justice Department and publicly announce the reasons he had decided not to recommend an indictment of Hillary Clinton and to offer his personal views of Mrs. Clinton’s actions,” Collins said in a statement. “That decision, while well-intentioned, embroiled Director Comey into political controversies that unfortunately continued to this day.”

Collins went on to say that she doesn’t think this Comey firing should be interpreted as Trump trying to stop the FBI’s investigation.

“Any suggestion that today’s announcement is somehow an effort to stop the FBI’s investigation of Russia’s attempt to influence the election last fall is misplaced,” Collins said. “The President did not fire the entire FBI; he fired the director. I have every confidence that the FBI will continue to pursue its investigation. In addition, I am certain that the Senate Intelligence Committee, on which I serve, will continue its own bipartisan investigation and will follow the evidence wherever it leads.”

4. She Says Trump Allegedly Asking Comey to Drop the Flynn Investigation is Outrageous

Although Susan Collins supported the firing of James Comey, she has expressed concerned at some of the information that has since come to light about the Comey firing.

In particular, Collins has said that if Trump truly did ask James Comey to drop the investigation into Michael Flynn, this is an outrage.

She also said that the Senate Intelligence Committee needs to have access to any tapes that may exist of conversations between James Comey and Donald Trump.

5. She Says Trump May Have Thought It Was Normal to Speak With Comey One-on-One

In his Congressional testimony, James Comey said that he was made extremely uncomfortable during a number of one-on-one conversations between himself and President Trump, especially when Trump allegedly asked Comey for his loyalty.

Collins has an interesting explanation for this, saying that Trump may have been lead to believe that it’s normal to talk to the FBI director one-on-one like this because Comey pulled Trump aside to speak to him in January.

“I wonder if perhaps that made the President think that whenever there is some conversation to be had with the FBI director that it should be one-on-one because he had two subsequent one-on-one meetings as well as other phone calls with the FBI director,” Collins said on CNN. “That doesn’t make it right, but ironically perhaps the FBI’s actions in that first meeting sent a signal to the President that this is how their interactions should take place.”

Collins went on to say that in some cases she thinks Trump’s behavior is due to the fact that he has no political experience.

“This reflects the fact that this is the first President in our history who has had neither a military nor a political background, and I think he just does not fully understand or appreciate the boundaries and that it is totally wrong — I’ll go beyond inappropriate,” Collins told CNN.

Loading more stories
wpDiscuz
1
0
Would love your thoughts, please comment.x
()
x
| Reply
Susan Collins is a Republican senator from Maine, but she does not always agree with President Donald Trump.