Inside at least four of President Donald Trump‘s golf clubs around the world, a framed copy of a 2009 Time Magazine with him on the cover is prominently displayed to guests.

The text on the cover labels Trump and his reality TV show “The Apprentice” a “television smash.” Below that, another headline in all capital letters says that Trump is “HITTING ON ALL FRONTS … EVEN TV!”

But the problem with that cover, as The Washington Post reported June 27, is that it’s fake. That’s right, the Time issue dated March 1, 2009 that greets club members is completely fabricated, a spokeswoman for the magazine told The Post.

“I can confirm that this is not a real TIME cover,” Kerri Chyka, company spokeswoman, said in an email to The Post.

There actually wasn’t even a Time magazine issued March 1, 2009, and no single issue of the magazine during that year featured Trump on the cover.

As The Post article noted, the fabricated cover features some notable mistakes, including a thinner red border and no white border next to the red.

The fabricated cover may not have been such a big deal had Trump not publicly lambasted media members on numerous occasions for being “fake news.” Or, if Trump had not given a speech at CIA headquarters just one day after taking office saying he holds the “all-time record in the history of Time Magazine” for appearing on the cover.

“I have been on their cover, like, 14 or 15 times,” Trump said in his remarks. “Like, if Tom Brady is on the cover, it’s one time, because he won the Super Bowl or something, right? I’ve been on it for 15 times this year.”

Watch a video of the interaction below:

It’s not the first time Trump’s made claims without supplying facts that support them. He’s often boasted about the crowd sizes at rallies and his inauguration and touted his philanthropy work.

In response to the fake Time cover, the internet has eaten it up. Sports Illustrated sent out a tweet encouraging users to put themselves on a cover of its magazine while others were a little more harsh on the matter.

Can't believe it took people this long to figure out the Time Magazine hanging in Trump's golf courses is fake. pic.twitter.com/Oqu1xEdO7X

Real Trump Time Magazine cover (left) vs the Photoshopped one (right) he has hanging in his golf clubs… ? pic.twitter.com/bNVEEocM6q 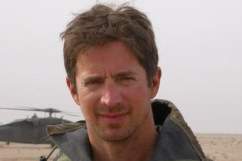