Durings reports of a helicopter attack on Venezuela’s Supreme Court, a video featuring Oscar Perez emerged stating his intention to remove President Nicolas Maduro from power. According to the BBC, a helicopter flew over the Venezuelan Supreme Court and justice and interior ministries yesterday and dropped grenades.

According to NBC News, Maduro claimed that the helicopter had been stolen and that the alleged attack was “terrorism.” Other video released shows Maduro’s reponse to the helicopter incident, including the use of rubber bullets and explosives on government protesters. Maduro also claimed that one of the pilots of the helicopter used to fly for his former Interior Minister, Miguel Rodriguez Torres, who he accused of working for the CIA.

Protests in Venezuela have been going on since January when Maduro arrested multiple opposition leaders and ceased dialogue between those outside his government.

Venezuelans, dear brothers: we speak on behalf of the State. We are a coalition of military, police, and civilians. In the search of balance and opposing this transitional criminal government. We are not and do not have any political tendency. We are patriots, nationalists, and institutionalists. This battle is not against the rest of the State security forces. It is against the impunity imposed by this government. It is against tyranny. It is against the deaths of the youths that fight for their legitimate right. It is against hunger and lack of healthcare. It is against fanatism. This fight is for life, this fight is for the hope we build. It is not vengeance but justice and our conscious that drives us to make the change. We make this distinction with the color of truth and of Jesus Christ, who is with us. This is the reason we make a call to all Venezuelans, from east to west, from north to south, to accompany us in this force of fight, and go out to the streets in Caracas. And in the interior of the country, to each military base, so that we can see ourselves as brothers once again. So that we may reunite as brothers with our national armed forces. And together, we retake our beautiful Venezuela. In this day, we are making an aerial and land deployment with the sole purpose of giving back democratic power to the people. And in this, comply and enforce the laws to reestablish the constitutional order. It’s because of this that we adhere to Articles 305 and 333 of our Magna Carta. It is our duties as state security officials to we disarm this gang of thugs to restore peace to the people of Bolivar. President Maduro, we demand your immediate resignation along with all your ministers and that general elections be called immediately. Brother in arms, we have two choices: to be judged tomorrow by our consciousness and the people, or to free the people from this corrupt government. We are warriors of god and our mission is to serve the people. Long Live Venezuela!

However, some Venezuelans have pointed out that the video may be fake or something more sinister, as Perez was an actor and producer for a Venezuelan movie called Muerte Suspendida, or “Suspended Death,” which was funded by the CICPC, the national intelligence agency of Venezuela.

Above is a video of Perez being interviewed about the movie. Hours after the video was released, Perez was seen flying a CICPC helicopter over the Supreme Court with a banner attached that read, “350 Liberty.” The reference is to Article 350 of the Venezuelan constitution, which reads: “The people of Venezuela … shall disown any regime, legislation or authority that violates democratic values, principles and guarantees or encroaches upon human rights”. 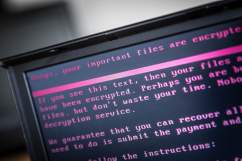