Tensions grew Sunday at a “Trump Free Speech Rally” as the Portland Police threw pepper balls at anti-fascist (ANTIFA) counter-protesters. You can see that moment in the video above. Police had previously told the public they would take any means necessary to ensure the rally stayed peaceful.

Projectiles being thrown at opposing groups or police will result in police action, including impact weapons or chemical munitions.

Several of the weapons seized so far today. pic.twitter.com/U6z2jO0BVu

Officers have made an arrest and seized several weapons from the suspect. pic.twitter.com/5IUUvqLHii

A compilation of conservative groups rallied in the city plaza to enact their “freedom of speech” rights at the “Trump Free Speech Rally.”

The host of the event, Joey Gibson (aka Patriot of Prayer) says in the Facebook event that the groups purposely chose to hold the rally in “one of the most liberal areas on the West Coast” in support of President Donald Trump.

The Portland Police Bureau has been under high pressure in the last month, and even more so in the last nine days because of the two men who were killed and one hurt after being stabbed on public transportation.

The attacker, Jeremy Christian, 35, was charged with aggravated murder and attempted murder after slitting the throats of Rick Best, 53, and Taliesin Myrddin Namkai Meche, 23, who tried to stop him from harming two Muslim women. 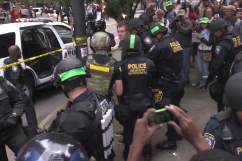