A video showing a violent standoff between the employees at a Burger King and an unruly customer has gone viral.

The video shows an unidentified man yelling at the employees of the fast food chain, knocking various items off the front counter and onto the floor. The man also appears to be wearing a cast on his right leg. Though it is difficult to make out the entirety of what he is saying, it is clear that at one point he calls the woman behind the counter a “b*tch” and demands he be given his order immediately.

A male employee then comes out from behind the counter and approaches the man, who proceeds to push him back and say the phrase “You ain’t got sh*t on me mother f**ker.” According to Crime Online, the man can also be heard saying “Spray that sh*t n**ger” to the male employee. The verbal exchange then led to a physical altercation, in which the man was punched in the face twice by the same employee.

He quickly falls to the floor where another customer in a white shirt begins to kick and stomp on him with his foot. Watch the full video below. Be advised that the video contains violence and graphic language.

A third employee comes out from behind the counter with a Taser and proceeds to shock the man multiple times in the back while he is still on the floor. The man makes an attempt to attack the employee, but falls over in the process. A bystander can be heard off camera saying “Be careful!” At the 0:58 mark in the video, a customer in a red t-shirt approaches and slaps the man in the face while he is on the floor.

The man seems disoriented by this, and the final moments of the video show him to be less combative as he is kicked out of the Burger King. Still, the employee armed with the Taser continues to use the weapon, and ensure that he leave without posing anymore harm to the customers or the other employees.

This isn’t the first time this man has caused trouble at a fast food establishment. According to ABC13, who broke the story, an eyewitness claimed that the man had previously made a visit to the same Burger King, where he insulted the employees with vulgar language. In this instance, the man was pepper-sprayed by an employee instead of tased.

The video was uploaded to YouTube on Sunday, June 11th, and has since gotten over 38,000 views. ABC 13 reports that the man was not arrested for his actions, but that officers did in fact confiscate the pepper-spray and the stun gun from the Burger King staff. “Definitely don’t recommend that,” said Jonah Nathan, the owner of Ranger Guard and Investigations, referring to the use of these weapons without proper training.”Unless you’re trained in it, it’s something that can be hurting yourself,” he said. “Once someone goes into the full fight mode, you don’t know what can happen.” 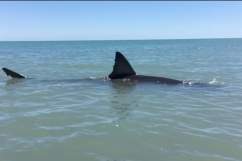 Loading more stories
wpDiscuz
32
0
Would love your thoughts, please comment.x
()
x
| Reply
A video of a man getting into a fight with the employees of a Burger King has gone viral. Click here to watch and learn about the fight.