Two tourists were mugged while walking through the French Quarter in New Orleans on Saturday night. According to NY Daily News, the victims were jumped by four men around 9:00 p.m. as was recorded by a surveillance camera on the street.

As can be seen in the video, the tourists, both men, were walking down the street (they enter the frame at the 1:35 mark) before two of their attackers ran up behind them. The tourist on the left, wearing dark pants and a dark shirt, was the first to be struck, as he was punched in the head and quickly held in a chokehold. The second tourist, wearing a tan shirt and white pants, is struck in the back of the head soon after, and causing him to fall facedown on the sidewalk.

Two other men then enter the frame at this point, and aid the others in rummaging through the pockets of the two tourists. One of the men, who can be seen wearing a backwards baseball cap, can be seen patting down the tourist on the floor with a handkerchief, perhaps in an attempt to wipe fingerprints after going through his pockets. Watch the full video below.

The other tourist is thrown down and all four attackers exit the frame at the 1:55 mark. That being said, one of the initial attackers– the one who struck the second tourist in the back of the head– returns to the scene of the crime and tugs into his body; presumably, in an effort to turn him over onto his back. The tourist remains on his face, however, and the slight tug reveals a pool of blood beneath where his face was. He exhibits movement throughout the rest of the video, particularly in his right arm, but remains in his original position.

At the 2:45 mark, a man wearing a white shirt and tie enters the frame, followed by another bystander wearing a backpack. The man in the tie can be seen making the 911 phone call that informed New Orleans Police about the attack.

CBS News reports that the tourists were transported to a local hospital afterwards, where one remains in critical condition. Their names have yet to be released to the press. Police Superintendent Michael Harrison told CBS News that the suspects are now wanted on second-degree robbery charges because of the severity of the injuries, particularly to the second tourist. “The eyes of the community caught this,” Harrison explained to WWLTV, “Everybody’s going to know exactly who you are.” 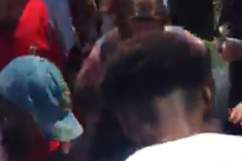