Protesters Interrupt Donald Trump And Are Led Out By Police As Supporters Grab For Their SignsIndivisible Iowa protesters disrupted a Make America Great Again rally by President Donald Trump in Cedar Rapids, Iowa on Wednesday. Security escorted the group after disrupting the president's speech by blowing whistles.2017-06-23T19:13:11.000Z

A group of protesters were escorted out by security at President Donald Trump’s “Make America Great Again” rally in Cedar Rapids, Iowa Wednesday. 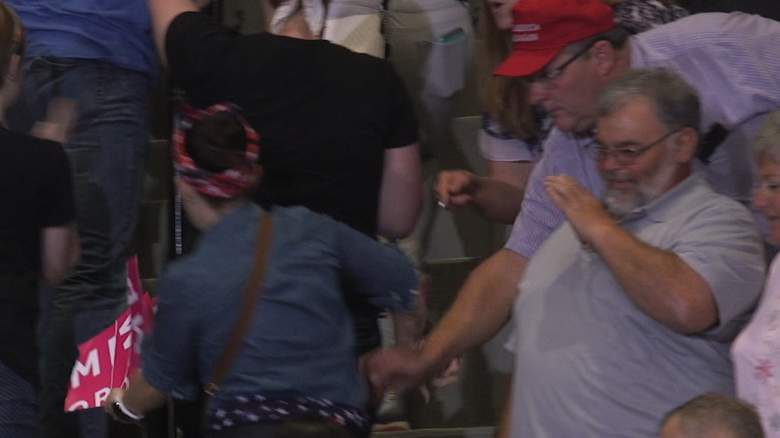 Some in the group were wearing Indivisible Iowa shirts, and Indivisible Iowa was also responsible for organizing a protest event for the rally on Facebook. This group’s main mission is “resisting the Republican congressional and executive agenda through organization and direct action,” as seen on their website.

Co-sponsoring the protest were other Iowa based groups like Americans for Democratic Action Iowa and Progress Iowa along with national organizations like Planned Parenthood and Women’s March.

Before the president’s rally on Wednesday the White House scheduled Trump to visit Kirkwood Community College to discuss advancements in high-tech agriculture.

Trump was accompanied by Agriculture Secretary Sonny Perdue and Commerce Secretary Wilbur Ross, and the three toured the community college’s agriculture program. Kirkwood Community College is the largest two-year agriculture program in the country, so the president and two secretaries took a look at the school’s high-tech equipment to learn about technological and management practices when it comes to farming.

This is part of the president’s administration marking “technology week.”

This is President Trump’s first trip to Iowa as president and the second for Perdue as the head of the USDA. Last month Perdue came to Boone, Iowa delivering his first major farm policy address as Agriculture Secretary.